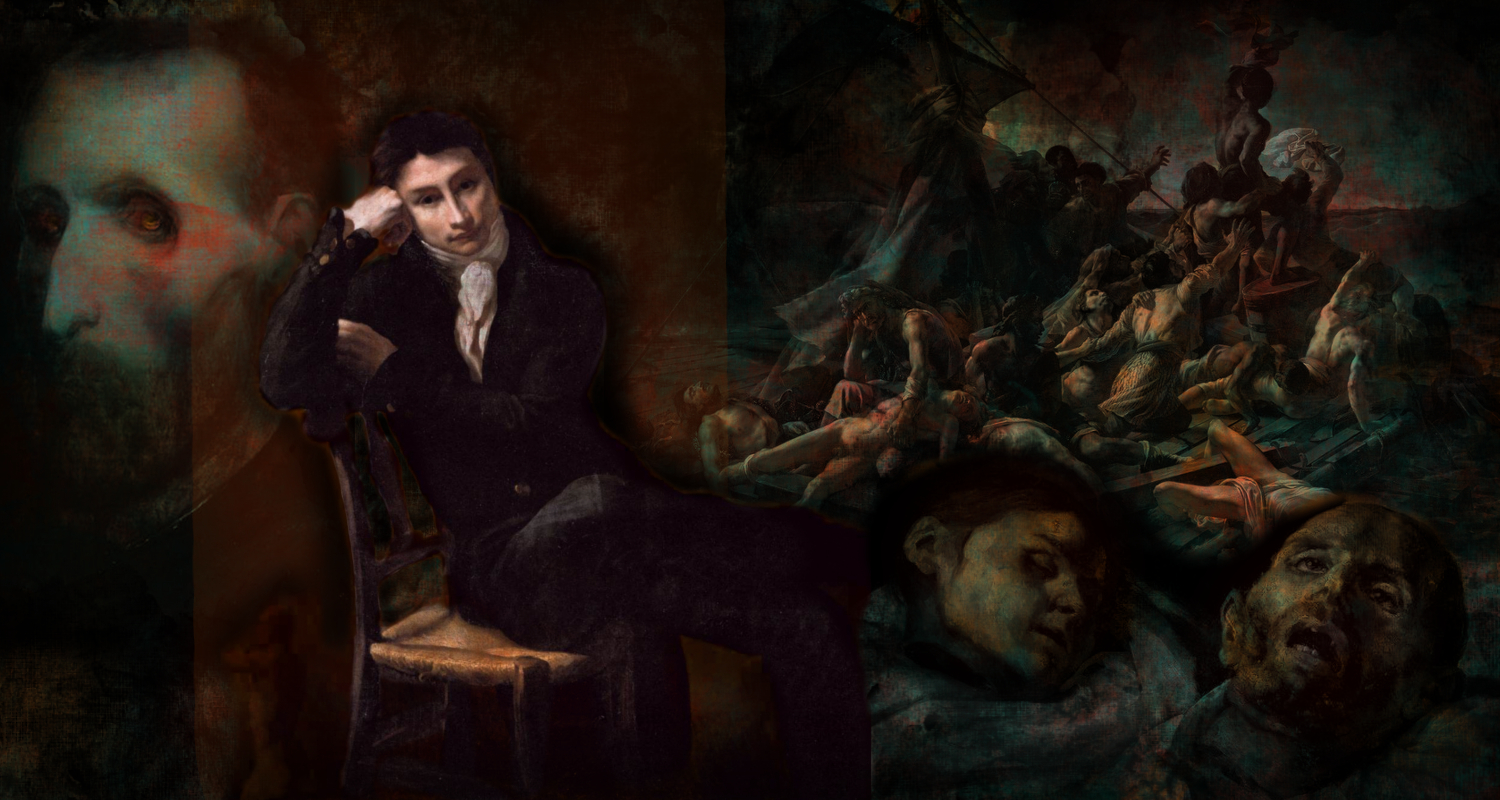 Jean-Louis André Théodore Géricault (26 September 1791 – 26 January 1824) was an influential French painter and lithographer, known for The Raft of the Medusa and other paintings, most notably today for portraits of the insane and still lifes of dismembered body parts. Although he died young, he was one of the pioneers of the Romantic movement. 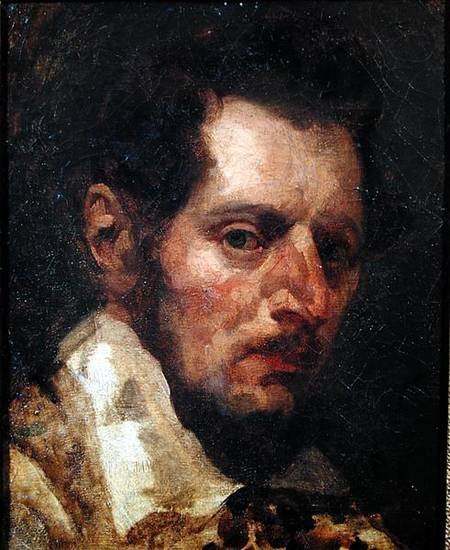 Born in Rouen, France, Géricault was educated in the tradition of English sporting art by Carle Vernet and classical figure composition by Pierre-Narcisse Guérin, a rigorous classicist who disapproved of his student’s impulsive temperament yet recognized his talent. Géricault soon left the classroom, choosing to study at the Louvre, where from 1810 to 1815 he copied paintings by Rubens, Titian, Velázquez and Rembrandt. During this period at the Louvre, he discovered a vitality he found lacking in the prevailing school of Neoclassicism. Much of his time was spent in Versailles, where he found the stables of the palace open to him, and where he gained his knowledge of the anatomy and action of horses. 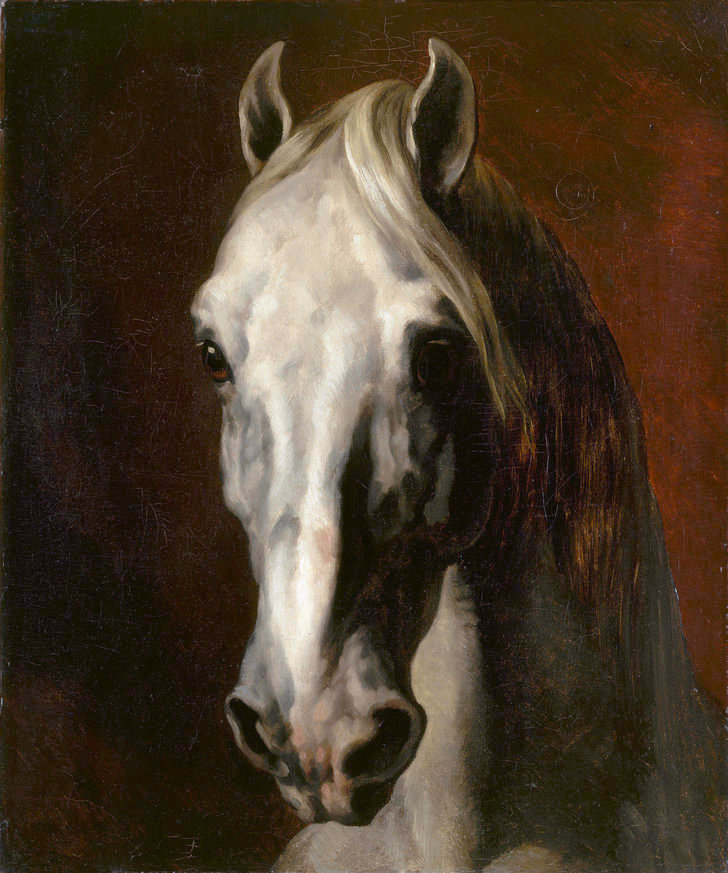 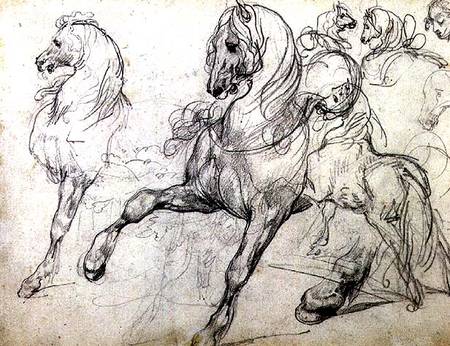 Géricault’s first major work, The Charging Chasseur, exhibited at the Paris Salon of 1812, revealed the influence of the style of Rubens and an interest in the depiction of contemporary subject matter. This youthful success, ambitious and monumental, was followed by a change in direction: for the next several years Géricault produced a series of small studies of horses and cavalrymen.

He exhibited The Wounded Cuirassier at the Salon in 1814, a work more labored and less well received. Géricault in a fit of disappointment entered the army and served for a time in the garrison of Versailles. In the nearly two years that followed the 1814 Salon, he also underwent a self-imposed study of figure construction and composition, all the while evidencing a personal predilection for drama and expressive force.

By 1816, the young artist traveled abroad to Italy. The excursion was prompted in part by the desire to flee from a romantic entanglement with his aunt, a beautiful and artistically sensitive young woman. To Géricault, an only child saddened by the loss of his mother, she was at first more sister than aunt. Then, slowly but inexorably, their tendresse grew into desperate and incestuous sexual love. The situation, let alone the emotion, could never resolve itself, and so Géricault left, shaved his head and began to live a reclusive, monastic life. His travels to Rome, Naples, and Florence, ignited in him a fascination with Michelangelo. Rome itself inspired the preparation of a monumental canvas, The Race of the Barberi Horses, a work of epic composition and abstracted theme that promised to be “entirely without parallel in its time”. In the event, Géricault never completed the painting, and returned to France. In 1821, he painted The Derby of Epsom.

Géricault continually returned to the military themes of his early paintings, and the series of lithographs he undertook on military subjects after his return from Italy are considered some of the earliest masterworks in that medium. Perhaps his most significant, and certainly most ambitious work, is The Raft of the Medusa (1818–1819), which depicted the aftermath of a contemporary French shipwreck, Meduse, in which the captain had left the crew and passengers to die.

The incident became a national scandal, and Géricault’s dramatic interpretation presented a contemporary tragedy on a monumental scale. The painting’s notoriety stemmed from its indictment of a corrupt establishment, but it also dramatized a more eternal theme, that of man’s struggle with nature. Géricault had thoroughly researched the subject by reading a pamphlet written by two of the survivors; he went to hospitals and morgues to study the dying and the dead (and even severed body parts which he let decay in his studio) and he set a raft out on the sea to see how it rode the waves. He also worked from live models and interestingly, the artist Eugène Delacroix was one of them. He is the corpse lying face down, arms outstretched, in the center of the composition.

The classical depiction of the figures and structure of the composition stand in contrast to the turbulence of the subject, so that the painting constitutes an important bridge between neo-classicism and romanticism. The painting ignited political controversy when first exhibited at the Paris Salon of 1819, as critics saw it as a repellant pile of corpses. For a respected artist to treat such an abject subject—dying survivors of a shipwreck—with such dignity was beyond shocking at the time. Such a large format (at nearly 23-by-16 feet) was usually reserved for heroic depictions of scenes and narratives from history, religion, or classical mythology. But the painting, which has hung in the Louvre since 1824, the same year as the artist’s untimely death, had more fans than detractors, and it remains relevant nearly 200 years later. Today, it could be read as a disturbing reminder of capsized vessels that have spilled hundreds of migrants into the Mediterranean Sea and of the grim reality of the current refugee crisis at large.

After his return to France in 1821, Géricault was inspired to paint a series of ten portraits of the insane, the patients of a friend, Dr. Étienne-Jean Georget, a pioneer in psychiatric medicine, with each subject exhibiting a different affliction. There are five remaining portraits from the series, including Insane Woman. The paintings are noteworthy for their bravura style, expressive realism, and for their documenting of the psychological discomfort of individuals, made all the more poignant by the history of insanity in Géricault’s family, as well as the artist’s own fragile mental health.

His observations of the human subject were not confined to the living, and he created some remarkable still-lifes—painted studies of severed heads and limbs. Many of these studies were used in the creation of The Raft Of The Medusa, but were also used in many other of his works. 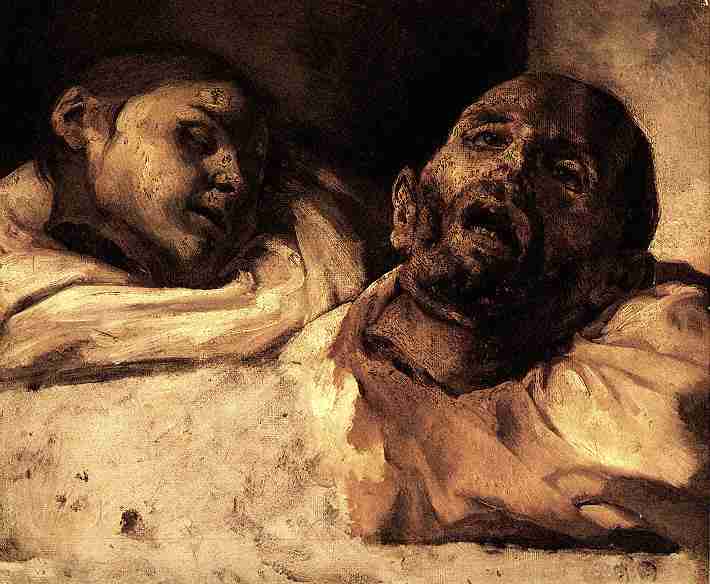 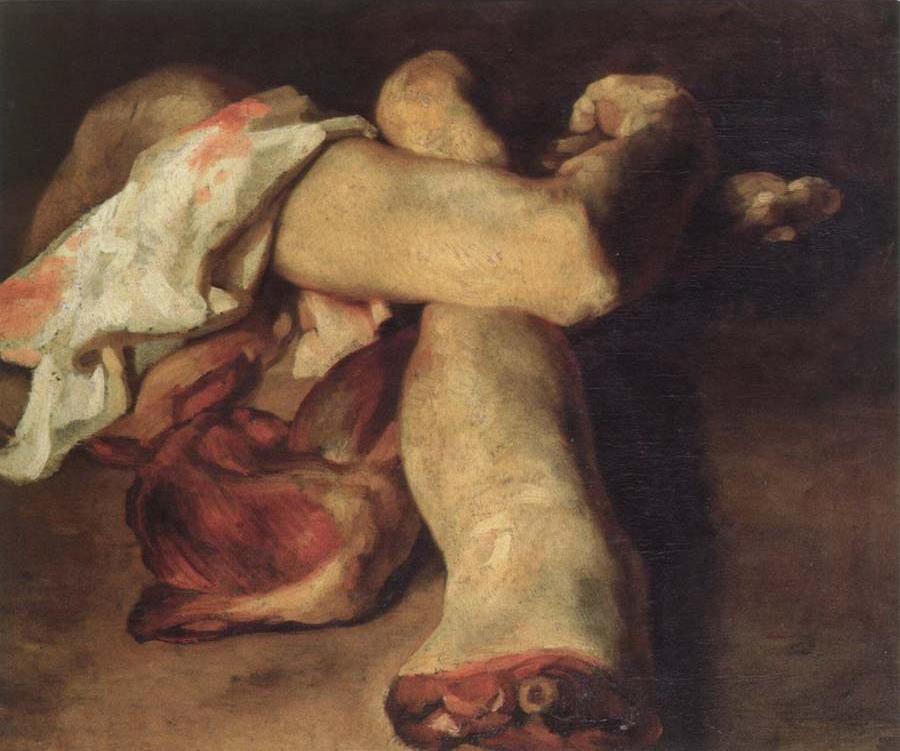 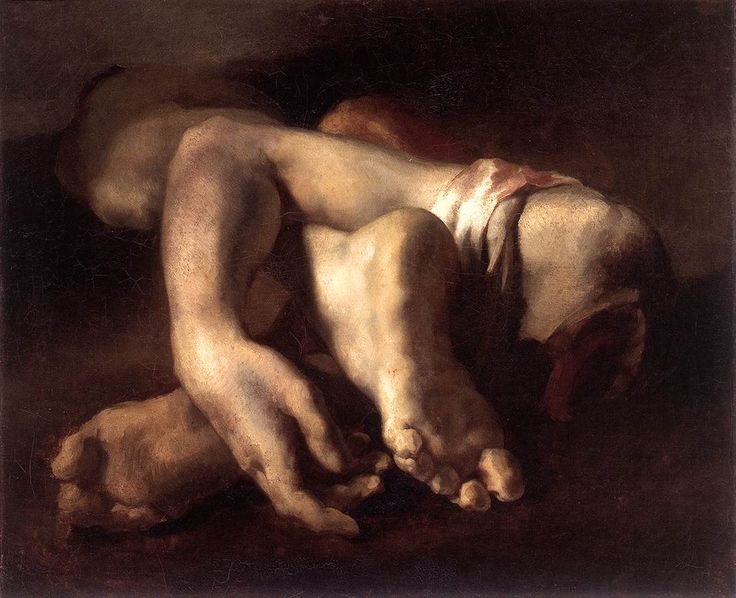 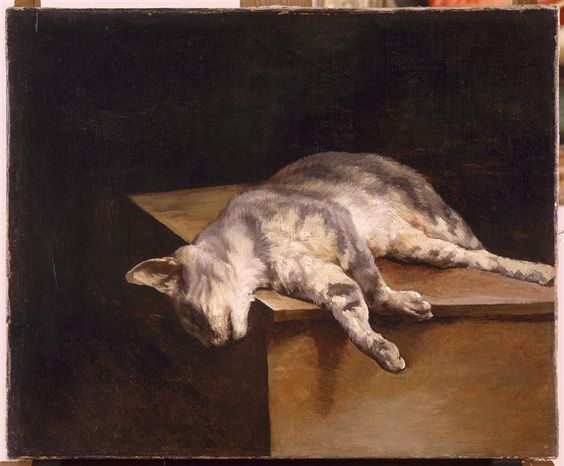 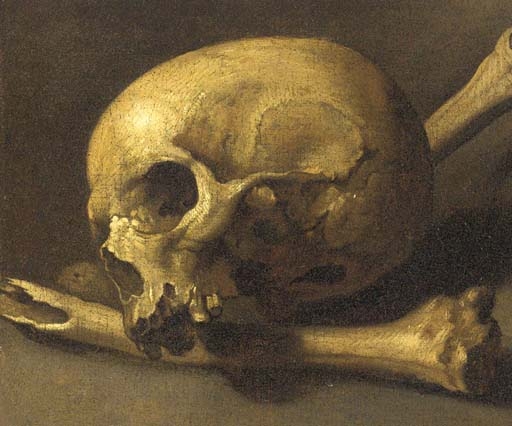 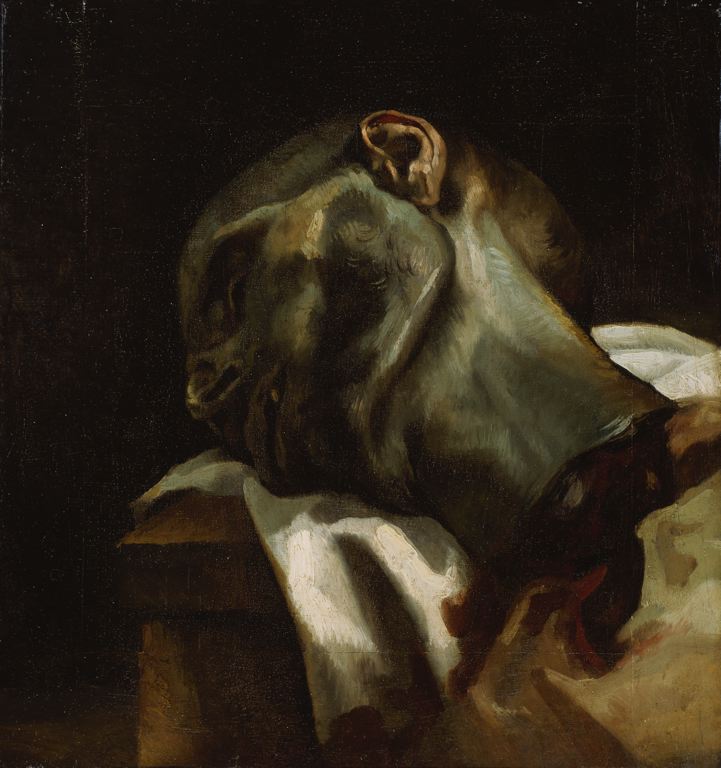 Géricault’s last efforts were directed toward preliminary studies for several epic compositions, including the Opening of the Doors of the Spanish Inquisition and the African Slave Trade. The preparatory drawings suggest works of great ambition, but Géricault’s waning health intervened.

Weakened by riding accidents and chronic tubercular infection, Géricault died in Paris in 1824 at the age of 32, after a long period of suffering. His bronze figure reclines, brush in hand, on his tomb at Père Lachaise Cemetery in Paris, above a low-relief panel of The Raft of the Medusa.

Géricault’s The Raft of the Medusa (by Tree)