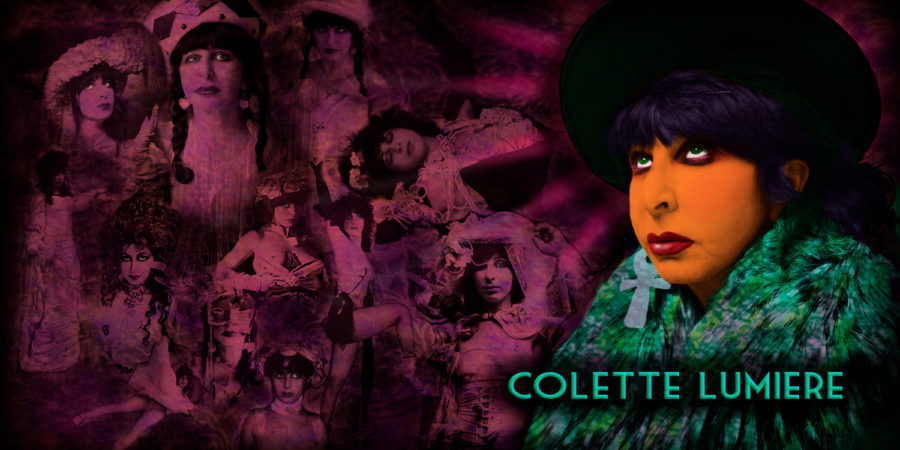 For a long time I’ve wanted to do a post about the beautiful Colette Lumiere. A few years ago, I ran across a video of her in the process of painting a large scale, segmented, mosaic-style work, in the middle of a street in New York, all the while exquisitely dressed in a white jumpsuit and white chunk-heel boots. I was immediately mesmerized by her and this work, and it was then that Colette was lifted to the realm of Undeniable Awesomeness in my eyes. A bit of Googling and I found out that Colette Justine (better known as Colette and from 2001 Colette Lumiere) is a prolific artist who deliciously blends elements of Dada and avant-garde with a fantasy-based Baroque sensibility, in virtually every aspect of art imaginable. She has been a pioneer in performance art, guerrilla street art, constructed photography, film and installation art, as well as expressing her distinctive vision through more traditional media and forms, such as drawing, painting, collage, and sculpture. I had wanted to do her bio for the Artist Birthday Series that I have been working on for the past few years, but was never actually able to find a date of birth for her. But now, after seeing her luscious, gorgeous, timeless works of of dreamy, flowing fabric with my very own eyes during a recent visit to New York, I decided to put the birthday aside and just celebrate her brilliance for its own sake. (UPDATE: I have since discovered her birthday is October 8)

Colette was a French national born in Tunis, Tunisia, and grew up in Nice, France. She later moved to the United States and became a naturalized citizen. In 1970 she had herself photographed as “Liberty Leading The People,” after the famous painting by Delacroix. Later in 1972, she presented the photograph as part of a large performance/installation piece in a gallery in New York, where she converted the space into an other-worldly dreamscape. The gallery had been transformed by yards of silk drapery and indirect/hidden lighting, with the floor painted lavender and inscribed with her own personal “code,” as well as audio installation and the centerpiece, Colette herself posing as if a living photograph, as Liberté.

In 1973, the Stefonatty Gallery in New York offered her a solo show, where she exhibited sixteen over-life-sized, 3D mixed media paintings entitled “The Sandwomen,” all of which resembled Colette. She also converted the gallery office into an alternate Colette-style reality, with white scrunched silk, hidden lights and no furniture. In this environment she posed as the “Sleeping Gypsy,” after the painting by Henri Rouseau, entitling the performance as “The Transformation Of The Sleeping Gypsy Without The Lion.” Other performances from the early ’70’s that employed her now trademark abundance of fabric and passion were “Persophone’s Bedroom,” for the Norton Museum in Miami, Florida, and “If It Takes Forever I Will Wait For You,” for the Idea Warehouse, part of the Clocktower Gallery, in New York.

Long before Banksy, and even prior to Jean Michel Basquiat and Keith Haring, Colette was anonymously creating numerous large street paintings, until her identity was discovered by Willoughby Sharp of Avalanche magazine, and soon after she gained notoriety. Al Hansen, the well known Fluxus artist, interviewed and filmed her while she was creating one of her works, entitled “The Ear” in Soho, her favorite canvas. While filming, her ritual/performance was cut short as police arrived and the artists tried to escape. Colette managed to hide herself in a nearby building. Arnold Newman, the famed photographer who discovered her whereabouts and had come to shoot her for Verizon Magazine, was held instead for questioning. Her street paintings were ephemeral, never meant to last, but word of mouth spread quickly around the neighborhood’s of New York when one of her works would magically appeared seemingly overnight. She created other well known street works in other locations, such as “The Lips” (which covered the entire intersection of on West 57th Street), and “It Was Here” (which covered a very long section of Federal highway in front of the Norton Museum). “It Was Here,” is considered her  most grandiose street painting performance was executed on Friday the 13th, 1974 during a solar eclipse. Colette painted Aristotelian quotes again on the pavement of the gardens across the street from the Norton, then crossing over the federal highway. When the police arrived at the end of her ritual, they discovered Colette sleeping on the steps of the museum, above the entrance of which featured a relief of a woman entitled “Inspiration.” They immediately recognized the artist, now sleeping dressed in a salmon night gown. She had received much press coverage for her environment and art works showcased at the same time in the museum.


Throughout the rest of the 1970’s (and really, still through to today), her unique, iconic mode of dress began to influence the fashion world as a whole. Her habit of wearing undergarments such as bloomers, corsets, garters, etc., as her everyday clothing, influenced at first the New York scene but quickly the world. A young Madonna in New York in the late 1970’s was one of the most famous of the time to have absorbed Colette’s style and sass into her own wardrobe and persona. More contemporary artists, such as Lady Gaga, also find the roots of their fashion in the style that Colette pioneered decades before.

This could not have been more clear when in 2012 one of the windows of Barney’s Department Store in NYC, entitled “Gaga’s Boudoir,” plagiarized Colette’s legendary environment (72-82). The windows were created with with Colette’s signature style, using undeniably Colette elements such as her distinctive covering of all furniture and walls, embedded mirrors, and even a Gaga replica lying on a sofa in a reclining pose, replacing Colette. The display prompted a gentle, elegant performance and street-art protest from Colette, in the hopes of elevating conversation in the art world to consider art versus commerce, individual versus corporation, and where the line is to be drawn between inspiration and plagiarism.

In spite of numerous articles published by those wishing to set the record straight, a few months after Colette’s protest, Gaga slept “a la Colette aka Justine” in an installation at the Guggenheim, rented for the evening to promote her perfume, surprisingly without any reference to Colette’s oeuvre and trademark. When asked after Gaga’s sleeping performance, Colette’s final response was simply and honestly, “I’m still the original.”

From the late 1970’s until today, Colette has done nothing but live every breath of her life as art…creating art, breathing art, being art. She has done innumerable performance pieces around the globe, created new characters to tell her ethereal stories at international exhibitions like the Paris Biennale, as well as working with great museums like the MOMA in New York. In 1978, the Italian designer Fiorucci asked her to do one of her famous sleeping performances in a window in New York, bringing her Victorian punk style to the emerging New Wave and Goth movements of the 1980’s, leading to today’s Steampunk fashion. She was the original Steampunk Goddess.

She adopted and breathed life into several personas from the late 1970’s until today. She was Justine of the Colette is Dead Co., a recording star, fashion designer, inventor & conceptualizer of products. She was Mata Hari, of her living work Mata Hari And The Stolen Potatoes in Berlin, and while living in Munich she became Countess Reichenbach who continued in Colette’s alternative reality of sensuous silk, lace, performance, and art. Her most memorable series created during her Bavarian Adventure was her “DIAL C FOR SCANDAL SERIES ,” a conceptual business which provided art scandals to be commissioned.

Colette returned to New York City as her permanent home in the early nineties. Her new persona, The House Of Olympia, was inspired by the 18th cent and lasted a decade. After the attacks on New York on September 11, 2001, Colette changed her name one more time, this time using the French word for light, “lumiere,” as her last name, and Colette Lumiere to this day continues to bring light to the world through her personal, intimate vision of life and all it means to be alive, to be creative, and to live every day with passion and truth to oneself.

In recent years Colette has participated in dozens of international exhibitions, lived as an Artist In Residence in Berlin, starred in the film “Pirates Of Venice,” as well as having been the subject of innumerable documentaries, articles, and exhibitions, and remaining gorgeously noble and stylish as always.

Trailer to film documentary on Colette “A Pirate in Venice,” 2012

Today, Colette/Laboratoire Lumiere spends most of her time between New York and Berlin, and continues to exhibit all over the world. In 2016 she was the recipient of The Guggenheim Fellowship, and was invited to participate in #40 @Ps1 MOMA with a monumental installation exhibition/performance “There’s A Mermaid In The Attic.” The exhibition I was fortunate enough to see when I was in New York, entitled “Love In The Attic….Mermaid In The Closet,” ran from September 12 to October 15, 2017, at the Mitchell Algus Gallery in New York, and won ArtForum’s Best Art 2017.

In January of 2018, Colette’s recent works, “Lumiere’s Adventures In ZuluLand” (which had been conceived during her residency in Zululand where she had been invited by Thanda Art Projects), were exhibited and auctioned at Stockholm’s Auktionverk, at a special gala raising money for the A Star For Life Art Project & Foundation. All works auctioned were immediately sold!

In late May, 2018, she opened two solo shows in Berlin, “The Berlin Diaries ” at the Seven Star Gallery, Berlin Mitte, an on site installation that contained works made in Berlin, and “Berlin Night Drawings” at the Susanne Albrecht Gallery in Charlottenburg, considered the equivalent of of Uptown& Downtown in NYC . In between those exhibitions, she performed one of her “Lumiere Apparitions, From Liberte to Lumiere,” for the June Creations festival in Paris, at the Palais Des Beaux Arts.

For more information, please check out her website ColetteTheArtist.com, or her Artnet page. I can also recommend her YouTube channel, which contains some of her music videos, interviews, and other delights…such as “Did You Eat?” (below) which makes me squeal with delight every time I see it.

by Terri Maxfield Lipp
July 2017
made with love