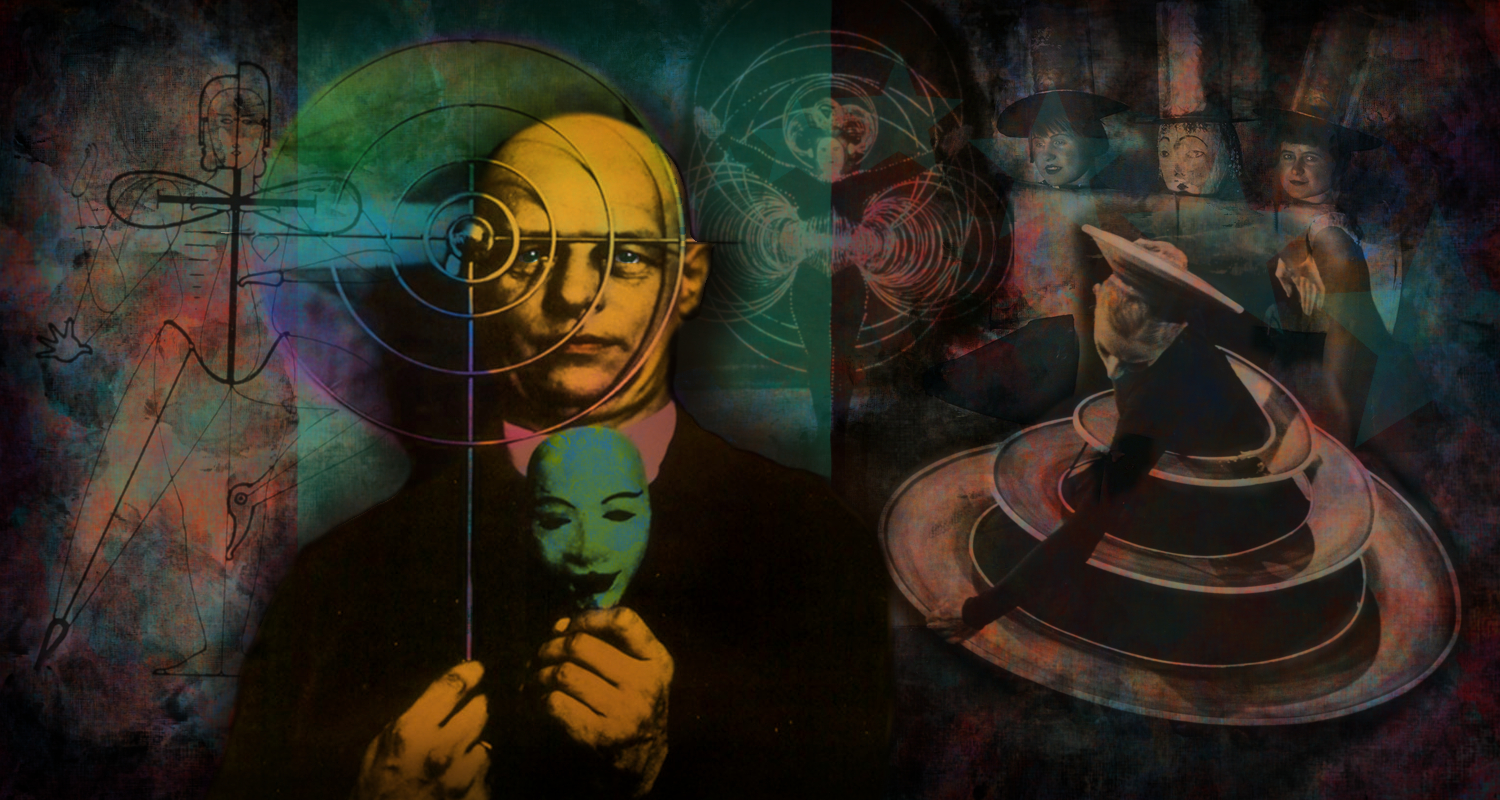 Oskar Schlemmer (4 September 1888 – 13 April 1943) was a German painter, sculptor, designer and choreographer associated with the Bauhaus school. In 1923 he was hired as Master of Form at the Bauhaus theatre workshop, after working some time at the workshop of sculpture. His most famous work is “Triadisches Ballett,” in which the actors are transfigured from the normal to geometrical shapes. Also in Slat Dance and Treppenwitz, the performers’ costumes make them into living sculpture, as if part of the scenery. 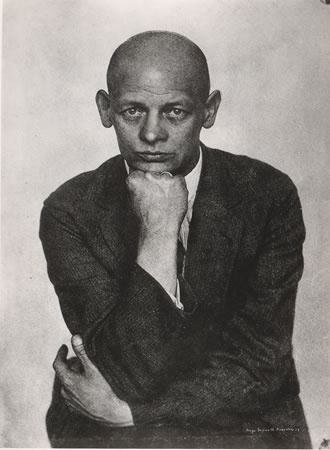 Born in 1888 in Stuttgart, Oskar Schlemmer was the youngest of six children. His parents, Carl Leonhard Schlemmer and Mina Neuhaus, both died around 1900 and the young Oskar lived with his sister and learned at an early age to provide for himself. By 1903 he was completely independent and supporting himself as an apprentice in an inlay workshop, moving on to another apprenticeship in marquetry from 1905 to 1909. He studied at the Kunstgewerbeschule as well as the Akademie der Bildenden Künste in Stuttgart under the tutelage of landscape painters Christian Landenberger and Friedrich von Keller.

In 1910 Schlemmer moved to Berlin where he painted some of his first important works before returning to Stuttgart in 1912 as Adolf Hölzel’s master pupil. In 1914 Schlemmer was enlisted to fight on the Western Front in World War I until he was wounded and moved to a position with the military cartography unit in Colmar, where he resided until returning to work under Hölzel in 1918.

In 1919 Schlemmer turned to sculpture and had an exhibition of his work at the Gallery Der Sturm in Berlin.

After his marriage to Helena (Tut) Tutein in 1920, Schlemmer was invited to Weimar by Walter Gropius to run the mural-painting and sculpture departments at the Bauhaus School before heading up the theater workshop in 1923. His complex ideas were influential, making him one of the most important teachers working at the school at that time.

Schlemmer became known internationally with the première of his Triadisches Ballett in Stuttgart in 1922. It has been called by some, “The weirdest thing you’ll ever see.” 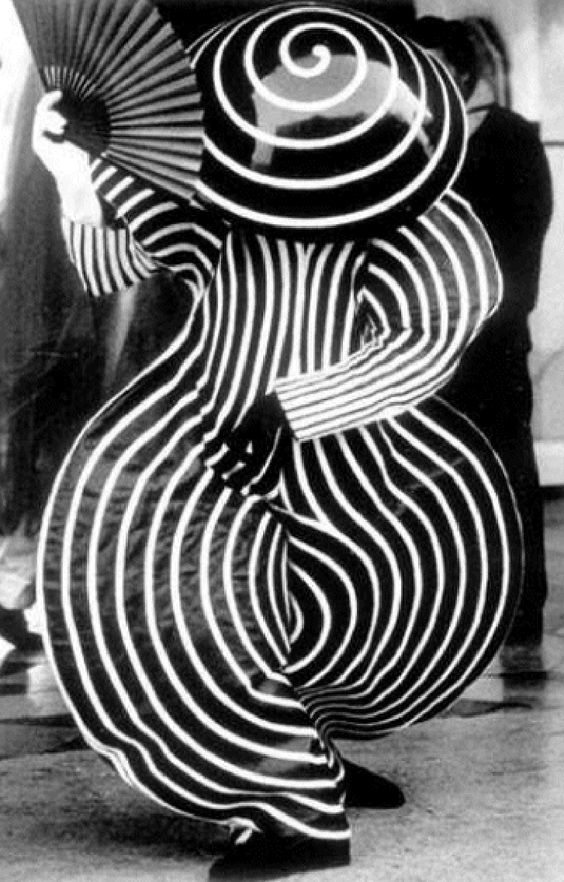 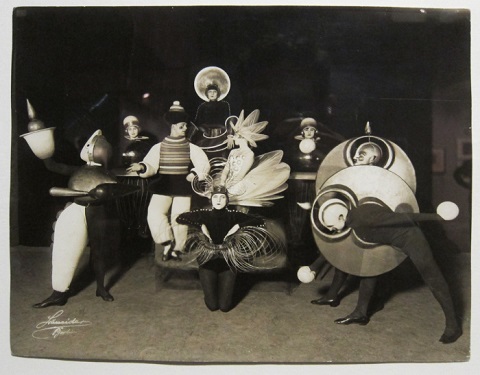 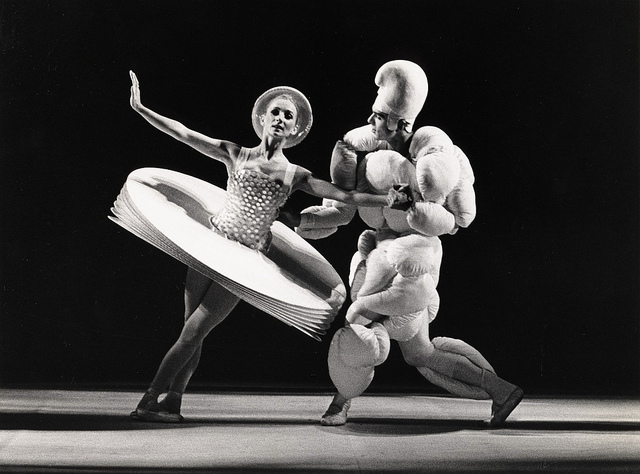 His work for the Bauhaus and his preoccupation with the theatre are an important factor in his work, which deals mainly with the problematic of the figure in space. People, typically stylized faceless female figures, continued to be the predominant subject in his painting. In the human form he saw a measure that could provide a foothold in the disunity of his time. 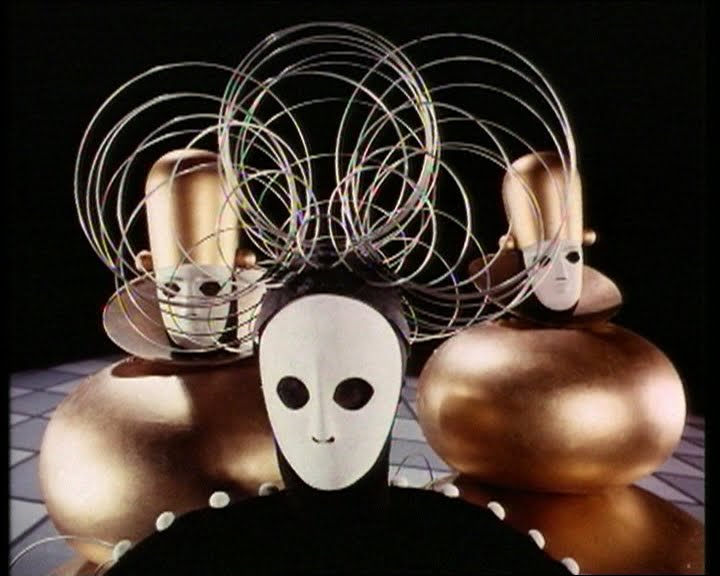 After using Cubism as a springboard for his structural studies, Schlemmer’s work became intrigued with the possibilities of figures and their relationship to the space around them, for example Egocentric Space Lines (1924).

Schlemmer’s characteristic forms can be seen in his sculptures as well as his paintings. Yet he also turned his attention to stage design, first getting involved with this in 1929, executing settings for the opera Nightingale and the ballet Renard by Igor Stravinsky. 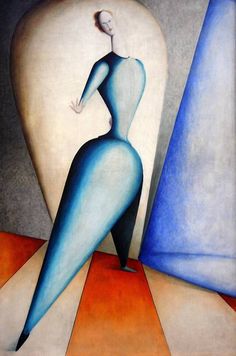 From 1928 to 1930, Schlemmer worked on nine murals for a room in the Folkwang Museum in Essen.

However, due to the heightened political atmosphere in Germany at the end of the 1920s, and in particular with the appointment of the radical communist architect Hannes Meyer as Gropius’s successor, in 1929 Schlemmer resigned his position and moved to take up a job at the Art Academy in Breslau, where he painted his most celebrated work, the Bauhaustreppe, (Bauhaus Stairway), 1932 ( now at the Museum of Modern Art, New York – but not without controversy, which we will get to shortly).

He was obliged to leave the Breslau Academy when it was closed down in the wake of the financial crisis following the Wall Street Crash, and took up a professorship at Berlin’s Vereinigte Staatsschulen für freie und angewandete Kunst (United State School for Fine and Applied Art) in 1932, which he held until 1933 when he was forced to resign due to pressure from the Nazis.

The Schlemmers then moved to Eichberg near the Swiss border, and then to Sehringen before five of his pictures were displayed at the now infamous Nazi exhibtion,  Entartete Kunst (in English, Degenerate Art). This show destroyed the work, reputations, and souls of many German artists in the final years of the 1930’s.

During World War II Schlemmer worked at the laquer factory, the Institut für Malstoffe in Wuppertal, along with Willi Baumeister and Georg Muche, run by the philanthropist Kurt Herbert. The factory offered Schlemmer the opportunity to paint without the fear of persecution, albeit in relative hiding.

The last decade of Schlemmer’s life was marred by the Nazi dictatorship and defamation of his life’s work. Max Bill, in his obituary of Schlemmer, wrote that it was “as if a curtain of silence” had descended over him during this time. During the summer of 1942, Schlemmer suffered a heart attack, many attribute to the stress he was put under by the pressures he had to endure due to the environment of the Nazi government.  He painted a series of eighteen small, mystical paintings which he executed while at home in recovery. Entitled Fensterbilder (Window Pictures), these works were painted while looking out the window of his house and observing neighbors engaged in their domestic tasks.

Though he was seen by numerous doctors and tried many different kinds of treatments, he never recovered, and finally passed away in the hospital at Baden-Baden on April 13, 1943, at the age of 54. 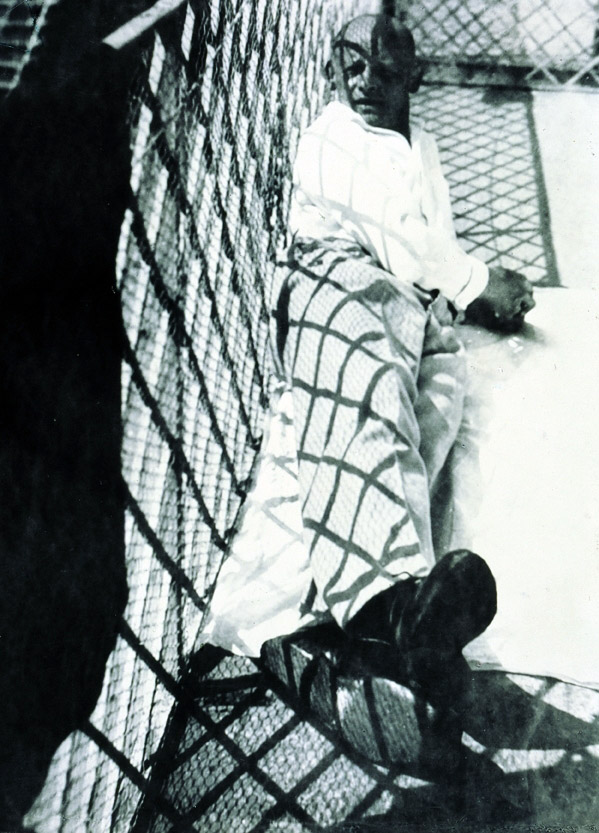 In 2000, the artist’s daughter Ute Jaina Schlemmer, who asserted that she technically owns the painting  Bauhaustreppe (Bauhaus Stairway), obtained a court order to hold it for further investigation while it was on temporary loan from the Museum of Modern Art in New York to the Neue Nationalgalerie in Berlin. Before the injunction was served on the Neue Nationalgalerie, Bauhaus Stairway had unfortunately already been packed and shipped to New York, where it still resides today.

The history of the controversy started in 1933, the year Hitler came to power. The architect Philip Johnson, then a curator at the Modern in New York, cabled Schlemmer at the behest of Alfred Barr, the Modern’s director, offering to buy the painting. Schlemmer, labeled a ”degenerate artist” by the Nazis and forced to quit his post teaching art and take a factory job, was pleased by the opportunity and sent Bauhaus Staircase to him. Johnson bought it, lent it to the museum and then donated it in 1943, the year Oskar Schlemmer died.

On that, both sides seem to agree.

But in a telephone interview from Italy where he lives, C. Raman Schlemmer said that his 77-year-old mother, Ute, the painter’s daughter, went to court to determine ownership because it appears that Schlemmer, if he was paid at all, did not get what he expected to receive. ”The cable offered a price of 12,000 Reichsmarks,” Mr. Schlemmer said, ”but after he sent the painting to New York he got another cable saying there was a misunderstanding about price and offering 1,200 Reichsmarks. My grandfather begged for something more, but we never found a reply. We have no proof that Mr. Johnson paid anything.”

The museum’s point of view was quite different, and perhaps as a result of their ability to hire numerous, very expensive lawyers, the Schlemmer’s case appears to have been dropped. Sadly, it is just one example in many where large-scale museums falter in what could have worked as a very positive public relations opportunity. 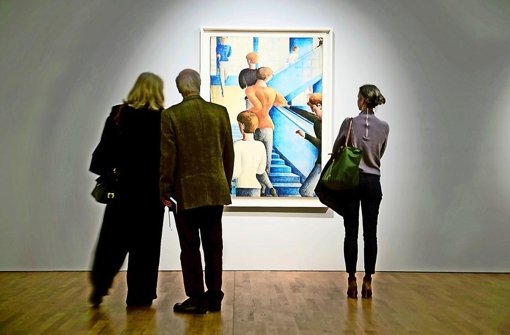