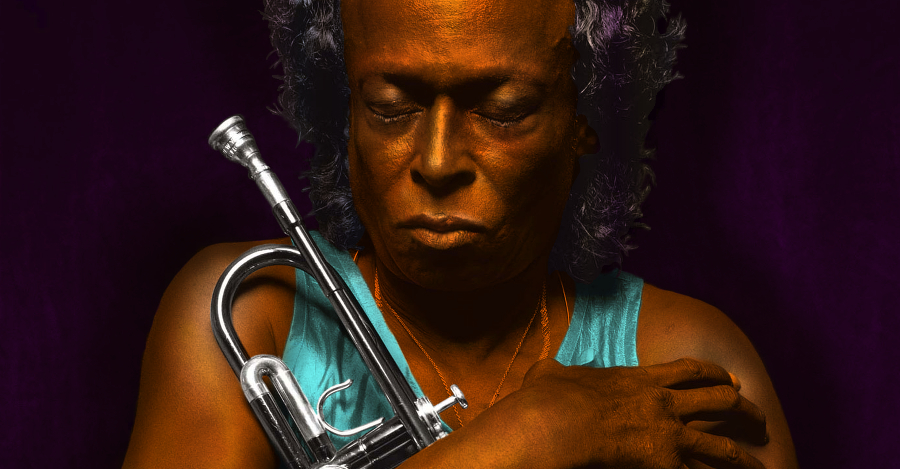 Miles Davis was born Miles Dewey Davis III on May 26, 1926, in Alton, Illinois, the son of a prosperous dental surgeon and a music teacher. Davis grew up in a supportive middle-class household, where he was introduced by his father to the trumpet at age 13.

Davis quickly developed a talent for playing the trumpet under the private tutelage of Elwood Buchanan, a friend of his father who directed a music school. Buchanan emphasized playing the trumpet without vibrato, which was contrary to the common style used by trumpeters such as Louis Armstrong, and which would come to influence and help develop the Miles Davis style.

Davis played professionally while in high school. When he was 17 years old, Davis was invited by Dizzy Gillespie and Charlie Parker to join them onstage when the famed musicians realized they needed a trumpet player to replace a sick bandmate. Soon after, in 1944, Davis left Illinois for New York, where he would soon enroll at the Juilliard School (known at the time as the Institute of Musical Art). 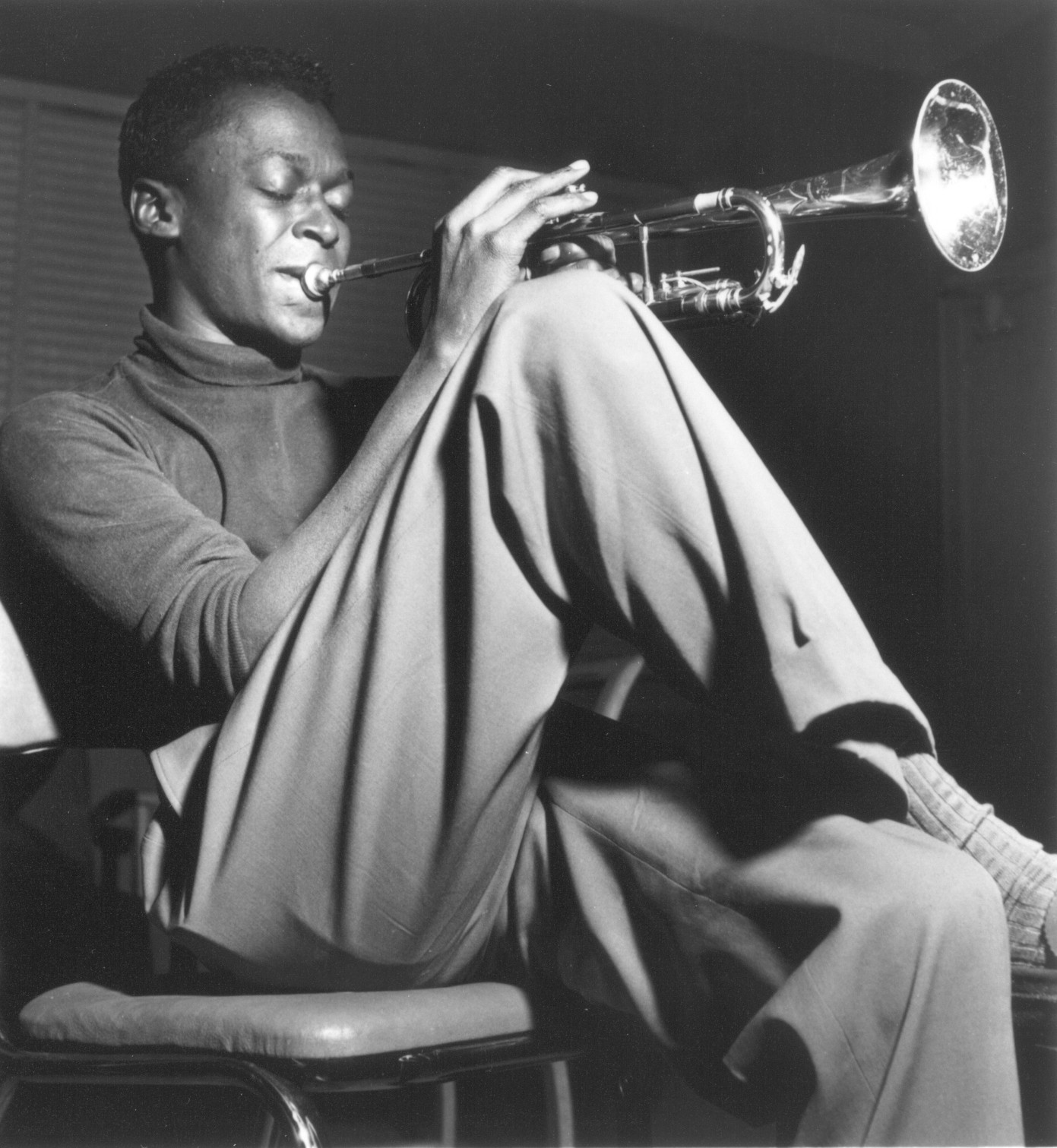 While taking courses at Juilliard, Davis sought out Charlie Parker and, after Parker joined him, began to play at Harlem nightclubs. During the gigs, he met several musicians whom he would eventually play with and form the basis for bebop, a fast, improvisational style of jazz instrumental that defined the modern jazz era. 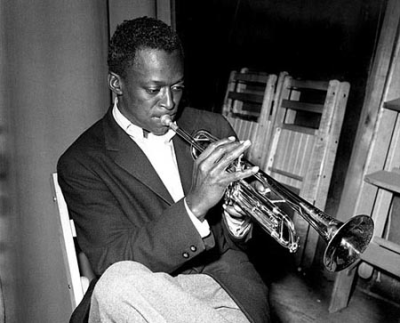 In 1945, Miles Davis elected, with his father’s permission, to drop out of Juilliard and become a full-time jazz musician. A member of the Charlie Parker Quintet at the time, Davis made his first recording as a bandleader in 1946 with the Miles Davis Sextet. Between 1945 and 1948, Davis and Parker recorded continuously. It was during this period that Davis worked on developing the improvisational style that defined his trumpet playing. 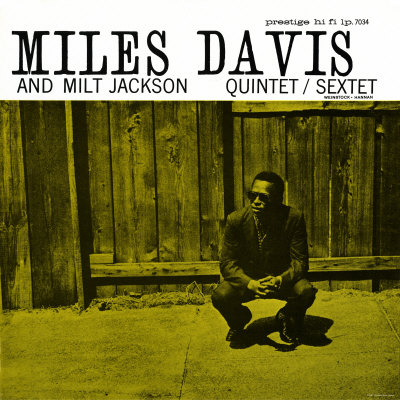 In 1949, Davis formed a nine-piece band with uncommon additions, such as the French horn, trombone and tuba. He released a series of singles that would later be considered a significant contribution to modern jazz. They were later released as part of the album Birth of the Cool.

In the early 1950s, Davis became addicted to heroin. While he was still able to record, it was a difficult period for the musician and his performances were haphazard. Davis overcame his addiction in 1954, around the same time that his performance of “‘Round Midnight” at the Newport Jazz Festival earned him a recording contract with Columbia Records. There, he also created a permanent band, comprised of John Coltrane, Paul Chambers and Red Garland.

Davis recorded several albums with his sextet during the 1950s, including Porgy and Bess and Kind of Blue, his final album of the decade, released in 1959. Now considered one of the best jazz albums ever recorded, Kind of Blue is credited as the largest-selling jazz album of all time, selling more than 2 million copies.

Davis continued to be be successful throughout the 1960s. His band transformed over time, largely due to new band members and changes in style. The various members of his band went on to become some of the most influential musicians of the jazz fusion era. These included Wayne Shorter and Joe Zawinul (Weather Report), Chick Corea (Return to Forever), and John McLaughlin and Billy Cobham (Mahavishnu Orchestra).

The development of jazz fusion was influenced by artists such as Jimi Hendrix and Sly and the Family Stone, reflecting the “fusion” of jazz and rock. The album Bitches Brew, recorded a few weeks after the 1969 Woodstock Music Festival, set the stage for the jazz fusion movement to follow. Bitches Brew soon became a best-selling album. As a result, Davis was featured on the cover of Rolling Stone magazine—becoming the first jazz artist to be so recognized. For his traditional fans, this change of style was not welcome, but it exemplifies Davis’s ability to experiment and push the limits of his own music style.

In 1975, Davis was once again drawn into drug abuse, becoming addicted to alcohol and cocaine, and subsequently taking a five-year hiatus from his career. In 1979, he met Cicely Tyson, an American actress, who helped him overcome his cocaine addiction. He and Tyson married in 1981.

From 1979 to 1981, Davis worked on recordings that culminated in the release of the album The Man with the Horn, which registered steady sales but wasn’t well-received by critics. Davis spent the 1980s continuing to experiment with different styles. He interpreted songs made popular by Michael Jackson (“Human Nature”) and Cyndi Lauper (“Time After Time”) on his album You’re Under Arrest, released in 1985. 1985 also saw Davis guest-star on the TV show Miami Vice as pimp and minor criminal Ivory Jones in the episode titled “Junk Love” (first aired November 8, 1985)

It was around this time that Davis developed a feud with fellow trumpeter Wynton Marsalis. Marsalis publicly criticized Davis’s work in jazz fusion, claiming that it wasn’t “true” jazz. Subsequently, when Marsalis attempted to join Davis onstage without invitation at the Vancouver International Jazz Festival in 1986, Davis requested that he leave the stage, using strong language. To this day, the quarrel between the musicians has been credited with making the International Jazz Festival famous.

Davis reinvented himself yet again in 1986 with the release of Tutu. Incorporating synthesizers, drum loops and samples, the album was well-received and garnered Davis another Grammy Award. This was followed by the release of Aura, an album that Davis had created in 1985 as a tribute to the Miles Davis “aura,” but wasn’t released until 1989. Davis won yet another Grammy for this project.

Honoring his body of work, in 1990, Miles Davis received a Lifetime Achievement Grammy Award. In 1991, he played with Quincy Jones at the Montreux Jazz Festival. The two performed a retrospective of Davis’s early work, some of which he had not played in public for more than 20 years. His last recordings, both released posthumously, were the hip hop-influenced studio album Doo-Bop and Miles & Quincy Live at Montreux, a collaboration with Quincy Jones for the 1991 Montreux Jazz Festival.

During the last years of Miles Davis’ life, there were rumors that he had AIDS, something that he and his manager Peter Shukat vehemently denied. According to Quincy Troupe by that time Davis was taking azidothymidine (AZT), a type of antiretroviral drug used for the treatment of HIV/AIDS. Regardless of the truth, or lack thereof, in those rumors, on September 28, 1991, Davis succumbed to pneumonia and respiratory failure, dying at the age of 65. Fittingly, his recording with Quincy Jones would bring Miles Davis his final Grammy, awarded posthumously in 1993. The honor was just another testament to the musician’s profound and lasting influence on jazz.

He is buried in Woodlawn Cemetery in the Bronx, New York City. 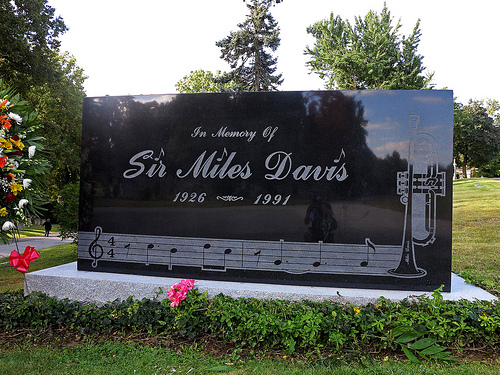