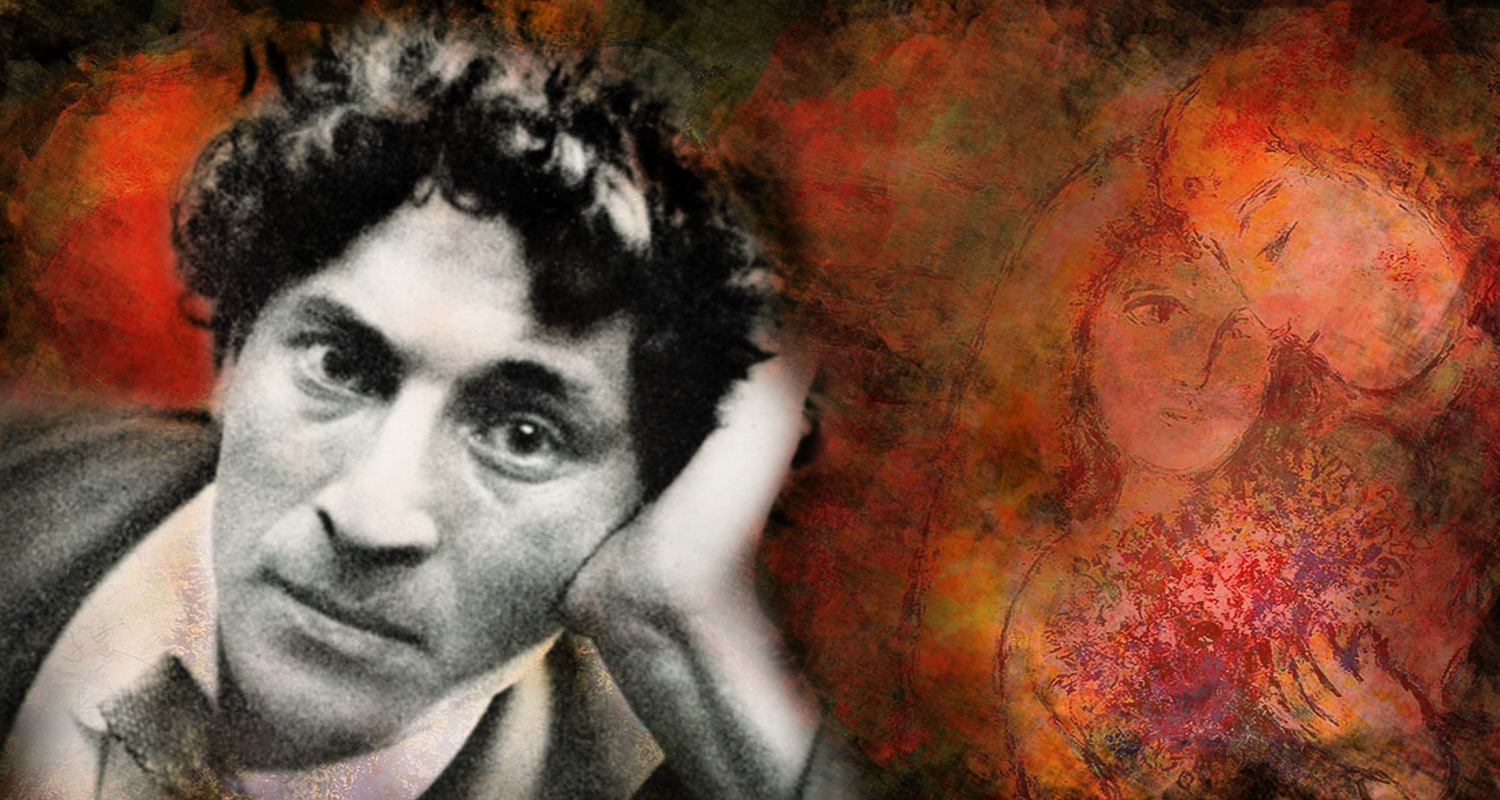 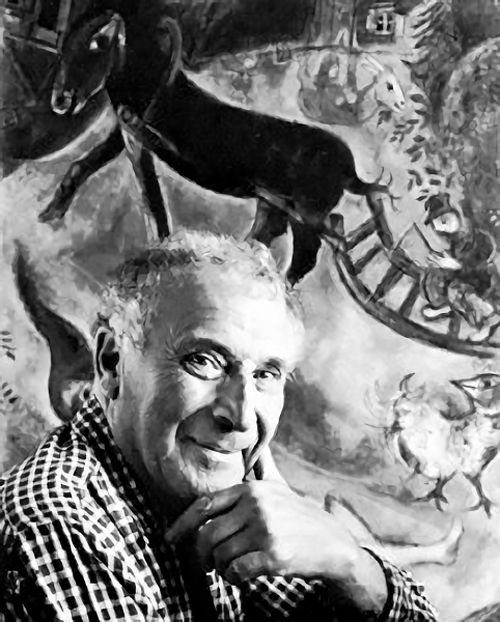 Marc Chagall was born in a small Hassidic community on the outskirts of Vitebsk, Belarus, on July 7, 1887. His father was a fishmonger, and his mother ran a small sundries shop in the village. As a child, Chagall attended the Jewish elementary school, where he studied Hebrew and the Bible, before later attending the Russian public school. He began to learn the fundamentals of drawing during this time, but perhaps more importantly, he absorbed the world around him, storing away the imagery and themes that would feature largely in most of his later work.

At age 19 Chagall enrolled at a private, all-Jewish art school and began his formal education in painting, studying briefly with portrait artist Yehuda Pen. However, he left the school after several months, moving to St. Petersburg in 1907 to study at the Imperial Society for the Protection of Fine Arts. The following year, he enrolled at the Svanseva School, studying with set designer Léon Bakst, whose work had been featured in Sergei Diaghilev’s Ballets Russes. This early experience would prove important to Chagall’s later career as well.

Despite this formal instruction, and the widespread popularity of realism in Russia at the time, Chagall was already establishing his own personal style, which featured a more dreamlike unreality and the people, places and imagery that were close to his heart. Some examples from this period are his Window Vitebsk (1908) and My Fianceé with Black Gloves (1909), which pictured Bella Rosenfeld, to whom he had recently become engaged.

Despite his romance with Bella, in 1911 an allowance from Russian parliament member and art patron Maxim Binaver enabled Chagall to move to Paris, France. After settling briefly in the Montparnasse neighborhood, Chagall moved further afield to an artist colony known as La Ruche (“The Beehive”), where he began to work side by side with abstract painters such as Amedeo Modigliani and Fernand Léger as well as the avant-garde poet Guillaume Apollinaire. At their urging, and under the influence of the wildly popular fauvism and cubism, Chagall lightened his palette and pushed his style ever further from reality. I and the Village (1911) and Homage to Apollinaire (1912) are among his early Parisian works, widely considered to be his most successful and representative period.

Though his work stood stylistically apart from his cubist contemporaries, from 1912 to 1914 Chagall exhibited several paintings at the annual Salon des Indépendants exhibition, where works by the likes of Juan Gris, Marcel Duchamp and Robert Delaunay were causing a stir in the Paris art world.

Chagall’s popularity began to spread beyond La Ruche, and in May 1914 he traveled to Berlin to help organize his first solo exhibition, at Der Sturm Gallery. Chagall remained in the city until the highly acclaimed show opened that June. He then returned to Vitebsk, unaware of the fateful events to come.

In August 1914 the outbreak of World War I precluded Chagall’s plans to return to Paris. The conflict did little to stem the flow of his creative output, however, instead merely giving him direct access to the childhood scenes so essential to his work, as seen in paintings such as Jew in Green (1914) and Over Vitebsk (1914).

His paintings from this period also occasionally featured images of the war’s impact on the region, as with Wounded Soldier (1914) and Marching (1915). But despite the hardships of life during wartime, this would also prove to be a joyful period for Chagall. In July 1915 he married Bella, and she gave birth to a daughter, Ida, the following year. Their appearance in works such as Birthday (1915), Bella and Ida by the Window (1917) and several of his “Lovers” paintings give a glimpse of the island of domestic bliss that was Chagall’s amidst the chaos.

To avoid military service and stay with his new family, Chagall took a position as a clerk in the Ministry of War Economy in St. Petersburg. While there he began work on his autobiography and also immersed himself in the local art scene, befriending novelist Boris Pasternak, among others. He also exhibited his work in the city and soon gained considerable recognition. That notoriety would prove important in the aftermath of the 1917 Russian Revolution when he was appointed as the Commissar of Fine Arts in Vitebsk. In his new post, Chagall undertook various projects in the region, including the 1919 founding of the Academy of the Arts. Despite these endeavors, differences among his colleagues eventually disillusioned Chagall. In 1920 he relinquished his position and moved his family to Moscow, the post-revolution capital of Russia.

In Moscow, Chagall was soon commissioned to create sets and costumes for various productions at the Moscow State Yiddish Theater, where he would paint a series of murals titled Introduction to the Jewish Theater as well. In 1921, Chagall also found work as a teacher at a school for war orphans. By 1922, however, Chagall found that his art had fallen out of favor, and seeking new horizons he left Russia for good.

After a brief stay in Berlin, where he unsuccessfully sought to recover the work exhibited at Der Sturm before the war, Chagall moved his family to Paris in September 1923. Shortly after their arrival, he was commissioned by art dealer and publisher Ambroise Vollard to produce a series of etchings for a new edition of Nikolai Gogol’s 1842 novel Dead Souls. Two years later Chagall began work on an illustrated edition of Jean de la Fontaine’s Fables, and in 1930 he created etchings for an illustrated edition of the Old Testament, for which he traveled to Palestine to conduct research. 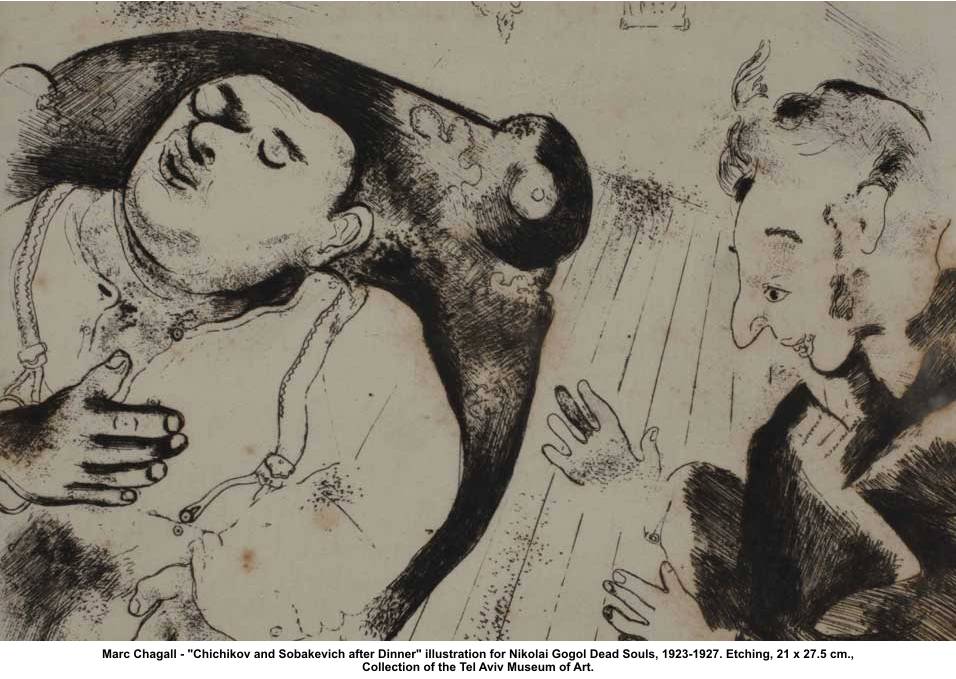 Chagall’s work during this period brought him new success as an artist and enabled him to travel throughout Europe in the 1930s. He also published his autobiography, My Life (1931), and in 1933 received a retrospective at the Kunsthalle in Basel, Switzerland. 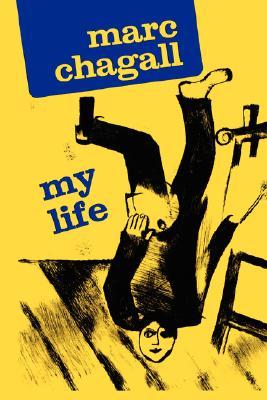 But at the same time that Chagall’s popularity was spreading, so, too, was the threat of Fascism and Nazism. Singled out during the cultural “cleansing” undertaken by the Nazis in Germany, Chagall’s work was ordered removed from museums throughout the country. Several pieces were subsequently burned, and others were featured in a 1937 exhibition of “degenerate art” held in Munich. Chagall’s angst regarding these troubling events and the persecution of Jews in general can be seen in his 1938 painting White Crucifixion.

With the eruption of World War II, Chagall and his family moved to the Loire region before moving farther south to Marseilles following the invasion of France. They found a more certain refuge when, in 1941, Chagall’s name was added by the director of the Museum of Modern Art (MOMA) in New York City to a list of artists and intellectuals deemed most at risk from the Nazis’ anti-Jewish campaign. Chagall and his family would be among the more than 2,000 who received visas and escaped this way. 

Arriving in New York City in June 1941, Chagall discovered that he was already a well-known artist there and, despite a language barrier, soon became a part of the exiled European artist community. The following year he was commissioned by choreographer Léonide Massine to design sets and costumes for the ballet Aleko, based on Alexander Pushkin’s “The Gypsies” and set to the music of Pyotr Ilyich Tchaikovsky.

But even as he settled into the safety of his temporary home, Chagall’s thoughts were frequently consumed by the fate befalling the Jews of Europe and the destruction of Russia, as paintings such as The Yellow Crucifixion (1943) and The Juggler (1943) indicate. A more personal blow struck Chagall in September 1944, when his beloved Bella died of a viral infection, leaving the artist incapacitated with grief. His sadness at the loss of his wife would haunt Chagall for years to come, as represented most poignantly in his 1945 paintings Around Her and The Wedding Candles.

Working through his pain, in 1945 Chagall began the set design and costumes for a production of Igor Stravinsky’s ballet The Firebird, which premiered in 1949, ran until 1965 and has been staged numerous times since. He also became involved with a young English artist named Virginia McNeil, and in 1946 she gave birth to their son, David. Around this time Chagall was also the subject of retrospective exhibitions at MOMA and the Art Institute of Chicago.

After seven years in exile, in 1948 Chagall returned to France with Virginia and David as well as Virginia’s daughter, Jean, from a previous marriage. Their arrival coincided with the publication of Chagall’s illustrated edition of Dead Souls, which had been interrupted by the onset of the war. The edition of Fables featuring his work was published in 1952, and after Chagall completed the etchings he had begun in 1930, his illustrated bible was published in 1956. 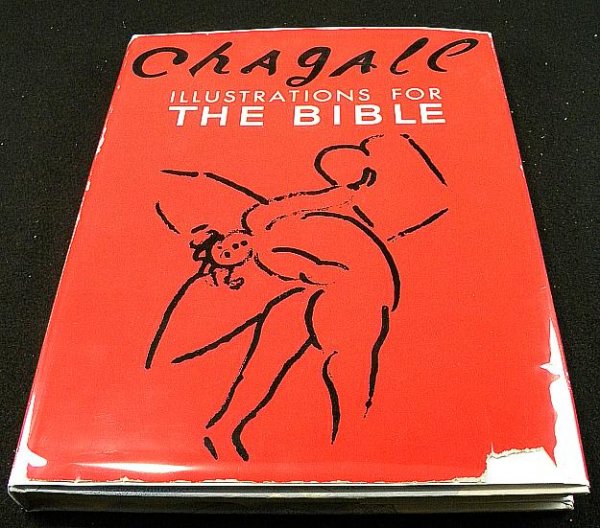 In 1950, Chagall and his family moved south to Saint-Paul-de-Vence, on the French Riviera. Virginia left him the next year, but in 1952 Chagall met Valentina “Vava” Brodsky and married her shortly thereafter. Valentina, who became Chagall’s no-nonsense manager, is featured in several of his later portraits.

Settling into life as an established painter, Chagall began to branch out, working in sculpture and ceramics as well as mastering the art of stained glass windows. Much of his important later work exists in the form of large-scale commissions around the world. Among the highlights from this period are his stained glass windows for the synagogue at the Hadassah Hebrew University Medical Center in Jerusalem (completed 1961), the Saint-Étienne Cathedral in Metz (completed 1968), the U.N. building in New York City (completed 1964) and the All Saint’s Church in Mainz, Germany (completed 1978); the ceiling of the Paris Opéra (completed 1964); and murals for the New York Metropolitan Opera (completed 1964), for whom he also designed the sets and costumes for a 1967 production of Wolfgang Amadeus Mozart’s The Magic Flute.

In 1977 Chagall received the Grand Medal of the Legion of Honor, France’s highest accolade. That same year, he became one of only a handful of artists in history to receive a retrospective exhibition at the Louvre.

He died on March 28, 1985, in Saint-Paul-de-Vence at age 97, leaving behind a vast collection of work along with a rich legacy as an iconic Jewish artist and pioneer of modernism. He was interred at the cemetery at Saint-Paul de Vence. 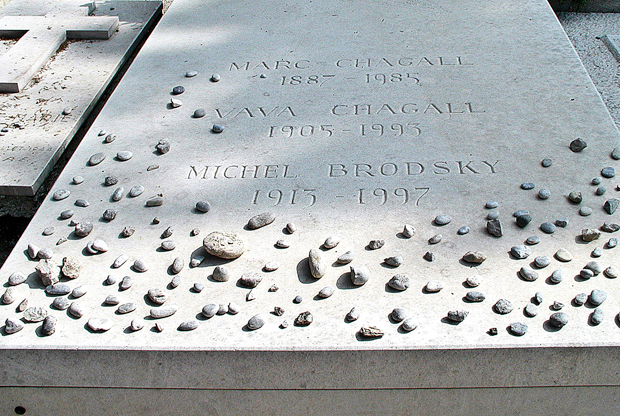