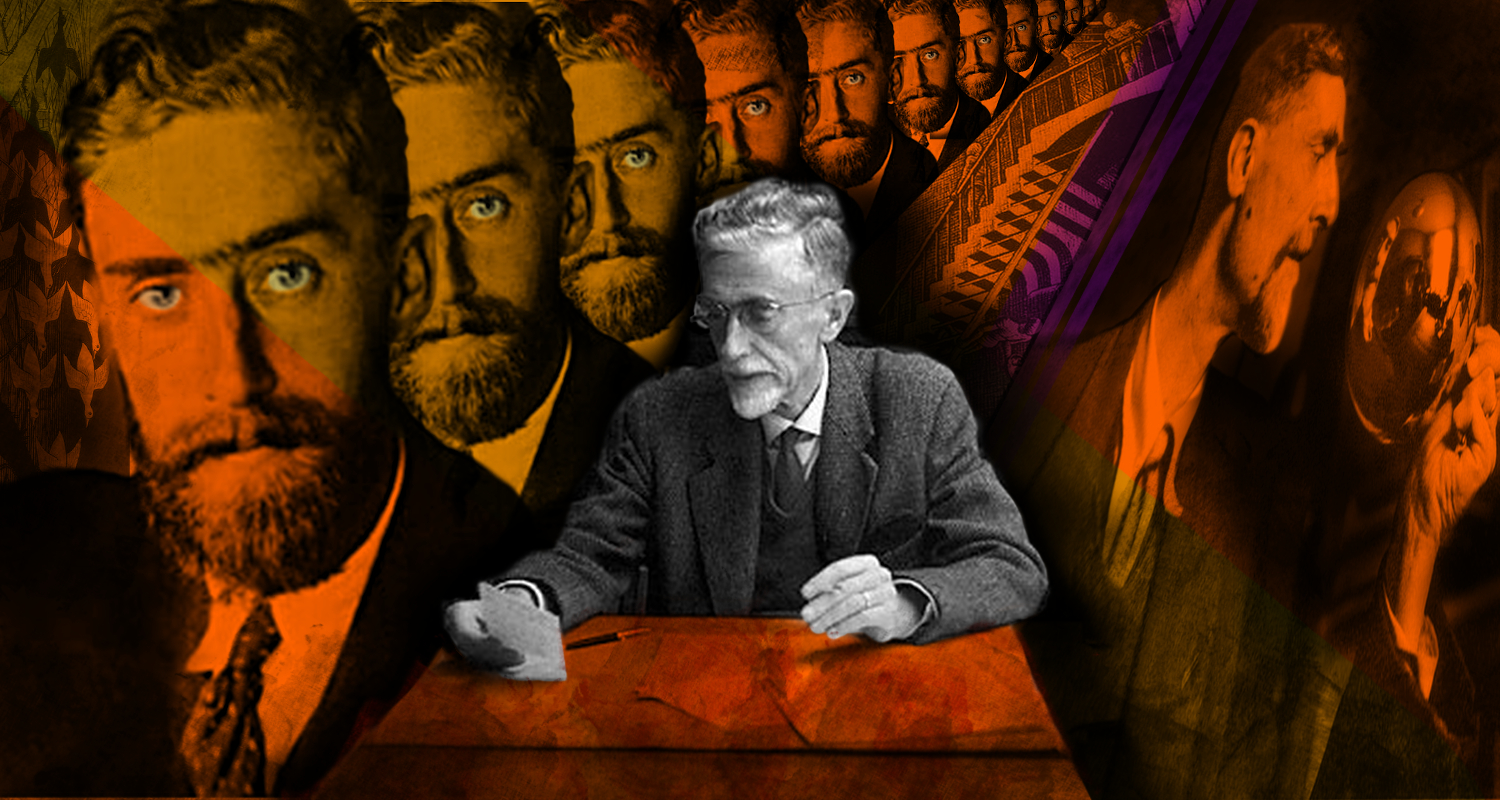 M.C. Escher was a 20th century Dutch illustrator whose innovative works explored echoing patterns, perception, space and transformation. He developed a print and engraving style that distinctively played with orientation and space. Influenced by Moorish designs in Spain, works like his famous “Day and Night” featured interlocking forms and transformation on a surreal canvas. 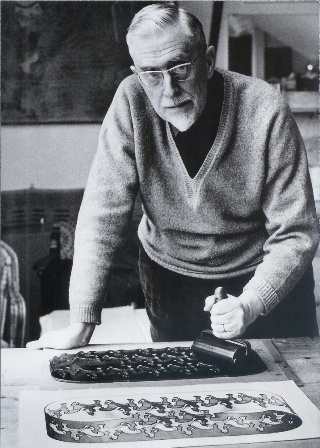 Maurits Cornelis Escher was born on June 17, 1898, in Leeuwarden, Netherlands, to Sarah and George Escher. The youngest of five brothers, he had an ability to visualize distinct spatial patterns from childhood, and, though not faring well in much of his earlier studies, he attended Haarlem’s School for Architectural and Decorative Arts.

There, he decided to take up graphic arts under the recommendation of his mentor, Samuel Jessurun de Mesquita. His earlier work included nudes and innovative portraiture captured in woodcuts, linoleum cuts and lithographs, such as the interconnected “Eight Heads” (1922).

As a young man, he traveled to the Mediterranean in the early 1920s and was profoundly influenced by the wonders of the Moor-designed Alhambra Palace in Granada, Spain. He met Jetta Umiker in 1923; they married the following year, going on to have three children.

Establishing a home in Rome with his family, he worked on engravings and prints that captured natural landscapes and architecture, startlingly playing with perspective, orientation and shadow. He also created more human-oriented work, including a 1925 rendering of his wife and several self-portraits, such as 1935’s “Hand With Reflecting Sphere.”

With the rise of fascism in Italy, Maurits and Jetta relocated to Switzerland in 1935, though they soon took a maritime journey to Spain, returning to Alhambra Palace and visiting La Mezquita (“Mosque”) of Cordoba as well. The artist was inspired by the structures’ complex designs, and further focused his work on tessellation and repeating patterns, often featuring overlapping, interlocked images morphing into something else, as seen in his “Metamorphosis” and “Development” series.

The family had moved to Belgium in 1937, but with the invasion of Nazi forces, left for Holland in 1941. Escher continued to create eye-opening dreamscape work such as “Up and Down” (1947), “Drawing Hands” (1948), “Gravity” (1952), “Relativity” (1953), “Print Gallery” (1956) and “Ascending and Descending” (1960). In addition to eventually becoming a lauded international artist with mounted exhibitions, he was embraced by mathematicians and scientists, as much of his heavily researched, precise output embodied or explored concepts around geometry, logic, space and infinity.

In 1964, he journeyed to Canada to visit one of his sons. He fell ill almost immediately upon arrival, and was rushed to the hospital where it was discovered he had cancer. He underwent emergency surgery while there, and as soon as he could travel again, he and his wife returned to Holland. His mortality staring him in the face, he created “The Eye Of Death,” that same year.

Upon returning home, he immersed himself in work. His health was failing, but he continued drawing and printing woodcuts. Shortly before his illness began to cripple Escher’s ability to create, he rendered a beautiful piece entitled “Snakes.” The creation of this piece was captured on film and was included in a short, rather beatnik-esque documentary of his Escher and his work. 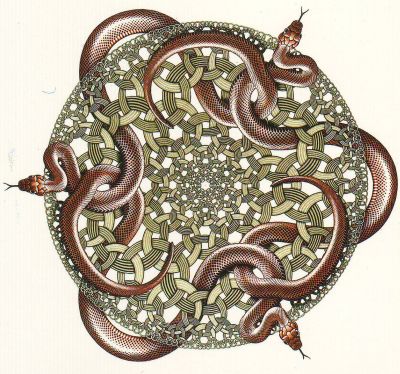 In 1970, after another round of surgery, he was moved to a new apartment in the Rosa Spier House in Laren, the Netherlands, a nursing home where many Dutch artists spent their final years. His new rooms included a studio, but his health was too poor to do much work. 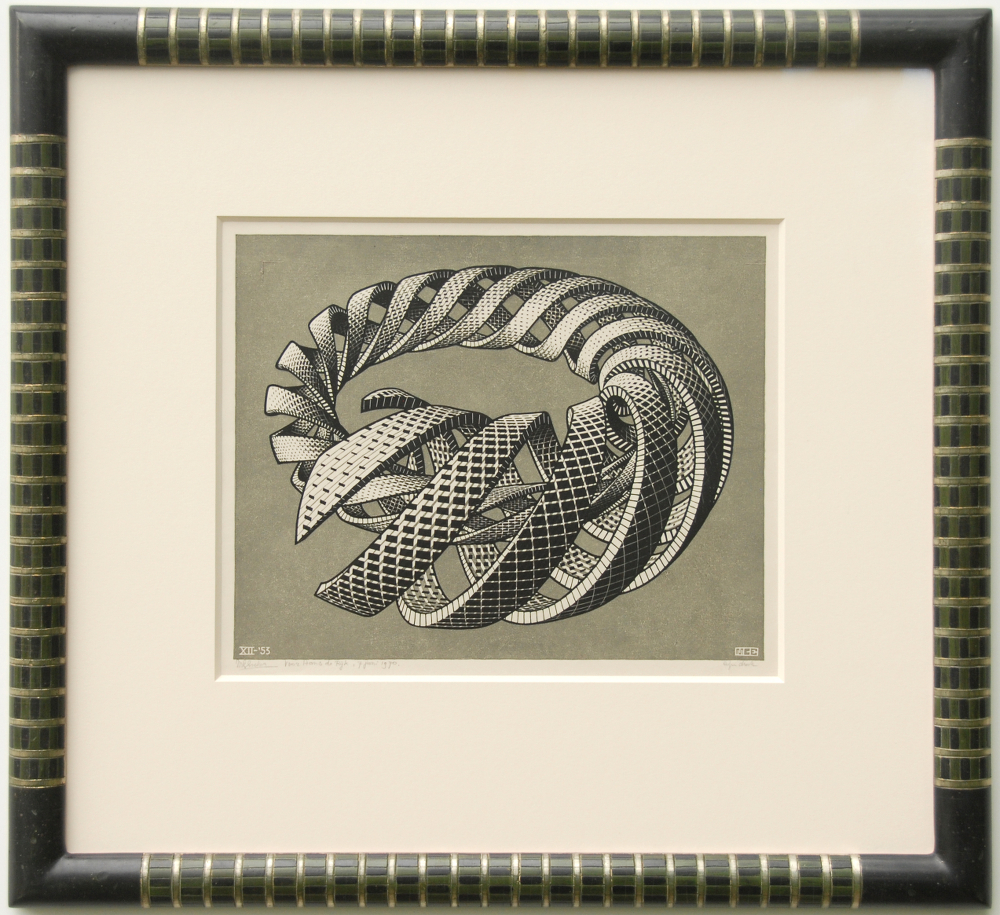 Though he was unable to do much artwork, he continued to correspond with various friends all over the world in his last years. A comprehensive book about his life and work was published in Dutch at this time, and other books were in preparation. He lived long enough to see the first book, The World of M.C. Escher, translated into English and become very successful. 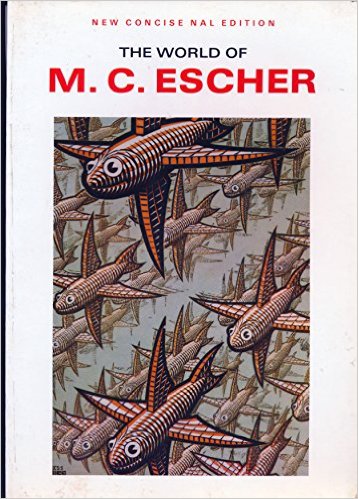 During the month of March, 1972, his condition deteriorated rapidly. His family gathered around him, taking turns sitting by his hospital bed. On March 27, 1972, he died, at the age of 73, leaving a legacy of more than 2,000 pieces. He is buried at Baarn Algemene Begraafplaats, Baarn Municipality, Utrecht, Netherlands. His simple, elegant grave marker is a testament to his visionary, optical style.

In 1985, in honor of the brilliant artist, scientists and mathematicians joined together and renamed  the asteroid 4444 after him. 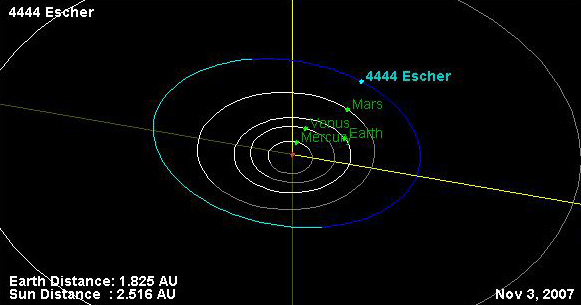