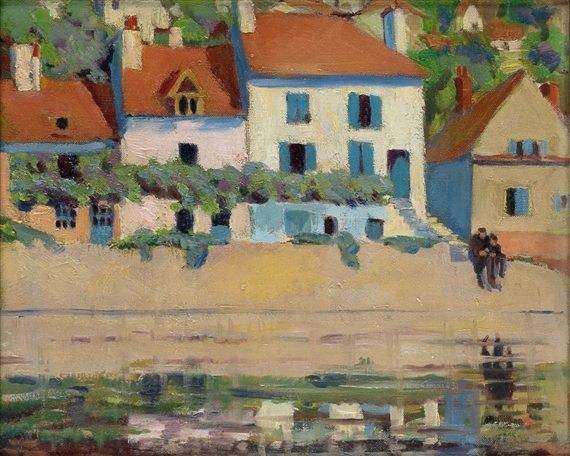 Laura Wheeler Waring (May 16, 1887 – February 3, 1948) was an African-American artist and educator, best known for her paintings of prominent African Americans which she made during the Harlem Renaissance. She taught art for more than 30 years at Cheyney University in Pennsylvania.

Laura Wheeler was born May 16, 1887 in Hartford, Connecticut, the fourth child of six born to Mary (Freeman) and Reverend Robert Foster Wheeler. Her mother was a daughter of Amos Noë Freeman, a Presbyterian minister, and Christiana Williams Freeman, who had been prominent in anti-slavery activities, including the Underground Railroad in Portland, Maine and Brooklyn, New York. Laura graduated from Hartford Public High School in 1906 and studied at the Pennsylvania Academy of the Fine Arts in Philadelphia, graduating in 1914.

In 1906 Waring began teaching part-time in Philadelphia at Cheyney Training School for Teachers (later renamed Cheyney State Teachers College and now known as Cheyney University.) She taught art and music at Cheyney until 1914 when she traveled abroad to Europe. Her occupation at Cheyney was time consuming, as it was a boarding school and she was often needed to work evenings and Sundays. This left her without much time to practice art. 1906-1914 were slow years for her artistic career as a result of this. Waring worked long hours teaching art, sometimes spending summers teaching drawing at Harvard and Columbia for additional money.

After she returned from Europe, she continued to work at Cheyney and did so for over thirty years. In her later years at Cheyney, she was the director of the art programs.

In 1914 Laura Wheeler-Waring was granted a trip to Europe by the Pennsylvania Academy of Fine Arts’ William E. Cresson Memorial Scholarship. She studied at the Académie de la Grande Chaumière in Paris, France and traveled throughout Great Britain. While living in Paris, Wheeler-Waring frequented the Jardin du Luxembourg. She painted Le Parc Du Luxembourg (1918), oil on canvas, based on a sketch she made during one of her recurrent visits. Wheeler-Waring also spent much time in the Louvre Museum studying Monet, Manet, Corot and Cézanne. “I thought again and again how little of the beauty of really great pictures is revealed in the reproductions which we see and how freely and with what ease the great masters paint.”

Wheeler-Waring planned on traveling more to Switzerland, Italy, Germany and the Netherlands, but her trip was cut short when war in Europe was declared in 1914. After a stay of three months, she was required to return to the United States. Waring’s trip at the time had very little effect on her career, but it has been remarked as a major influence on her and her work as an artist. Receiving the scholarship gave her the time to evolve as an artist and, as the award was highly regarded, she also gained much publicity.

After the end of the war, Waring returned to Paris in June 1924. Her second trip to Paris was regarded to be a turning point in her style as well as her career. Waring described this time as the most purely art-motivated period in her life, “This was my only period of uninterrupted life as an artist with an environment and associates that were a constant stimulus and inspiration.” 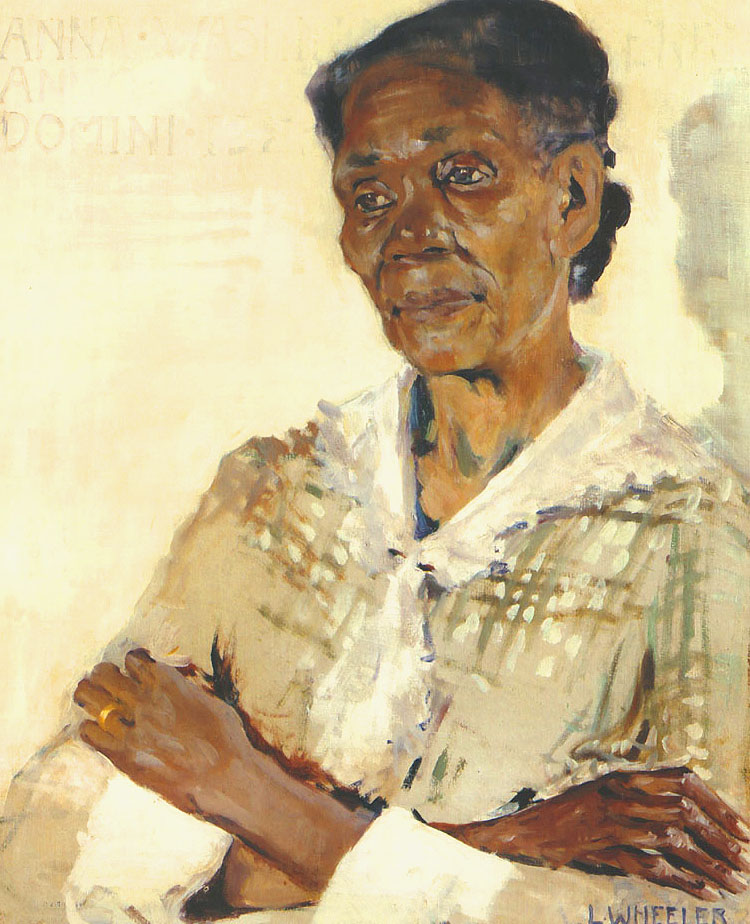 For approximately four months, Waring lived in France, absorbing French culture and lifestyle. She began to paint many portraits, and in October enrolled to study at the Académie de la Grande Chaumiére, where she studied painting. Instead of soft, pastel tones she painted a more vibrant and realistic method. Houses at Semur, France (1925), oil on canvas, has been noted by art historians the painting that marked Waring’s change in style. Her use of vivid color, light, and atmosphere in this work is characteristic of the style she established after this trip to Europe and which she continued throughout her career.

Besides a posthumous exhibition at Howard University in 1949, Waring’s paintings made in Paris are not believed to have been exhibited and their whereabouts are unknown. In addition to painting, Waring wrote and illustrated a short story with close friend and novelist, Jessie Redmon Fauset. Fauset accompanied Waring throughout her travels in France at this time.

Outside of painting, Wheeler—who was a member of the National Association for the Advancement of Colored People—created illustrations, usually pen-and-ink drawings, for the National Association for the Advancement of Colored People’s magazine, as well as writing the short story, “Dark Algiers and White,” for the NAACP magazine, The Crisis, and for its children’s publication, the Brownies’ Book, throughout the 1920s. Though she enjoyed working with African-American activists like W.E.B. Du Bois, her teaching commitments in Pennsylvania kept her from deeper participation in the Harlem Renaissance. 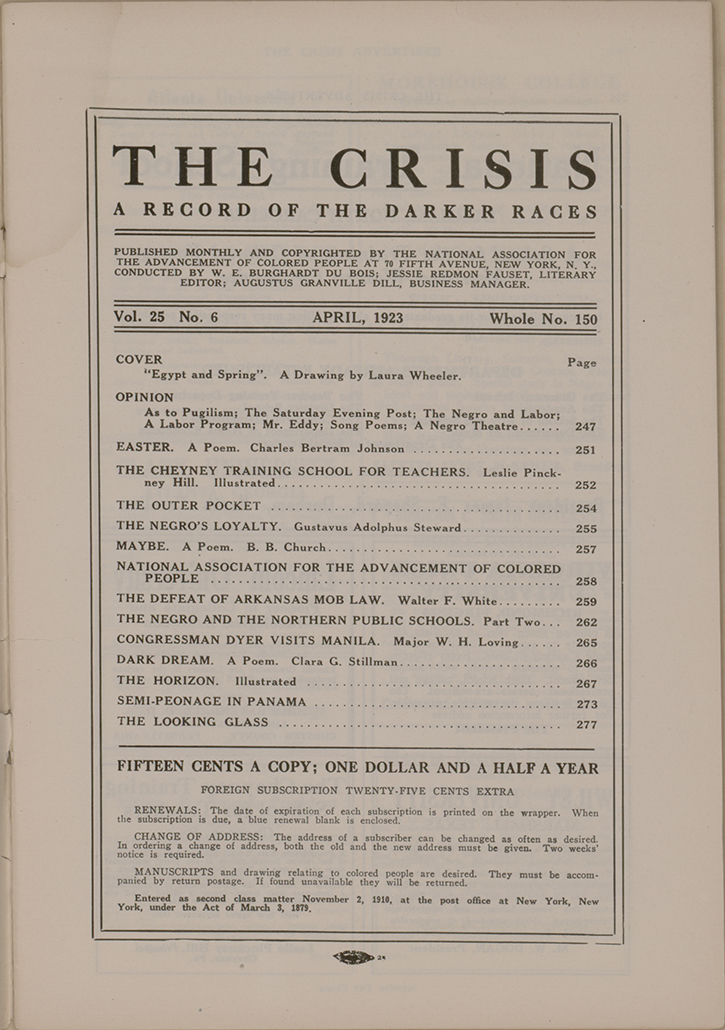 Laura Wheeler married Walter Waring on June 23, 1927. He was from Philadelphia and worked in the public school system as a teacher. When they first married, money was scarce, so they delayed their honeymoon for two years. In 1929, the newlyweds traveled to France, spending more than two months there.

Wheeler’s paintings included landscapes and still lifes, but she is best known for her work in portraiture, in which she captured both unknown and famous figures. In 1927, the Harmon Foundation—an organization created to acknowledge the achievements of African Americans in the United States—honored her with a gold medal for the portrait Anne Washington Derry (1926).

In the late 1920s, several of Waring’s paintings were part of the first exhibition of African-American art, organized by the Harmon Foundation. She was singled out by the foundation once more when eight of her portraits were shown in a 1944 exhibit entitled “Portraits of Outstanding American Citizens of Negro Origin.” The well-known figures she painted for this display included Marian Anderson, Jessie Fauset and James Weldon Johnson. Her work was soon displayed in American institutions, including the Corcoran Gallery in Washington, DC, the Brooklyn Museum, and the Philadelphia Museum of Art.

After a prolonged illness, Laura Wheeler-Waring passed away on February 3, 1948, in her Philadelphia home, and was laid to rest in Eden Cemetery in Collingdale, PA. 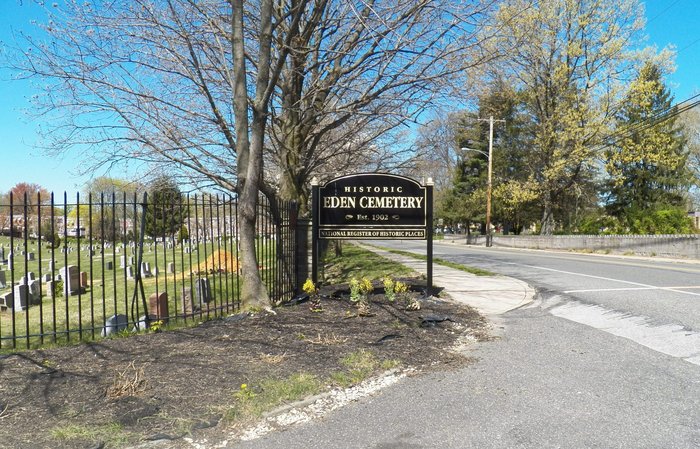 Her work, which often fought stereotypes and portrayed accomplished African Americans, was progressive step on the road toward civil rights. Today, many of the portraits that make up part of her artistic legacy are in the Washington DC’s National Portrait Gallery’s permanent collection.