Julia Margaret Cameron (née Pattle; 11 June 1815 Calcutta – 26 January 1879 Kalutara, Ceylon) was a British photographer. She became known for her portraits of celebrities of the time, and for photographs with Arthurian and other legendary or heroic themes. She is now considered one of the greatest portrait photographers of the 19th century.

Cameron’s photographic career was short, spanning eleven years of her life (1864–1875). She took up photography at the relatively late age of 48, when she was given a camera as a present. Her style was not widely appreciated in her own day: her choice to use a soft focus and to treat photography as an art as well as a science, by manipulating the wet collodion process, caused her works to be viewed as “slovenly”, “mistakes” and bad photography. She found more acceptance among pre-Raphaelite artists than among photographers. Her work has had an impact on modern photographers, especially her closely cropped portraits.

Julia Margaret Cameron was born Julia Margaret Pattle in Calcutta, India, to Adeline de l’Etang and James Pattle, a British official of the East India Company. She was from a family of celebrated beauties and was considered an ugly duckling among her sisters. As her great-niece Virginia Woolf wrote in the 1926 introduction to the Hogarth Press collection of Cameron’s photographs, “In the trio [of sisters] where…[one] was Beauty; and [one] Dash; Mrs. Cameron was undoubtedly Talent”.

Cameron was educated in France, but returned to India, and in 1838 married Charles Hay Cameron, a jurist and member of the Law Commission stationed in Calcutta, who was twenty years her senior. In 1848, Charles retired, and they moved to London, England. In 1860, Cameron visited the estate of poet Alfred Lord Tennyson on the Isle of Wight. She was taken with the location, and the Cameron family purchased a property on the island soon after. They called it Dimbola Lodge after the family’s Ceylon estate.

In 1863, when Cameron was 48 years old, her daughter gave her a camera as a present, thereby starting her career as a photographer. Within a year, she became a member of the Photographic Societies of London and Scotland. She remained a member of the Photographic Society, London, until her death. In her photography, Cameron strove to capture beauty. She wrote, “I longed to arrest all the beauty that came before me and at length the longing has been satisfied.”

The basic techniques of soft-focus “fancy portraits”, which she later developed, were taught to her by David Wilkie Wynfield. She later wrote that “to my feeling about his beautiful photography I owed all my attempts and indeed consequently all my success”.
Lord Tennyson, her neighbor on the Isle of Wight, often brought friends to see the photographer and her works. 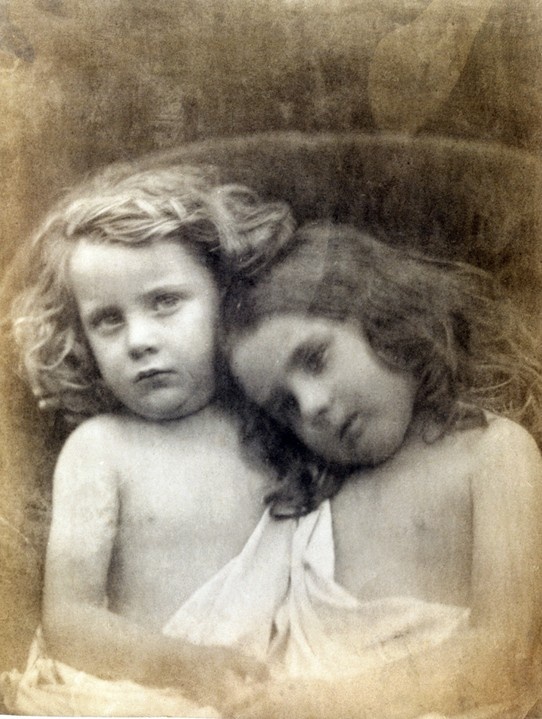 At the time, photography was a labour-intensive art that also was highly dependent upon crucial timing. Sometimes Cameron was obsessive about her new occupation, with subjects sitting for countless exposures in the blinding light as she laboriously coated, exposed, and processed each wet plate. The results were, in fact, unconventional in their intimacy and their particular visual habit of created blur through both long exposures, where the subject moved, and leaving the lens intentionally out of focus. 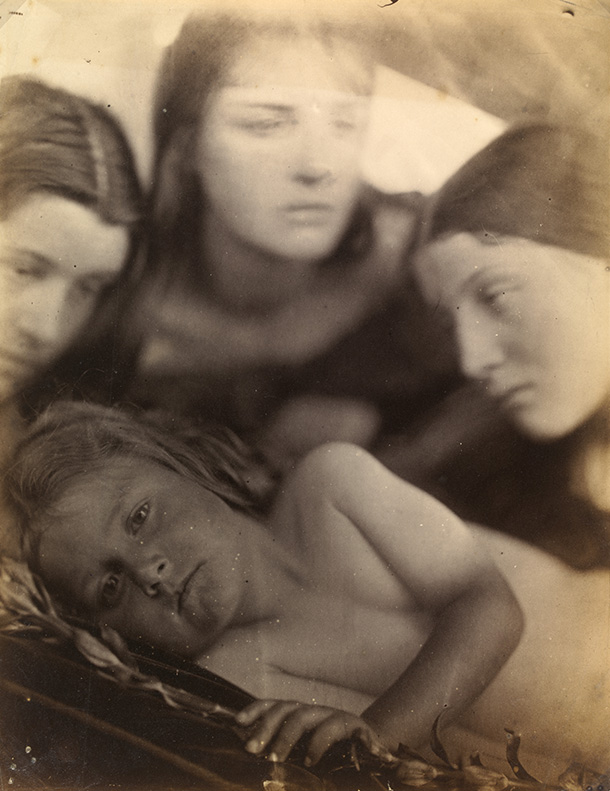 Other photographers strove for vastly different applications. This led some of her contemporaries to complain and even ridicule the work, but her friends and family were supportive, and she was one of the most prolific and advanced of amateurs in her time. Her enthusiasm for her craft meant that her children and others sometimes tired of her endless photographing, but it also left us with some of the best of records of her children and of the many notable figures of the time who visited her.

During her career, she registered each of her photographs with the copyright office and kept detailed records. Her shrewd business sense is one reason that so many of her works survive today. Another reason that many of Cameron’s portraits are significant is because they are often the only existing photograph of historical figures, becoming an invaluable resource. Many paintings and drawings exist, but, at the time, photography was still a new and challenging medium for someone outside a typical portrait studio.

The bulk of Cameron’s photographs fit into two categories—closely framed portraits and illustrative allegories based on religious and literary works. In the allegorical works in particular, her artistic influence was clearly Pre-Raphaelite, with far-away looks, limp poses, and soft lighting. 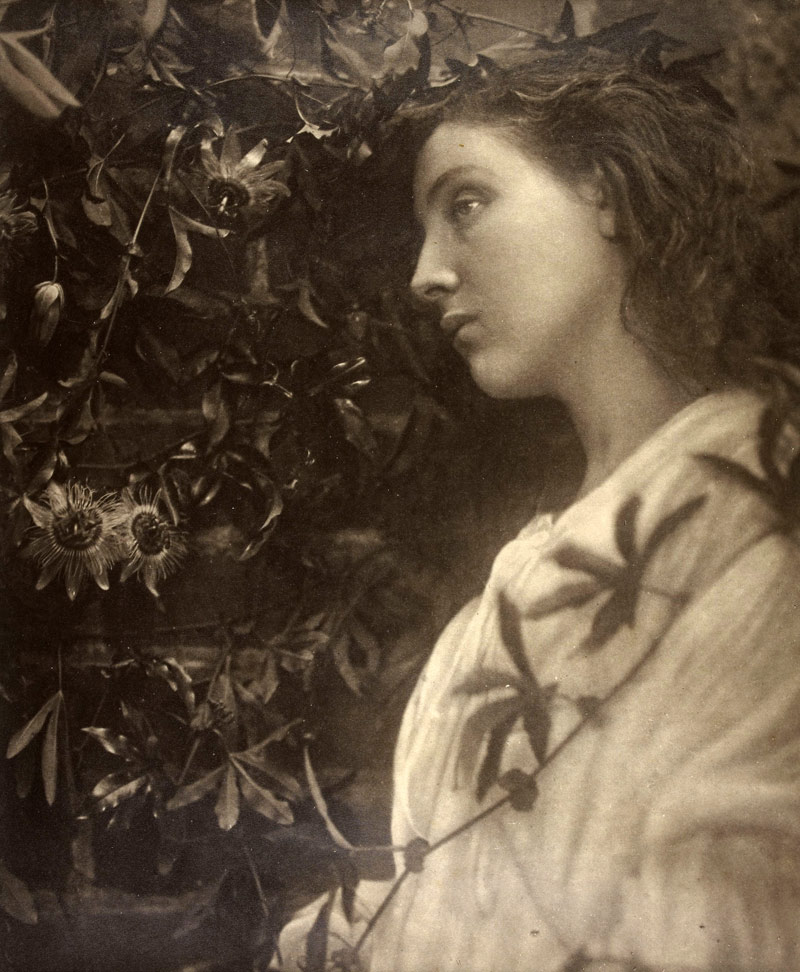 Cameron’s sister ran the artistic scene at Little Holland House, which gave her many famous subjects for her portraits. Some of her famous subjects include: Charles Darwin, Alfred Lord Tennyson, Robert Browning, John Everett Millais, William Michael Rossetti, Edward Burne-Jones, Ellen Terry, and George Frederic Watts. Most of these distinctive portraits are cropped closely around the subject’s face and are in soft focus. Often Cameron was a friend of these Victorian celebrities, and, knowing them well, tried to capture their personalities in her photographs.

Cameron’s posed photographic illustrations represent the other half of her work. In these illustrations, she frequently photographed historical scenes or characters drawn from literary works, which often took the quality of oil paintings. She made no attempt, however, to hide the backgrounds. Cameron’s friendship with Tennyson led to him asking her to photograph illustrations for his Idylls of the King. These photographs are designed to resemble oil paintings from the same time period, including rich details such as historical costumes and intricate draperies. Cameron saw these photographs as art, comparable to the oil paintings they imitated.

Cameron posed May Prinsep (Hallam Tennyson’s wife) to model as Beatrice Cenci in an 1866 albumen print portrait among a series she devoted to Cenci, illustrating a heroic legend developed in Rome when Cenci was executed for killing her brutal father who abused her and other members of their family. 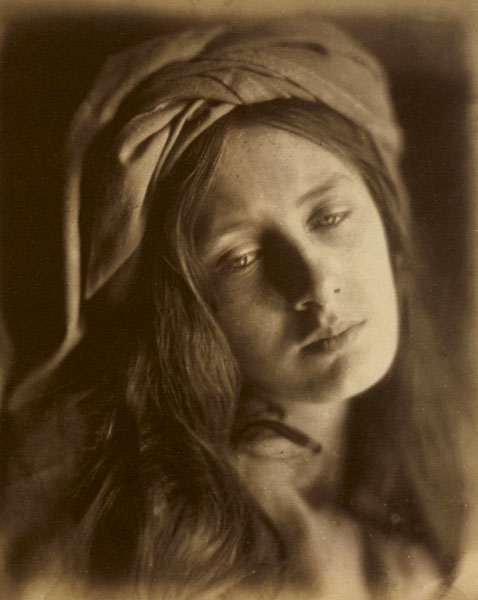 In 1875, the Camerons moved back to Ceylon (now Sri Lanka). Cameron continued to practice photography, but she complained in letters about the difficulties of getting chemicals and pure water to develop and print photographs. Also, in Ceylon, she did not have access to the Little Holland House salon’s artistic community for subjects. She also did not have a market to distribute her photographs as she had in England. Because of this, Cameron took fewer images in Ceylon.

Those she did were of posed Ceylonese people, paralleling the posed pictures that Cameron had taken of neighbors in England. Almost none of Cameron’s work from Ceylon survives. 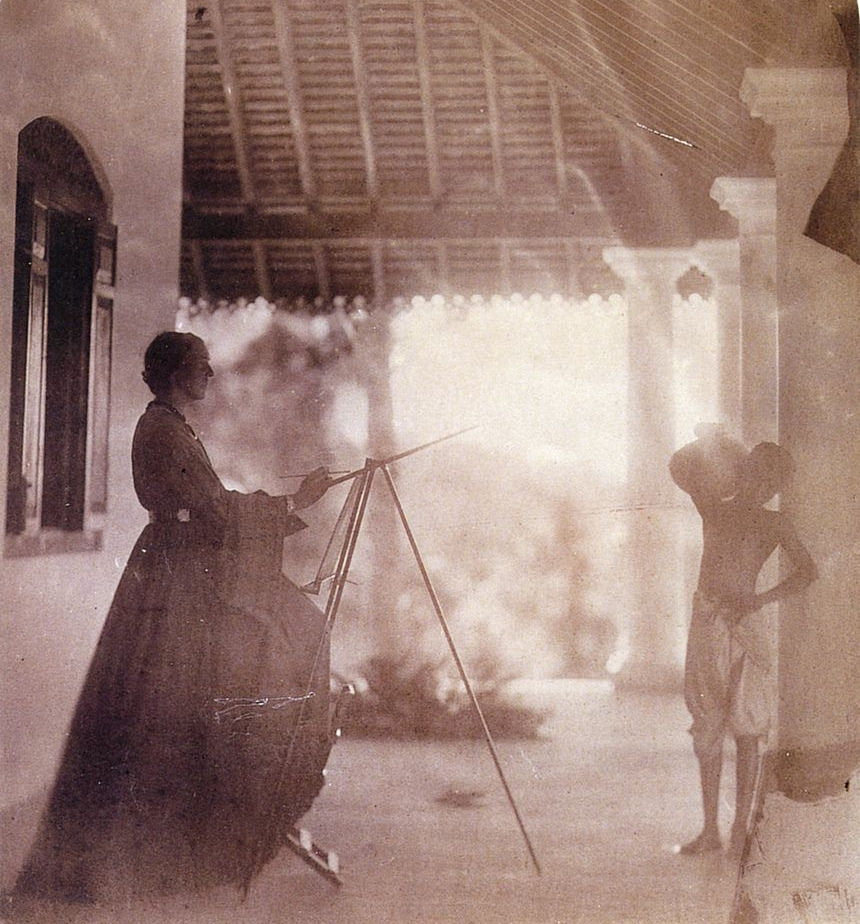 Cameron died while in Ceylon. Her death is attributed to having caught a bad chill and she died in Kalutara, Ceylon in 1879. Her last word is reportedly to have been, “Beautiful.” 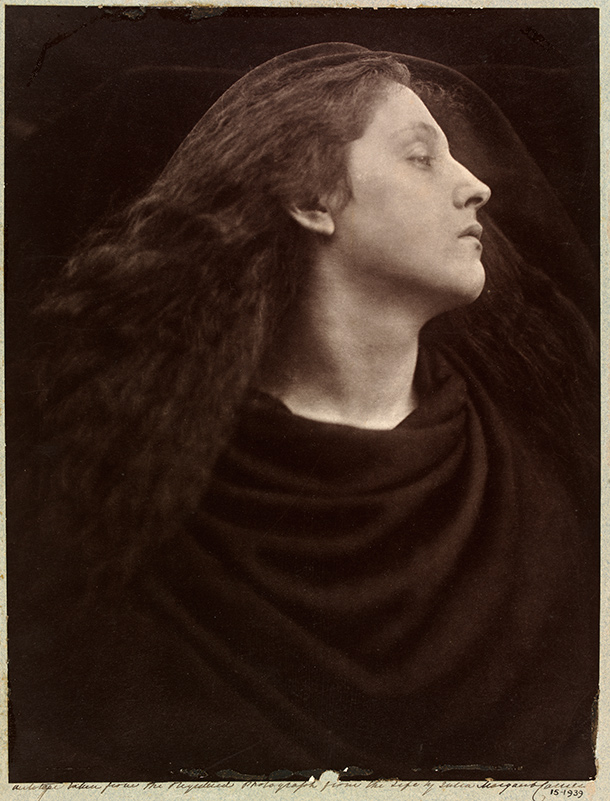