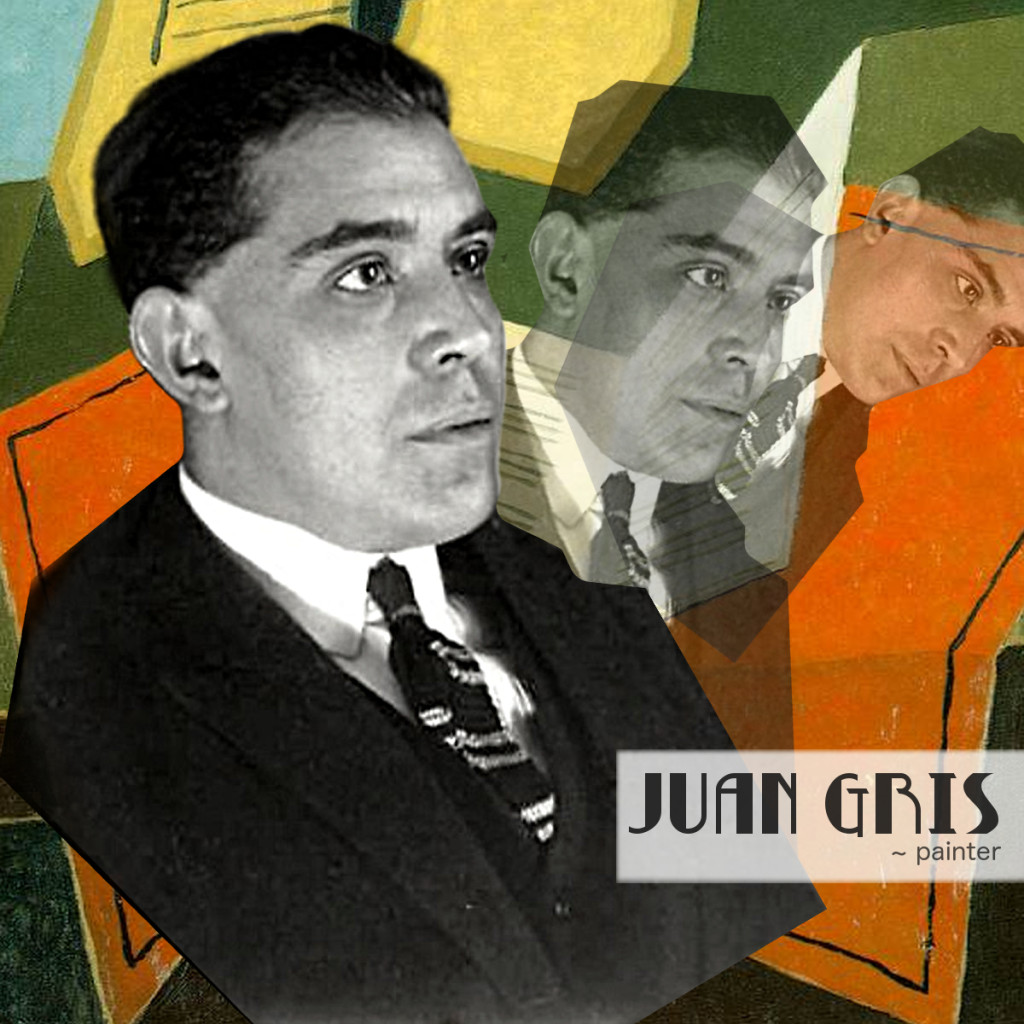 José Victoriano (Carmelo Carlos) González-Pérez, better known as Juan Gris, was a Spanish painter and sculptor born in Madrid who lived and worked in France most of his life. Closely connected to the innovative artistic genre Cubism, his works are among the movement’s most distinctive.

Gris was born in Madrid. He later studied engineering at Madrid’s School of Arts and Sciences. There, from 1902 to 1904, he contributed drawings to local periodicals. From 1904 to 1905, he studied painting with the academic artist José Moreno Carbonero. It was in 1905 that José Victoriano González adopted the more distinctive name Juan Gris.

In 1906 he moved to Paris and became friends with Henri Matisse, Georges Braque and Fernand Léger. In Paris, Gris followed the lead of another friend and fellow countryman, Pablo Picasso. He submitted darkly humorous illustrations to journals such as Le Rire, L’assiette au beurre, Le Charivari, and Le Cri de Paris.

Gris began to paint seriously in 1910 (when he gave up working as a satirical cartoonist), developing at this time a personal Cubist style. In “A Life of Picasso,” John Richardson writes that Jean Metzinger’s 1911 work, Le goûter (Tea Time), persuaded Juan Gris of the importance of mathematics in painting. Gris exhibited for the first time at the 1912 Salon des Indépendants (a painting entitled Hommage à Pablo Picasso). Although Gris regarded Picasso as a teacher, Gertrude Stein wrote in “The Autobiography of Alice B. Toklas” that “Juan Gris was the only person whom Picasso wished away.”

At first Gris painted in the style of Analytical Cubism, a term he himself later coined, but after 1913 he began his conversion to Synthetic Cubism, of which he became a steadfast interpreter, with extensive use of papier collé or, collage. Unlike Picasso and Braque, whose Cubist works were practically monochromatic, Gris painted with bright harmonious colors in daring, novel combinations in the manner of his friend Matisse. Gris exhibited with the painters of the Puteaux Group in the Salon de la Section d’Or in 1912. His preference for clarity and order influenced the Purist style of Amédée Ozenfant and Charles Edouard Jeanneret (Le Corbusier), and made Gris an important exemplar of the post-war “return to order” movement.

Gris’s works from late 1916 through 1917 exhibit a greater simplification of geometric structure, a blurring of the distinction between objects and setting, between subject matter and background. The oblique overlapping planar constructions, tending away from equilibrium, can best be seen in Woman with Mandolin, after Corot (September 1916) and in its epilogue, Portrait of Josette Gris (October 1916; Museo Reina Sofia).

Beginning around October 1925, Gris was frequently ill with bouts of uremia and cardiac problems. He eventually died of renal failure in Boulogne-sur-Seine (Paris) on May 11, 1927, at the age of 40, leaving a wife, Josette, and a son, Georges.

He was laid to rest at the Cimetiere de Boulogne-sur-Seine, in Boulogne-Billancourt, Île-de-France, France. His funeral was attended by numerous figures from the art world, including Georges Braque, Gertrude Stein, and Pablo Picasso. Though the relationship between Gris and Picasso was easily described as “tumultuous,” Picasso’s presence at the service for Gris was quite telling (as Picasso was well known for his fear of funerals and very rarely attended any), as was his assistance to Gris’s widow Josette after Gris’s death.