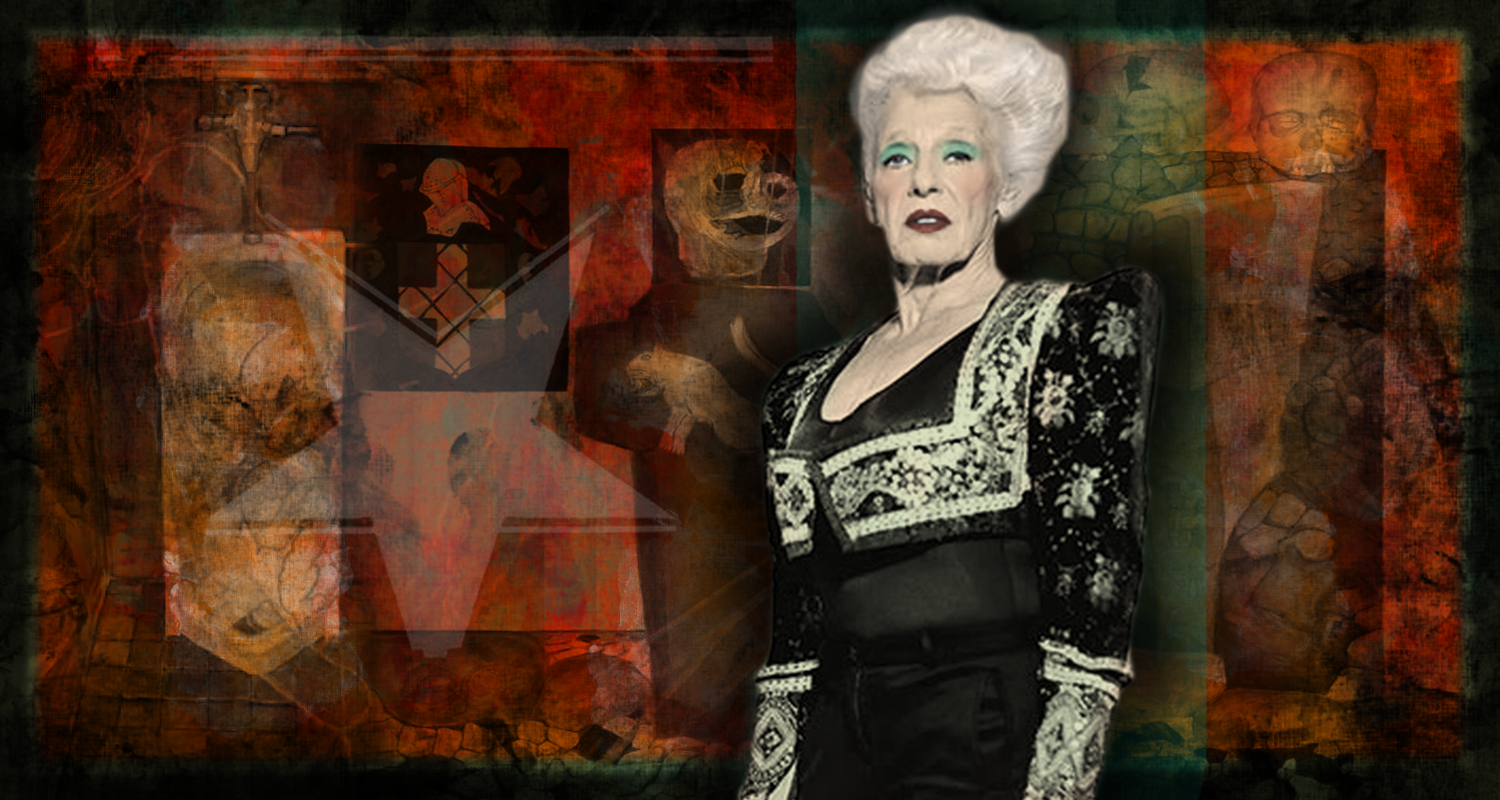 Jo Baer (born August 7, 1929) is an American painter, whose works are associated with minimalist art. She began exhibiting her work at the Fischbach Gallery, New York, and other venues for contemporary art in the mid-1960s. In the mid-1970s, she turned away from non-objective painting. Since then, Baer has fused images, symbols, words, and phrases in a non-narrative manner, a mode of expression she once termed “radical figuration.” 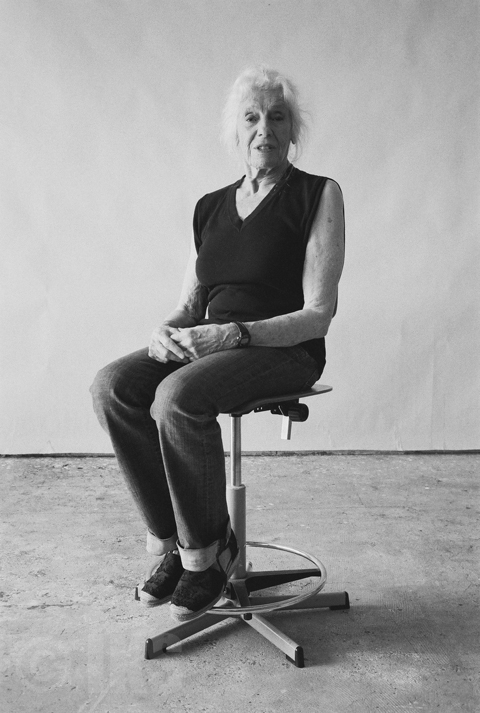 She was born Josephine Gail Kleinberg into an upper-middle-class family. Her mother, Hortense Kalisher Kleinberg, a commercial artist, was a fierce proponent of women’s rights and imbued her daughter with a sense of independence. Her father, Lester Kleinberg, was a successful commodities broker in hay and grain. Josephine studied art as a child at the Cornish College of the Arts, but because her mother wanted her to become a medical illustrator, she majored in biology at the University of Washington, Seattle, which she attended from 1946-1949. She dropped out of school in her junior year to marry a fellow-student at the University, Gerard L. Hanauer. 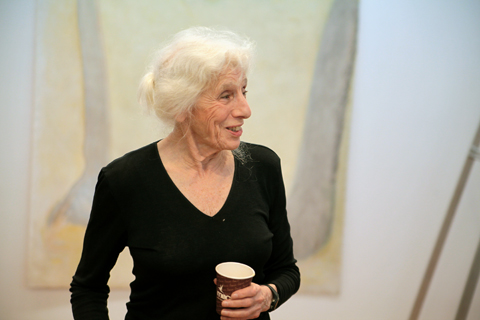 The marriage was over quickly, and in 1950, Baer went to Israel to explore the realities of rural socialism on various kibbutzim for a few months. Returning to New York City, from 1950–53 she did the course work for a master’s degree in psychology at the New School for Social Research. Baer went to school at night, while during the day she was employed by an interior design studio as a draftsman and secretary. 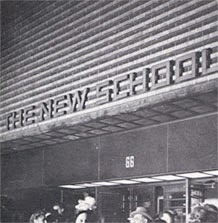 Baer moved to Los Angeles in 1953 and shortly afterwards married Richard Baer, a television writer. Their son, Joshua Baer, who became an art dealer, writer, and consultant, was born in 1955; the couple was divorced in the late 1950s. During this time Baer began to paint and draw for the first time since adolescence, becoming friends with Edward Kienholz and other local artists in the orbit of the Ferus Gallery. She met the painter John Wesley, to whom she was married from 1960-1970. She, Wesley, and Joshua moved to New York in 1960, where Baer lived until 1975. After separating from Wesley, she was in a long-term relationship with the sculptor Robert Lawrance Lobe.

Baer’s work of the late 1950s emulated paintings by members of the New York School, particularly Arshile Gorky, Robert Motherwell, Clyfford Still, and Mark Rothko. Rothko, she observed, “gave me permission to work with a format.” Jasper Johns’s paintings and sculpture also made an immediate impression, because they suggested “how a work should be the thing itself.”

She then introduced an even more pared-down format: the image was excised and the central area of the canvas became completely white. In 1962 Baer began the Korean series, a group of sixteen canvases. The Koreans were given their name by the art dealer Richard Bellamy, who said that Baer’s paintings were just as unknown as Korean art was to most Westerners.

The Koreans were composed of a dominant field of densely painted white enclosed by bands of sky blue and black that seem to shimmer and move: this optical illusion underscored Baer’s focus on “the notion of light.” Baer ascribed her inspiration for the Koreans to Samuel Beckett’s novel The Unnamble, which she was reading at the time. His observations about osmosis and diffusion through membranes influenced her to examine the properties of boundaries between spaces.

In many works that Baer created between 1964 and 1966, the peripheries and edges of the canvas continued to be marked by two square or rectangular bands of color. The outer, thicker border was black; inside it, a thinner band was painted in another color, such as red, green, lavender, or blue. Baer summed up the artistic concerns of her own work in 1971, writing, “Non-objective painting’s language is rooted, nowadays, in edges and boundaries, contours and gradients, brightness, darkness and color reflections. Its syntax is motion and change.” 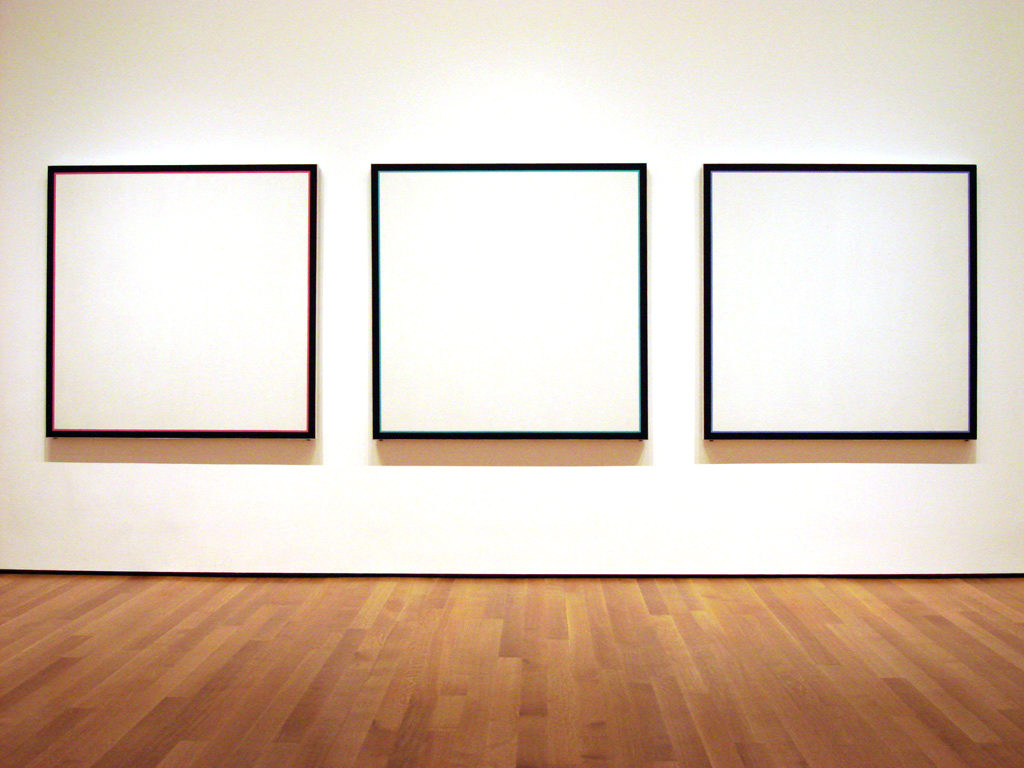 Baer was accepted as a peer in the burgeoning Minimalist movement by such artists as Sol LeWitt, Donald Judd, and Dan Flavin. In 1964 Flavin organized “Eleven Artists,” an exhibition that was an important step in defining the key figures of Minimalism. He included Baer, along with Judd, Flavin, LeWitt, Ward Jackson, Frank Stella, Irwin Fleminger, Larry Poons, Walter Darby Bannard, Robert Ryman, Leo Valledor, and himself.

In 1966 Baer’s first one-person show took place at the Fischbach Gallery, then a center for avant-garde art. That year she was also represented in both “Systemic Painting,” a survey exhibition of contemporary geometric abstraction at the Solomon R. Guggenheim Museum in New York, and “10,” a group exhibition at the Virginia Dwan Gallery co-curated by Ad Reinhardt and Robert Smithson that further enshrined its participants as canonical for Minimalism. Besides Baer, Reinhardt, and Smithson, the other artists selected were Carl Andre, Judd, LeWitt, Flavin, Robert Morris, Michael Steiner, and Agnes Martin. Baer’s works shown in these exhibitions, which included vertical and horizontal single, diptych, and triptych paintings, established her avant-garde reputation in the New York art world.

In the late 1960s, Baer was experimenting with color and shifting the visual focus of her work. While working on the series The Stations of the Spectrum (1967-1969), Baer painted over their white surfaces to make them gray. She then turned them into triptychs because she saw that these paintings had more wall power when they were hung together. 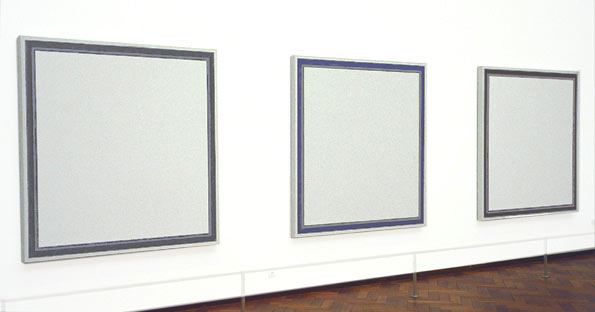 Next, as she said, “I wanted to know what happens around a corner – that interested me as an optical thing.” The result was the Wraparound paintings, where-in which Baer painted thick black bands edged by blues, greens, oranges, and lavenders that went around the sides of the canvas – areas that artists customarily ignore, overlook, or cover with a frame. More than ever, the action was at the edges: “Sensation,” Baer wrote, “is the edge of things. Where there are no edges, there are no places—a uniform visual field quickly disappears.”

Further challenging the notion of where a painting begins or ends, Baer added sweeping diagonal and curved paths of color that streaked across her once-inviolate white fields and down the sides of the canvas. These canvases bore titles like H. Arcuata (1971) and V. Lurida (1971). The titles were orotund flights of fancy – they identified fictitious specious of plants that she extrapolated from a book of botanical Latin she owned. (Baer was cultivating prize-winning orchids in the late 1960s, and became an expert on growing them inside an urban loft.) When translated into English, Baer’s Latinate letters and words have nothing to do with flowers; instead, they are visual descriptions masquerading as scientific diction. “H.” stands for “horizontal” and “V.” for “vertical.” “Arcuata” means curved, and “lurida” means “pale” or “shining.”

Baer was an active writer during her years in New York. In letters to editors, articles, and statements in art magazines, she defended the integrity and continuing importance of painting from attacks on it by Minimalist sculptors, who insisted that it had become an irrelevant art form that should be renounced in favor of the production of three-dimensional objects. Because she publicly questioned the tenets of a powerful pantheon of artists that included Judd and Morris, Baer was ostracized by a number of her former colleagues.

Among Baer’s most ambitious essays, for she which was able to employ her scientific training, was “Art & Vision: Mach Bands,” published in 1970. She tackled the physics and psychology of visual perception in her discussion of Mach bands, an optical illusion named after Ernest Mach, a nineteenth-century physicist who discovered that light-dark contrasts will intensify when opposing colors are placed next to each other: light areas will appear lighter and dark areas will seem darker. She linked this investigation into subjective sensations of the beholder to how edges, boundaries, and contours are experienced in modern art. 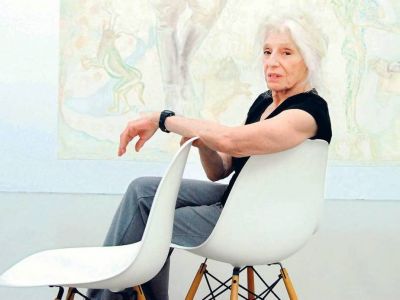 In 1975 Baer was the subject of a retrospective at the Whitney Museum of American Art, New York, showcasing her Minimalist work. However, Baer reached an impasse with non-objective painting. Sensing that her format had become a formula, she could go no further with it. Two transitional canvases –- M. Refractarius (1974–75) and The Old Year (1974–75) – record her desire to break away from Minimalism.

Baer needed a distance from New York’s art world, and in June 1975 she moved to Smarmore Castle, a manor and working farm with a Norman keep, in County Louth, Ireland. The castle is now a wellness center, focused on the treatment of addictions.

In 1977 Baer had a one-person exhibition at the Museum of Modern Art, Oxford, and during the course of it she met the British artist Bruce Robbins. The two lived and worked together from 1978-1984, first in Ireland and then from 1982-1984 in London, creating paintings, drawings, and texts. Their collaborations were shown in eight two-person exhibitions. While in London, Baer wrote one of her best-known articles, “I am no longer an abstract artist,” a manifesto published in Art in America in October 1983. Baer chronicled “abstraction’s demise,” and in characterizing its meaninglessness in a vastly changed world, claimed openness, ambiguity, “metaphor, symbolism, and hierarchical relationships” as necessary building blocks of modern works. Baer announced that she and Robbins were working toward a “radical figuration” based on those constructs.

In 1984, Baer moved by herself to Amsterdam, where she has lived ever since. In the 1990s Baer’s paintings became, in her words, “more declarative,” with richer colors, sharper light-dark contrasts, and more ambitious cultural and social criticism. Disparate images and symbols from American, European, Asian, and classical civilizations are fused with quotations from literature and densely layered allusions to the themes of war, sexuality, the destruction of the natural world, greed, injustice, repression, transience, and death. Two paintings in this style are Shrine of the Piggies (The Pigs Hog it All and Defacate and Piss on Where From They Get It and With Whom They Will Not Share. That s It) (2000) and Testament of the Powers That Be (Where Trees Turn to Sand, Residual Colours Stain the Lands) (2001).

Baer has also painted several autobiographical meditations on the twists and turns of her own life, most notably Altar of the Egos (Through a Glass Darkly) (2004), Memorial for an Art World Body (Nevermore) (2009), and a series of 6 works for exhibition at the Stedelijk Museum in 2013, titled In the Land of the Giants (2011). Baer’s writings over the years were brought together in Broadsides & Belles Lettres: Selected Writings and Interviews 1965–2010, which provide a general commentary on art as well as her own attitudes to her work.

At the time of this writing, Jo Baer is 87 years old and still painting, writing, exhibiting her work and giving the world the gift of her mind and heart.