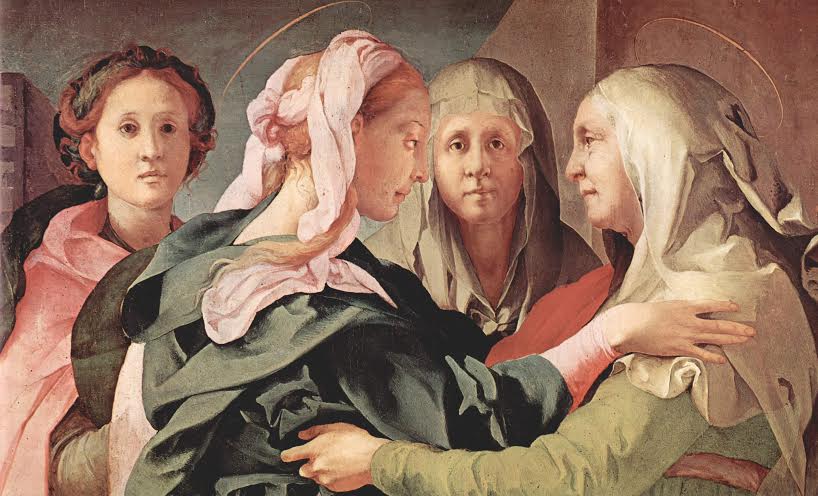 Jacopo Carucci (May 24, 1494 – January 2, 1557), usually known as Jacopo da Pontormo, Jacopo Pontormo or simply Pontormo, was an Italian Mannerist painter and portraitist from the Florentine School. His work represents a profound stylistic shift from the calm perspectival regularity that characterized the art of the Florentine Renaissance. He is famous for his use of twining poses, coupled with ambiguous perspective; his figures often seem to float in an uncertain environment, unhampered by the forces of gravity.

Jacopo Carucci was born at Pontorme, near Empoli, to Bartolomeo di Jacopo di Martino Carrucci and Alessandra di Pasquale di Zanobi. Orphaned at a young age, the Renaissance historian Vasari relates how, the “young, melancholy and lonely boy,” was shuttled around as a young apprentice, foreshadowing his legendary temperament: “Jacopo had not been many months in Florence before Bernardo Vettori sent him to stay with Leonardo da Vinci, and then with Mariotto Albertinelli, Piero di Cosimo, and finally, in 1512, with Andrea del Sarto, with whom he did not remain long, for after he had done the cartoons for the arch of the Servites, it does not seem that Andrea bore him any good will, whatever the cause may have been.”

Pontormo painted in and around Florence, often supported by Medici patronage. A foray to Rome, largely to see Michelangelo’s work, influenced his later style. Haunted faces and elongated bodies are characteristic of his work. An example of his early style is a fresco depicting the Visitation of the Virgin and St Elizabeth, with its dancelike, balanced figures, painted from 1514 to 1516.

Done around the same time as the Visitation, His series on the life of Joseph, show a much more mannerist leaning. According to Giorgio Vasari, the sitter for the boy seated on a step is his young apprentice, Bronzino.

In 1522, when the plague broke out in Florence, Pontormo left for the Certosa di Galluzzo, a cloistered Carthusian monastery where the monks followed vows of silence. He painted a series of frescoes, now quite damaged, on the passion and resurrection of Christ.

The emotionally charged, large altarpiece canvas for the Brunelleschi-designed Capponi Chapel in the church of Santa Felicità, Florence, portraying The Deposition from the Cross, is considered by many Pontormo’s surviving masterpiece (1528). The figures, with their sharply modeled forms and brilliant colors are united in an enormously complex, swirling ovular composition, housed by a shallow, somewhat flattened space. Although commonly known as The Deposition from the Cross, there is no actual cross in the picture. The scene might more properly be called a Lamentation or Bearing the Body of Christ.

Those who are lowering (or supporting) Christ appear as anguished as the mourners. Though they are bearing the weight of a full-grown man, they barely seem to be touching the ground; the lower figure in particular balances delicately and implausibly on his front two toes. These two boys have sometimes been interpreted as angels, carrying Christ in his journey to Heaven. It has been speculated that the bearded figure in the background at the far right is a self-portrait of Pontormo as Joseph of Arimathea.

On the wall to the right of the Deposition, Pontormo frescoed an Annunciation scene. As with the Deposition, the artist’s primary attention is on the figures themselves rather than their setting. Placed against white walls, the Angel Gabriel and Virgin Mary are presented in an environment that is so simplified as to almost seem stark. The fictive architectural details above each of them, are painted to resemble the gray stone pietra serena that adorns the interior of Santa Felicità, thus uniting their painted space with the viewer’s actual space. The startling contrast between the figures and ground makes their brilliant garments almost seem to glow in the light of the window between them, against the stripped-down background, as if the couple miraculously appeared in an extension of the chapel wall.

Vasari tells us that the cupola was originally painted with God the Father and Four Patriarchs. The decoration in the dome of the chapel is now lost, but four roundels with the Evangelists still adorn the pendentives, worked on by both Pontormo and his chief pupil Agnolo Bronzino. The two artists collaborated so intimately, that specialists dispute which roundels each of them painted. Looking at each of the four however, one notices immediately that the style of the St. Matthew roundel appears distinctively different with heavier line and a more intense mannerist style than the other three. For this reason, many scholars believe that Bronzino completed this work on his own, or at least the majority of it.

This tumultuous oval of figures took three years for Pontormo to complete. According to Vasari, because Pontormo desired above all to “do things his own way without being bothered by anyone,” the artist screened off the chapel so as to prevent interfering opinions. Vasari continues, “And so, having painted it in his own way without any of his friends being able to point anything out to him, it was finally uncovered and seen with astonishment by all of Florence…”

A number of Pontormo’s other works have also remained in Florence; the Uffizi Gallery holds his mystical Supper at Emmaus as well as a number of portraits.

Many of Pontormo’s work has been lost to history, but most tragic is the loss of the unfinished frescoes for the Basilica of San Lorenzo, Florence which consumed the last decade of his life. His frescoes depicted a Last Judgment day composed of an unsettling morass of writhing figures. Upon the death of Pontormo, his loyal and exceedingly patient pupil, apprentice, and seemingly only friend Agnolo Bronzino completed the fresco cycle around 1578. The sensual theme of the cycle was never fully accepted, culminating finally in 1738 when a shift toward an even more conservative orthodoxy in the church led to their destruction.  The drawings that remain however, show a bizarre and mystical ribboning of bodies that had an almost hallucinatory effect.

Vasari’s Life of Pontormo depicts him as withdrawn and steeped in neurosis while at the center of the artists and patrons of his lifetime. This image of Pontormo has tended to color the popular conception of the artist, as seen in the film of Giovanni Fago, Pontormo, a heretical love. Fago, portrays Pontormo as mired in a lonely and ultimately paranoid dedication to his final Last Judgment project, which he often kept shielded from onlookers. Yet as the art historian Elizabeth Pilliod has pointed out, Vasari was in fierce competition with the Pontormo/Bronzino workshop at the time when he was writing his Lives of the Most Excellent Painters, Sculptors, and Architects. This professional rivalry between the two bottegas could well have provided Vasari with ample motivation for running down the artistic lineage of his opponent for Medici patronage. 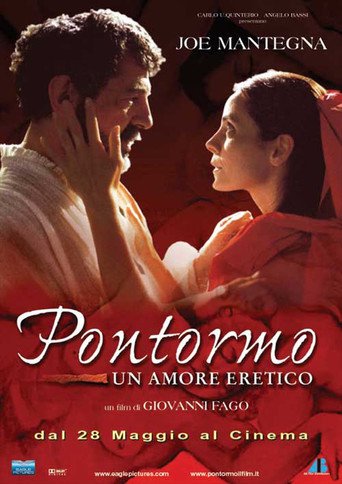 Perhaps as a result of Vasari’s derision, or perhaps because of the vagaries of aesthetic taste, Pontormo’s work was quite out of fashion for several centuries. The fact that so much of his work has been lost or severely damaged is testament to this neglect, though he has received renewed attention by contemporary art historians. Indeed, between 1989 and 2002, his Portrait of a Halberdier, held the title of the world’s most expensive painting by an Old Master, purchased for $35.2 million in 1989 by the Getty Museum.

Regardless as to the veracity of Vasari’s account, it is certainly true that Pontormo’s artistic idiosyncrasies produced a style that few were able (or willing) to imitate, with the exception of his closest pupil Bronzino. As for his alleged temperament, the diary that Pontormo kept the last two years of his life reveal that Vasari may have exaggerated some of Jacopo’s characteristics, but probably not by much. Most of the diary consists of tracking his bowel movements and other bodily functions, as well as a clear need to avoid humanity whenever possible, writing things like, “15th Sunday – Bronzino knocked at my door and then during the day Daniello; I know not what they wanted.” Pontormo also seemed to have had a ladder to his bedroom which he would draw up after him, making contact with the Master even more difficult.

In his declining years, it seems he descended into a kind of madness and spent most of his time shut up in his studio “chatting with angels” that he claimed lived in a tree outside his window. Old friends tried to intervene and often left him baskets of food and coins on the doorstep. He ignored the intentions of friends and fellow artists that wanted to help, believing they were in league with the devil.

His final years were sadly spent in great pain, roaming the streets, disheveled and fearful, a shell of his former self. He died a pauper’s death, a victim of what was known at the time as “dropsy,” today recognized as edema. He was buried on January 2, 1557 in the sumptuous Church of Santissima Annunziata, in the quiet chapel of St. Luke, the same chapel that contains his Sacra Conversazione, completed when he was just 19 years old. Opposite this is the Trinity, by his beloved Bronzino, marking Pontormo’s final resting place. Bronzino created the memorial to him including two portraits; Bronzino himself is on the right, Pontormo on the left.