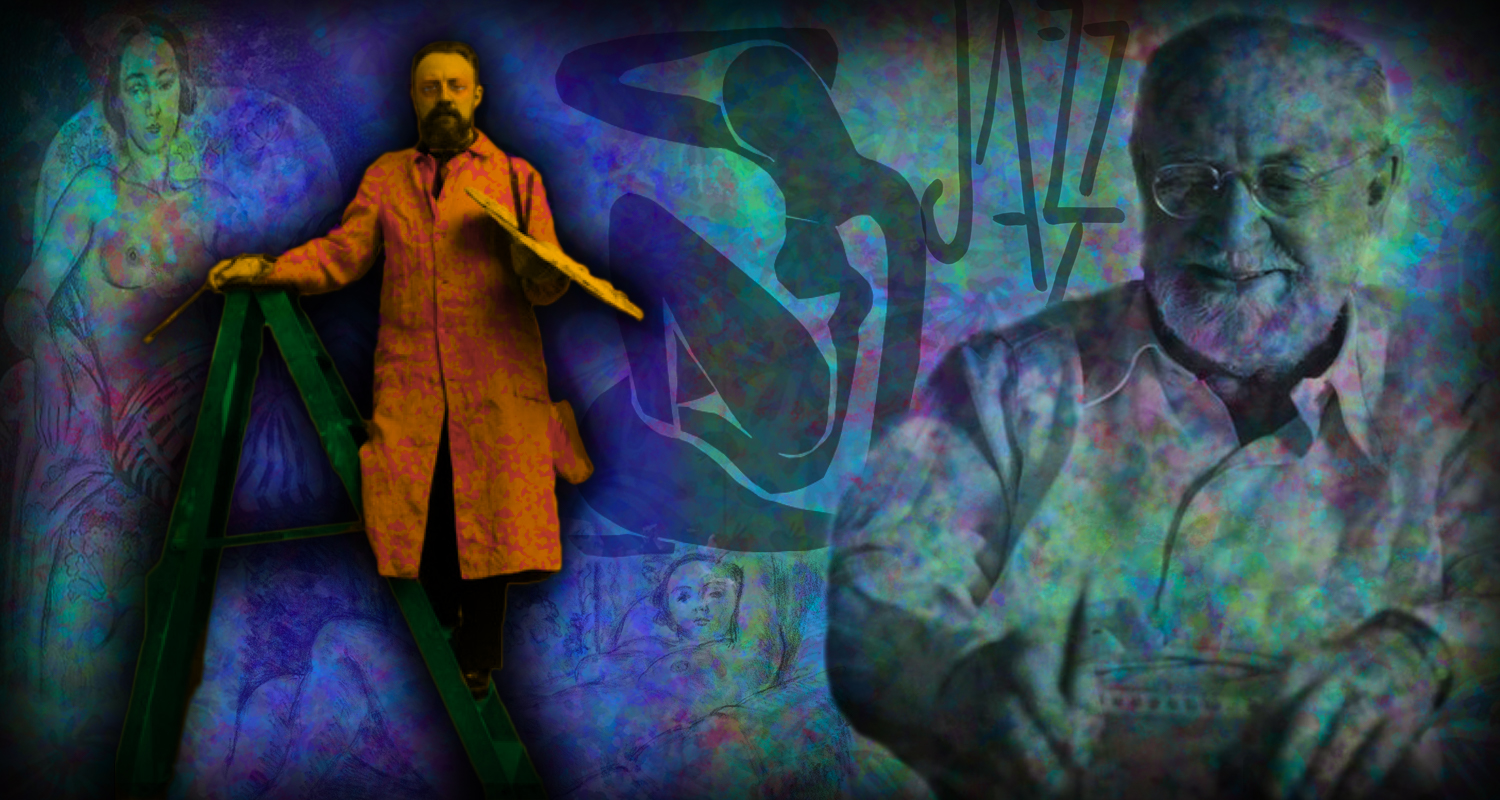 Henri Matisse (31 December 1869 – 3 November 1954) was a revolutionary and influential artist of the early 20th century, best known for the expressive color and form of his Fauvist style. 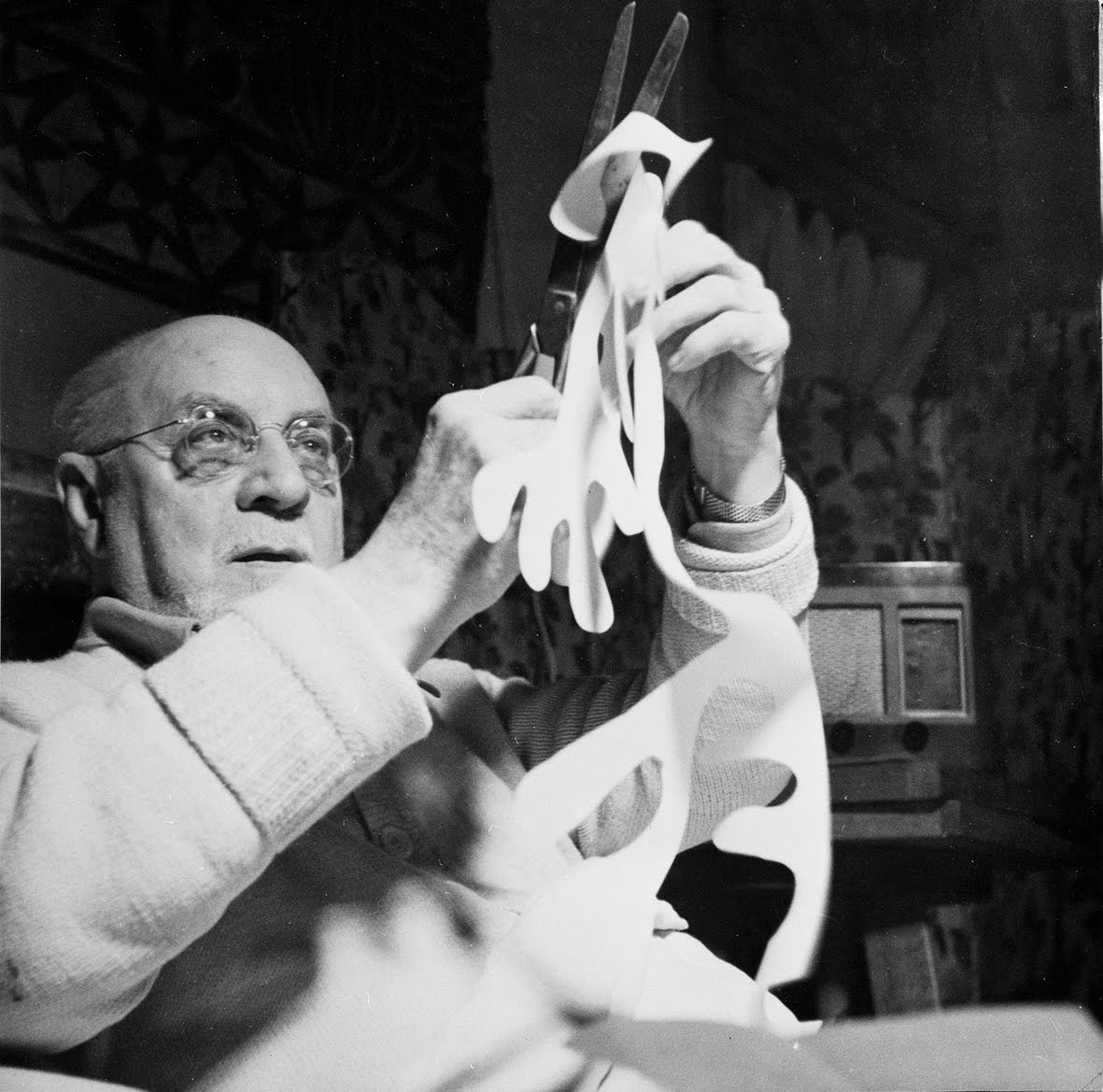 “My choice of colors does not rest on any scientific theory; it is based on observation, on sensitivity, on felt experience.” —Henri Matisse

Henri Matisse was born December 31, 1869, in Le Cateau in northern France. Over a six-decade career he worked in all media, from painting to sculpture to printmaking. Although his subjects were traditional—nudes, figures in landscapes, portraits, interior views—his revolutionary use of brilliant color and exaggerated form to express emotion made him one of the most influential artists of the 20th century. 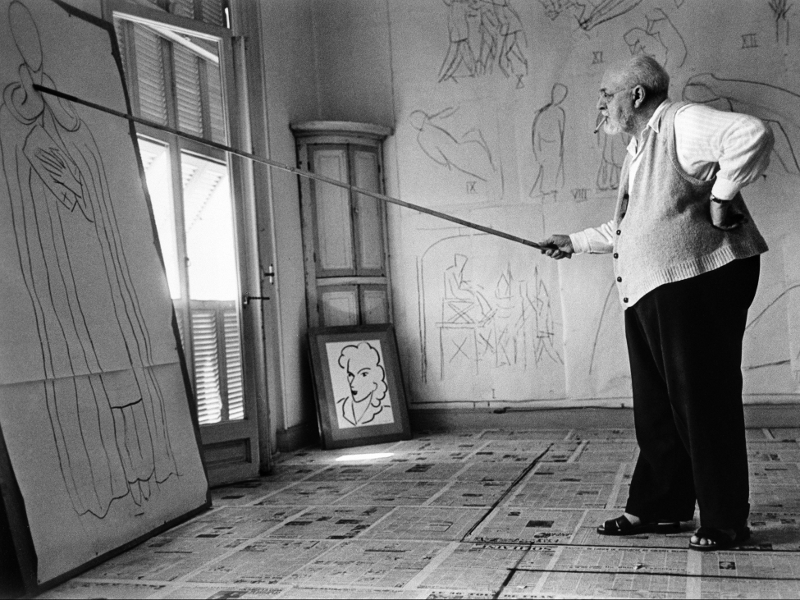 Henri Matisse was born on December 31, 1869, and was raised in the small industrial town of Bohain-en-Vermandois in northern France. His family worked in the grain business. As a young man Matisse worked as a legal clerk and then studied for a law degree in Paris in 1887-89. Returning to a position in a law office in the town of Saint-Quentin, he began taking a drawing class in the mornings before he went to work. When he was 21, Matisse began painting while recuperating from an illness, and his vocation as an artist was confirmed. 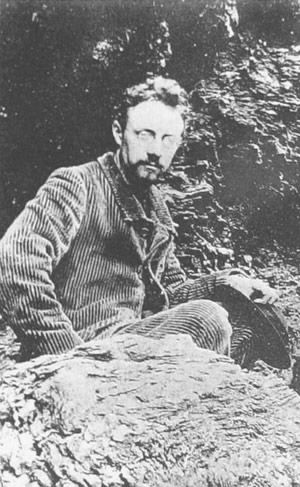 In 1891 Matisse moved to Paris for artistic training. He took instruction from famous, older artists at well-known schools such as the Académie Julian and the École des Beaux-Arts. These schools taught according to the “academic method,” which required working from live models and copying the works of Old Masters, but Matisse was also exposed to the recent Post-Impressionist work of Paul Cézanne and Vincent van Gogh while living in Paris. 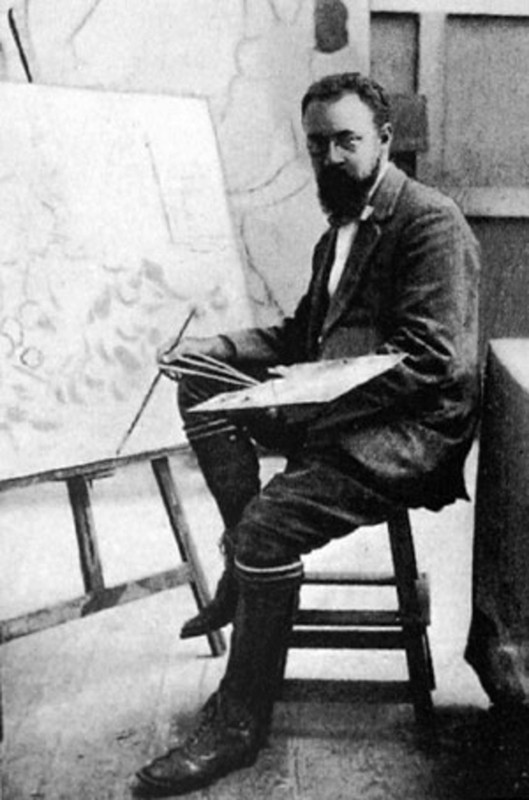 Matisse began to show his work in large group exhibitions in Paris in the mid-1890s, including the traditional Salon de la Société Nationale des Beaux-Arts, and his work received some favorable attention. He traveled to London and to Corsica, and in 1898 he married Amélie Parayre, with whom he would have three children.

By the turn of the 20th century, the young artist had come under the more progressive influence of Georges Seurat and Paul Signac, who painted in a “Pointillist” style with small dots of color rather than full brushstrokes. Matisse stopped exhibiting at the official Salon and began submitting his art to the more progressive Salon des Indépendants in 1901. In 1904 he had his first one-man exhibition at the gallery of dealer Ambroise Vollard.

Matisse had a major creative breakthrough in the years 1904-05. A visit to Saint-Tropez in southern France inspired him to paint bright, light-dappled canvases such as Luxe, calme et volupté (1904-05), and a summer in the Mediterranean village of Collioure produced his major works Open Window and Woman with a Hat in 1905. He exhibited both paintings in the 1905 Salon d’Automne exhibition in Paris. In a review of the show, a contemporary art critic mentioned the bold, distorted images painted by certain artists he nicknamed “fauves,” or “wild beasts.”

Painting in the style that came to be known as Fauvism, Matisse continued to emphasize the emotional power of sinuous lines, strong brushwork and acid-bright colors in works such as The Joy of Life, a large composition of female nudes in a landscape. Like much of Matisse’s mature work, this scene captured a mood rather than merely trying to depict the world realistically.

Between 1905 and 1906, Matisse painted four different copies of the same scene in “The Joy of Life,” (translated from the original French, “Le Bonheur de Vivre“). Two of the copies are at the Barnes Foundation in Philadelphia, one is at the San Francisco Museum of Modern Art and one is at the Museum of Copenhagen. The copy at the San Francisco Museum of Modern Art has maintained a vibrant yellow pigment that fills in the spaces between the reclining nudes in the middle the masterpiece. But a copy at the Barnes Foundation is gradually but steadily reacting with light and air and fading to a dull ivory color.

Researchers took samples from one of the copies at the Barnes Foundation. “If we want to study the full paint layer, we take a scalpel and remove a tiny sample of the painting” that is equivalent to the size of a period at the end of a sentence of a Times Roman 10-point font, said one of the scientists involved, Jennifer Mass. The research found that when that top layer was exposed to air, the water-resistant, bright-yellow cadmium sulfide Matisse (and many other artists at the time) had used, oxidizes into cadmium sulfate. The binder, an oil paint used to make the paint stick to the canvas, can degrade to beige cadmium carbonate and cadmium oxalate. As for why one copy was not fading, Mass suggests Matisse most likely had substituted another pigment rather than cadmium yellow.

In the first decade of the twentieth century, Matisse also made sculptures and drawings that were sometimes related to his paintings, always repeating and simplifying his forms to their essence.

After finding his own style, Matisse enjoyed a greater degree of success. He was able to travel to Italy, Germany, Spain and North Africa for inspiration. He bought a large studio in a suburb of Paris and signed a contract with the prestigious art dealers of Galerie Bernheim-Jeune in Paris. His art was purchased by prominent collectors such as Gertrude Stein in Paris and the Russian businessman Sergei I. Shchukin, who commissioned Matisse’s important pair of paintings Dance I and Music in 1909-10.

In his works of the 1910s and 1920s, Matisse continued to delight and surprise his viewers with his signature elements of saturated colors, flattened pictorial space, limited detail and strong outlines. Some works, like The Piano Lesson (1916), explored the structures and geometry of Cubism, the movement pioneered by Matisse’s lifelong rival Pablo Picasso. Yet despite his radical approach to color and form, Matisse’s subjects were often traditional: scenes of his own studio (including The Red Studio of 1911), portraits of friends and family, arrangements of figures in rooms or landscapes.

In 1917 Matisse began spending winters on the Mediterranean, and in 1921 he moved to the city of Nice on the French Riviera. From 1918-30, he most frequently painted female nudes in carefully staged settings within his studio, making use of warm lighting and patterned backgrounds. He also worked extensively in printmaking during these years.

The first scholarly book about Matisse was published in 1920, marking his importance in the history of modern art as it was still taking place.

In his later career, Matisse received several major commissions, such as a mural for the art gallery of collector Dr. Albert Barnes of Pennsylvania, titled Dance II, in 1931-33. He also drew book illustrations for a series of limited-edition poetry collections.

Matisse was diagnosed with duodonal cancer in 1941, and after surgery that same year, he was often bedridden. However, he continued to work from a bed in his studio. When necessary, he would draw with a pencil or charcoal attached to the end of a long pole that enabled him to reach the paper or canvas. 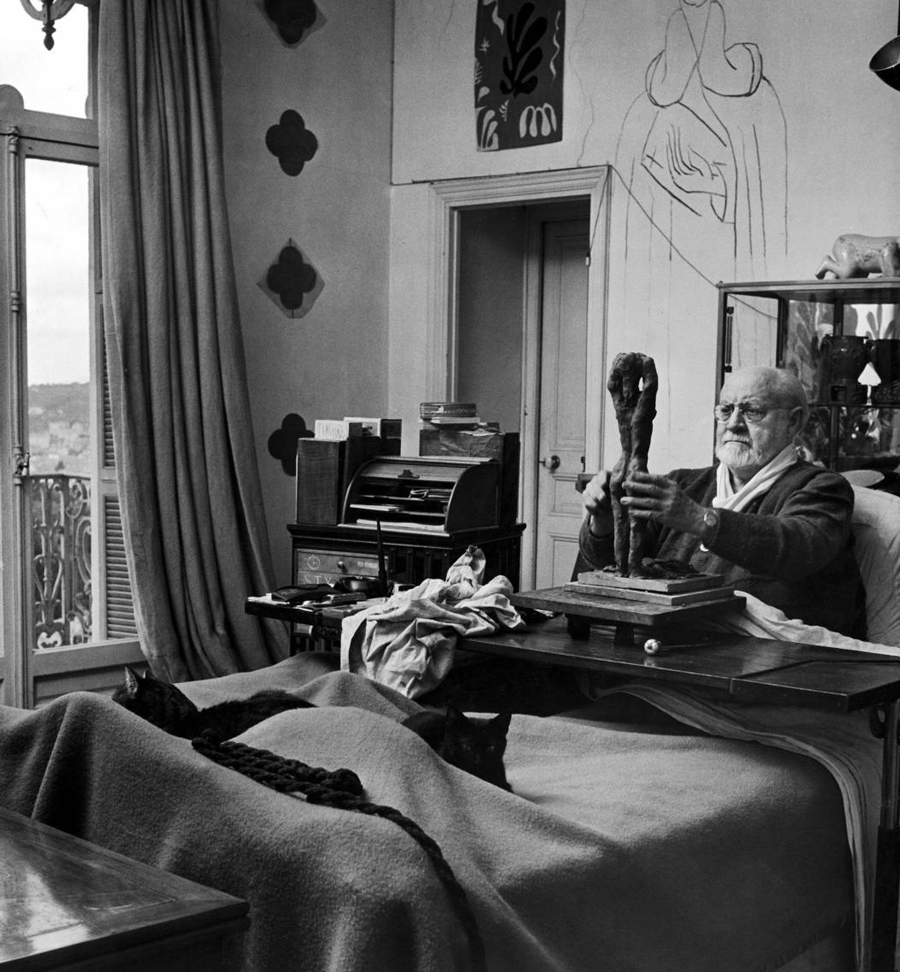 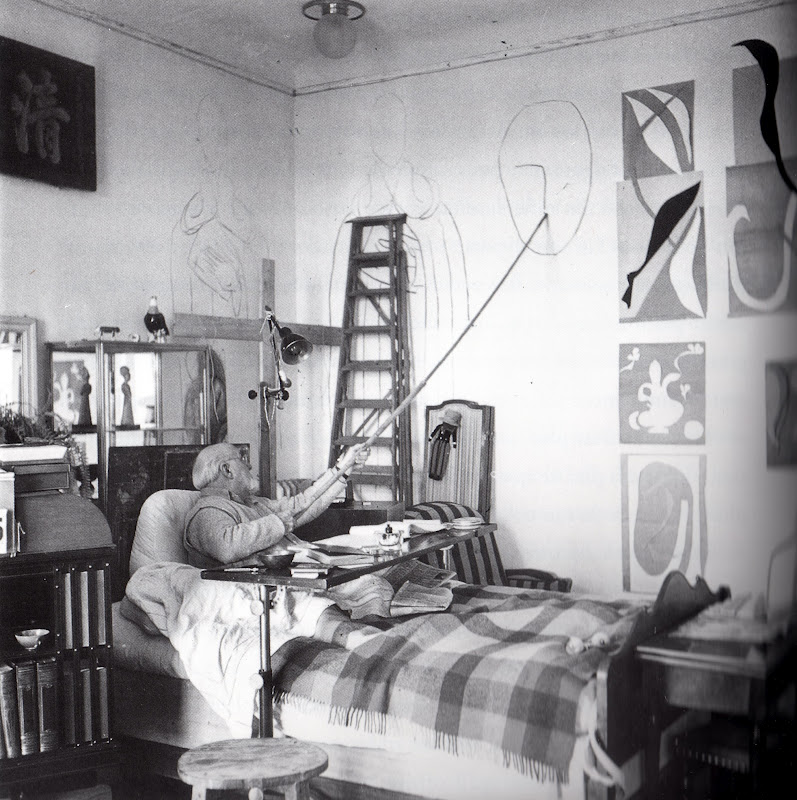 His late work was just as experimental and vibrant as his earlier artistic breakthroughs had been. It included his 1947 book Jazz, which placed his own thoughts on life and art side by side with lively images of colored paper cutouts. 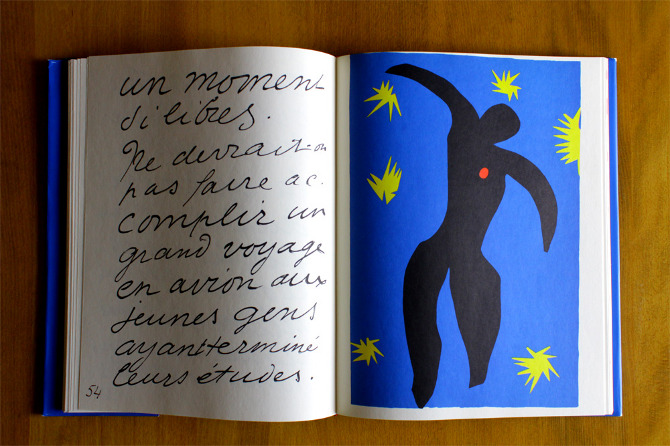 This project led him to devising works that were cutouts on their own, most notably several series of expressively shaped human figures cut from bright blue paper and pasted to wall-size background sheets (such as Swimming Pool, 1952).

In one of his final projects, Matisse created an entire program of decorations for the Chapel of the Rosary in Vence (1948-51), a town near Nice, designing stained-glass windows, murals, furnishings, and even sacred vestments for the church’s priests. 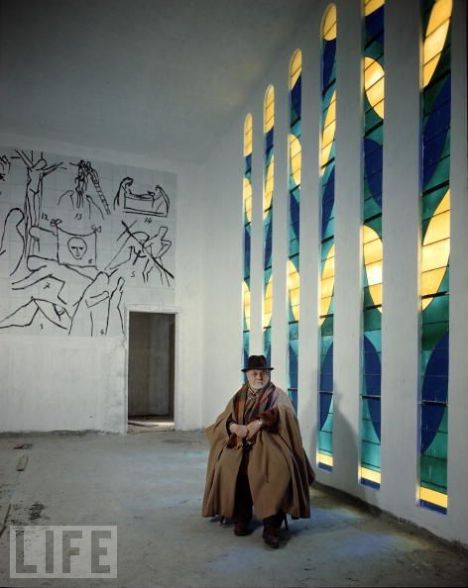 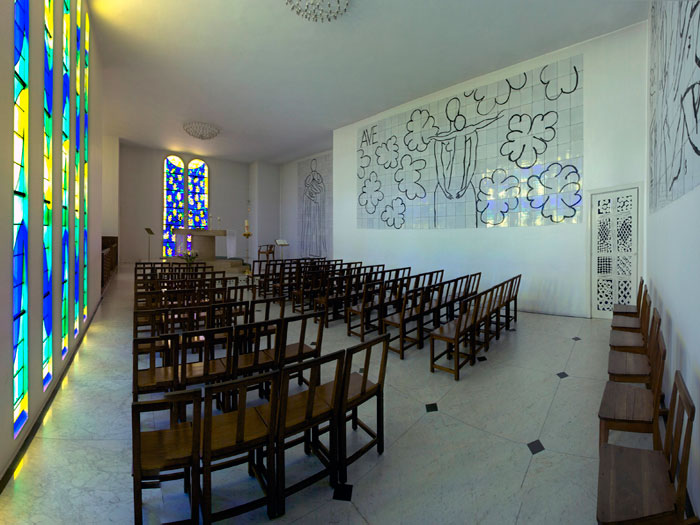 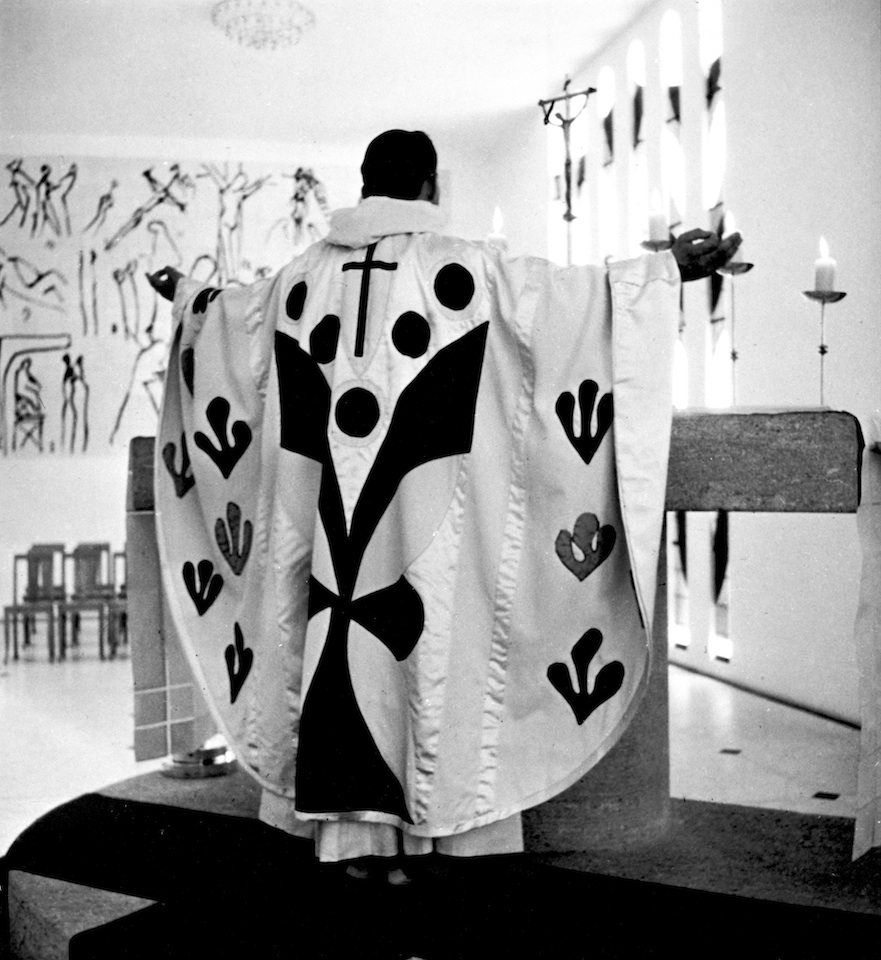 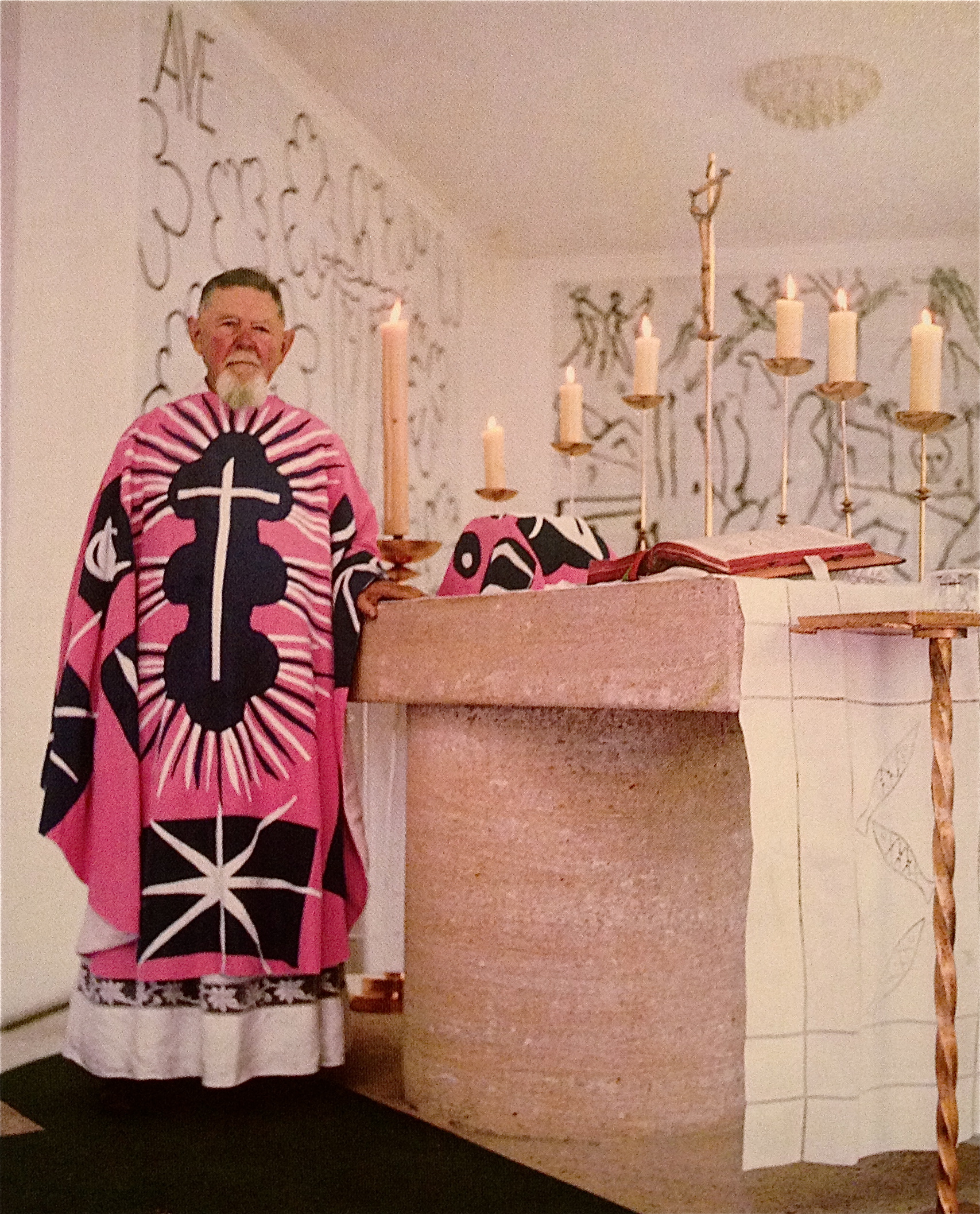 Henri Matisse suffered a massive heart attack and died on November 3, 1954, at the age of 84, in Nice. By his side were his daughter Margarite, and his longtime model, muse, friend, personal assistant and eventual caretaker, the painter Lydia Delectorskaya. 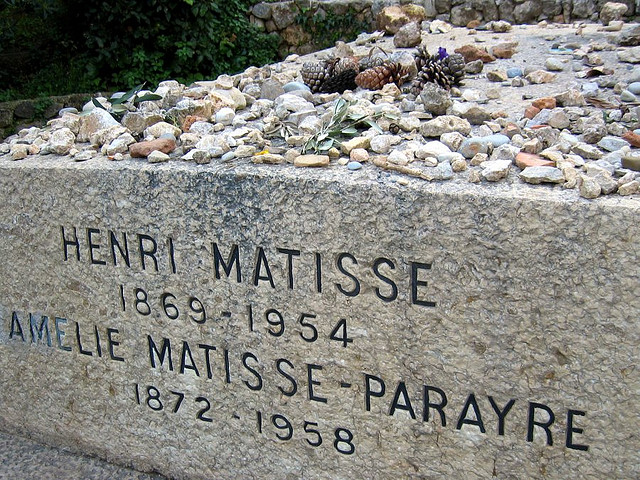