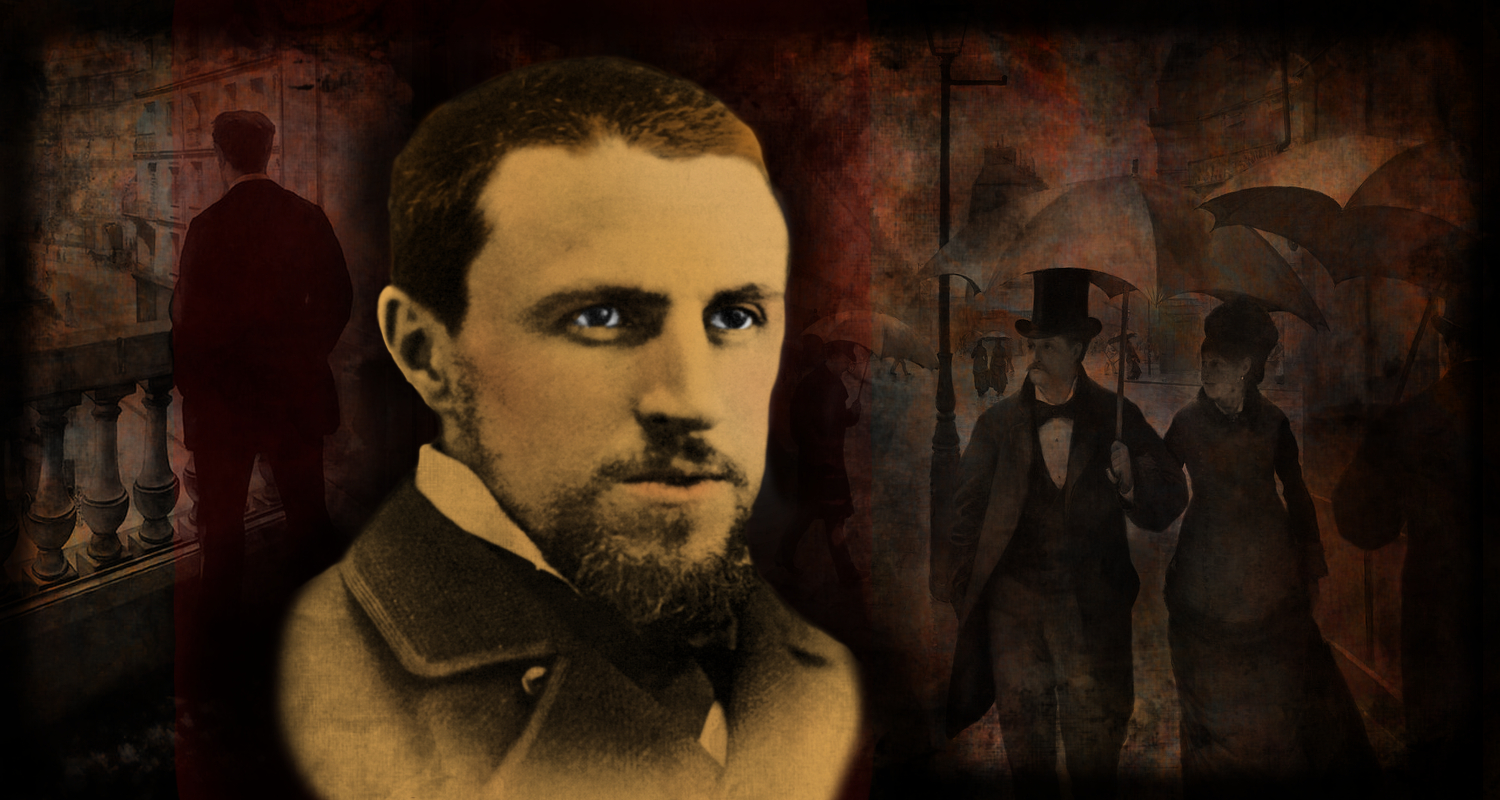 Gustave Caillebotte (1848–1894) was a French painter, member and patron of the artists known as Impressionists, although he painted in a much more realistic manner than many other artists in the group. Caillebotte was noted for his early interest in photography as an art form. 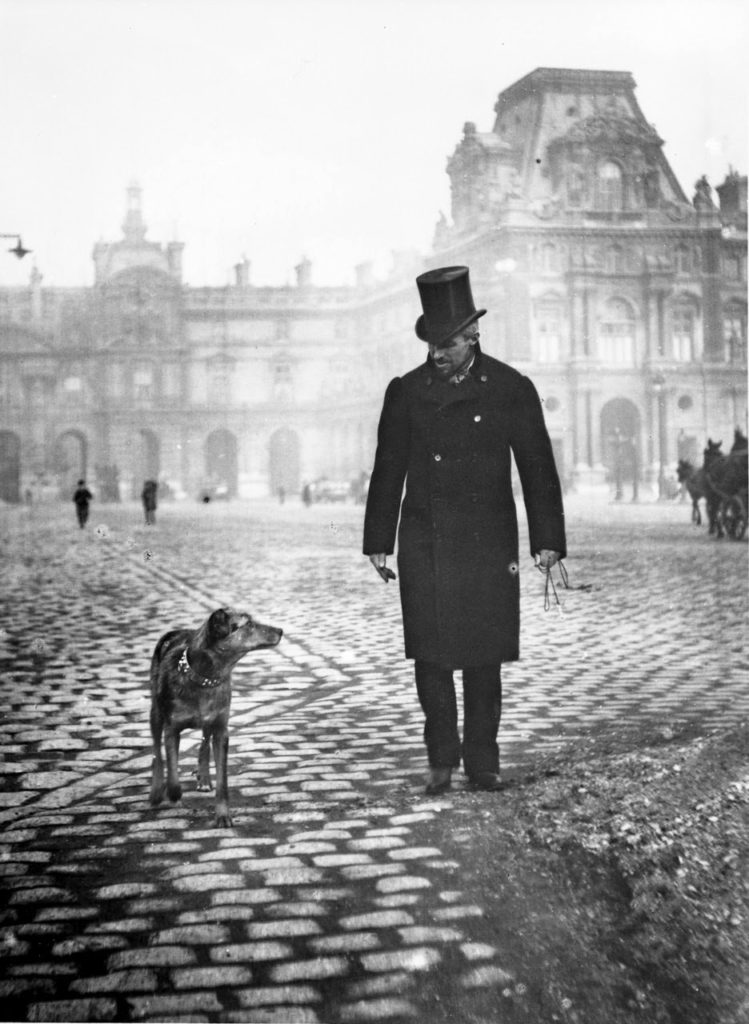 Gustave Caillebotte was born on 19 August 1848 to an upper-class Parisian family living in the rue du Faubourg-Saint-Denis. His father, Martial Caillebotte, was the inheritor of the family’s military textile business and was also a judge at the Seine department’s Tribunal de commerce. Caillebotte’s father was twice widowed before marrying Caillebotte’s mother, Céleste Daufresne, who had two more sons after Gustave, René and Martial.

Caillebotte earned a law degree in 1868, a license to practice law in 1870, and he was also was trained as an engineer. Shortly after his education, he was drafted to fight in the Franco-Prussian war, and served from July 1870 to March 1871 in the Garde Nationale Mobile de la Seine. 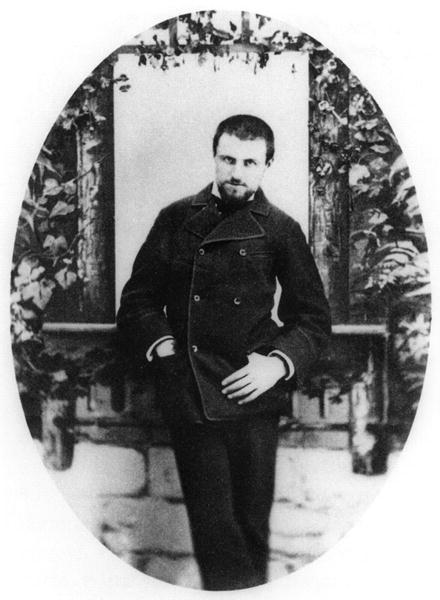 After the war, he began visiting the studio of painter Léon Bonnat, where he began to study painting seriously. He developed an accomplished style in a relatively short period of time and had his first studio in his parents’ home. In 1873, Caillebotte entered the École des Beaux-Arts, but apparently did not spend much time there. He inherited his father’s fortune in 1874 and the remaining sons divided the family fortune after their mother’s death in 1878. Around 1874, Caillebotte met and befriended several artists working outside the official French Academy, including Edgar Degas and Giuseppe de Nittis, and he attended (but did not participate in) the first Impressionist exhibition of 1874.

The “Impressionists” – also called the “Independents”, “Intransigents”, and “Intentionalists” – had broken away from the academic painters showing in the annual Salons. Caillebotte made his debut in the second Impressionist exhibition in 1876, showing eight paintings, including, Les Raboteurs De Parquet (The Floor Scrapers) (1875), his earliest masterpiece. Its subject matter, the depiction of laborers preparing a wooden floor (thought to have been that of the artist’s own studio) was considered “vulgar” by some critics and this is the probable reason for its rejection by the Salon of 1875. At the time, the art establishment deemed only rustic peasants or farmers as acceptable subjects from the working class. The painting now resides at the Musée d’Orsay. A second version, in a more realistic style resembling that of Degas, also was exhibited, demonstrating Caillebotte’s range of technique and his adept restatement of the same subject matter. 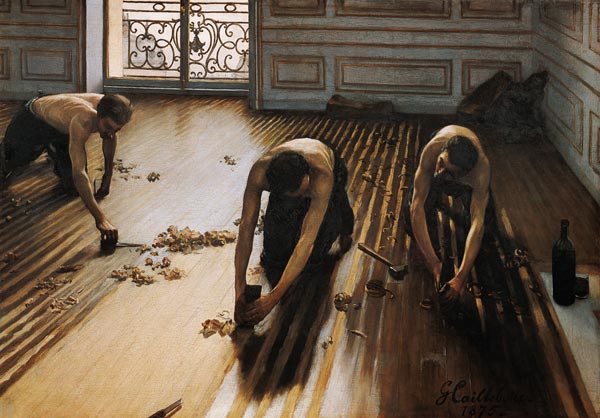 With regard to the composition and painting style of his works, Caillebotte may be considered part of Neo-Impressionism. His second period of Pointillism, whose main representative was Georges Seurat, announced its influence in Caillebotte’s late works, painted at his country house in Petit Gennevilliers. Caillebotte’s style belongs to the School of Realism, but was strongly influenced by his Impressionist associates.

In common with his precursors, Jean-François Millet and Gustave Courbet, as well his contemporary, Degas, Caillebotte aimed to paint reality as it existed and as he saw it, hoping to reduce the inherent theatricality of painting. Perhaps because of his close relationship with so many of his peers, his style and technique vary considerably among his works, as if “borrowing” and experimenting, but not really sticking to any one style. At times, he seems very much in the Degas camp of rich-colored realism (especially his interior scenes) and at other times, he shares the Impressionist commitment to “optical truth” and employs an impressionistic pastel-softness and loose brush strokes most similar to Renoir and Pissarro, although with a less vibrant palette.

The tilted ground common to these paintings is very characteristic of Caillebotte’s work, which may have been strongly influenced by Japanese prints and the new technology of photography, although evidence of his use of photography is lacking. Cropping and “zooming-in”, techniques that commonly are found in Caillebotte’s oeuvre, also may be the result of his interest in photography, but may just as likely be derived from his intense interest in perspective effects. A large number of Caillebotte’s works also employ a very high vantage point, including View of Rooftops (Snow) (Vue de toits (Effet de neige)) (1878), Boulevard Seen from Above (Boulevard vu d’en haut) (1880), and A Traffic Island (Un refuge, boulevard Haussmann) (1880).

Caillebotte painted many domestic and familial scenes, interiors, and portraits. Many of his paintings depict members of his family; Young Man at His Window (Jeune Homme à la fenêtre) (1875) shows René in the home on rue de Miromesnil; The Orange Trees (Les Orangers) (1878), depicts Martial Jr. and his cousin Zoë in the garden of the family property at Yerres; and Portraits in the Country (Portraits à la campagne) (1875) includes Caillebotte’s mother along with his aunt, cousin, and a family friend. There are scenes of dining, card playing, piano playing, reading, and sewing all executed in an intimate, unobtrusive manner that portrays the quiet ritual of upper-class indoor life.

His country scenes at Yerres focus on pleasure boating on the leisurely stream as well as fishing and swimming, and domestic scenes around his country home. Often, he used a soft impressionistic technique reminiscent of Renoir to convey the tranquil nature of the countryside, in sharp contrast to the flatter, smoother strokes of his urban paintings. In Oarsman in a Top Hat (1877), he effectively manages the perspective of a passenger in the back of a row boat facing his rowing companion and the stream ahead, in a manner much more realistic and involving than Manet’s Boating (1874).

Caillebotte is best known for his paintings of urban Paris, such as The Europe Bridge (Le Pont de l’Europe) (1876), and Paris Street; Rainy Day (Rue de Paris; temps de pluie, also known as La Place de l’Europe, temps de pluie) (1877). The latter is almost unique among his works for its particularly flat colors and photo-realistic effect that give the painting its distinctive and modern look, almost akin to American Realists such as Edward Hopper.

Many of his urban paintings were quite controversial due to their exaggerated, plunging perspective. In Man on a Balcony (1880), he invites the viewer to share the balcony with his subject and join in observing the scene of the city reaching into the distance, again by using unusual perspective. Showing little allegiance to any one style, many of Caillebotte’s other urban paintings produced in the same period, such as Place Saint-Augustin, Misty Weather (1877), are considerably more impressionistic.

In 1881, Caillebotte acquired a property at Petit-Gennevilliers, on the banks of the Seine near Argenteuil, and he moved there permanently in 1888. He ceased showing his work at age 34 and devoted himself to gardening and to building and racing yachts, and he spent much time with his brother, Martial, and his friend Renoir. Renoir often came to stay at Petit-Gennevilliers, and engaged in far-ranging discussions on art, politics, literature, and philosophy. Never married, Cailebotte appears to have had a serious relationship with Charlotte Berthier, a woman eleven years his junior and of the lower class, to whom he left a sizable annuity.

Caillebotte’s painting career slowed dramatically in the early 1890s, when he stopped making large canvases. Caillebotte died of pulmonary congestion while working in his garden at Petit-Gennevilliers in 1894 at age 45. He was interred at Père Lachaise Cemetery in Paris.