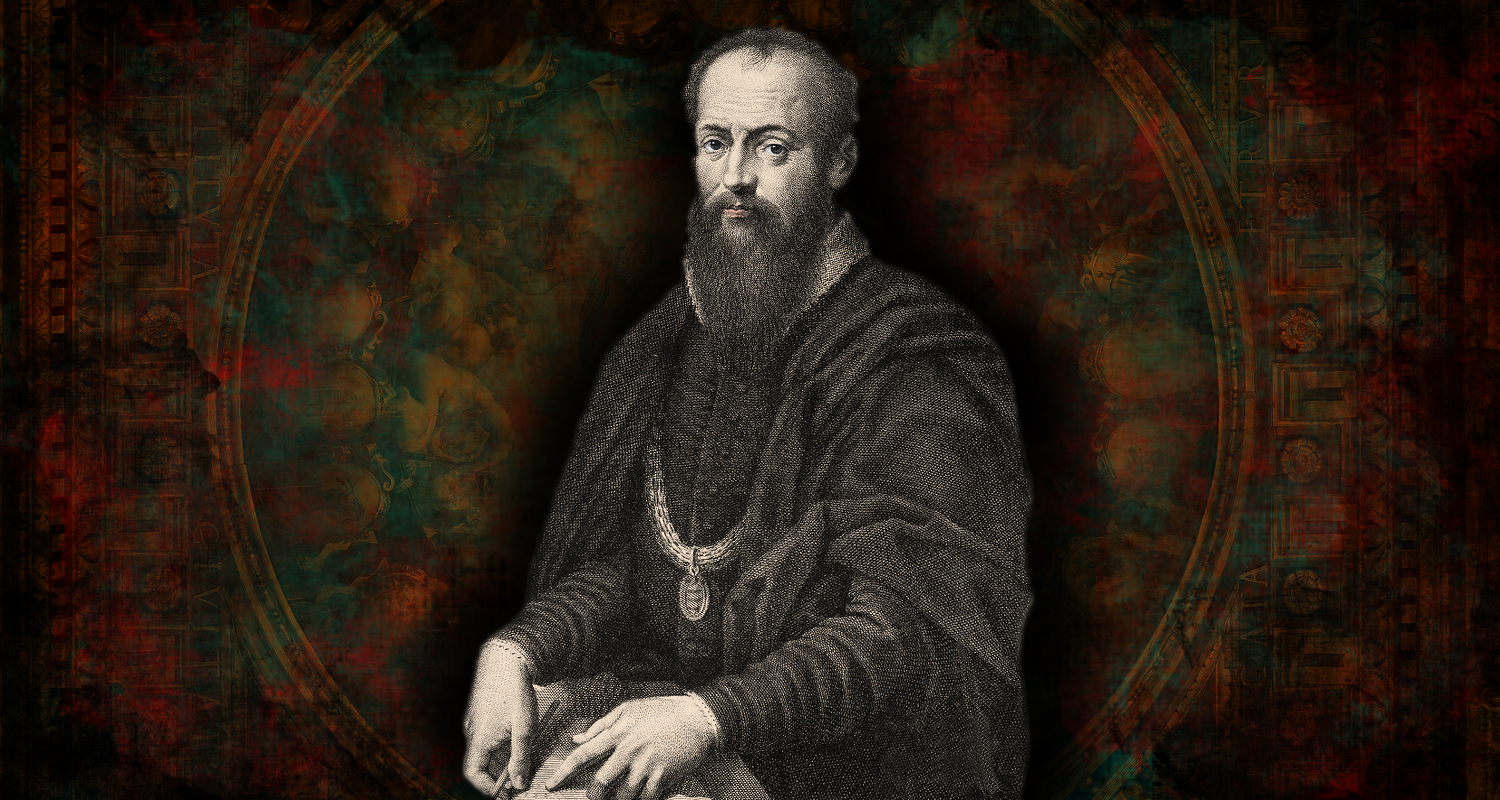 Giorgio Vasari, (July 30, 1511 — June 27, 1574) was an Italian painter, architect, and writer who is most famous today for his Lives of the Most Excellent Painters, Sculptors, and Architects, considered the ideological foundation of art-historical writing. 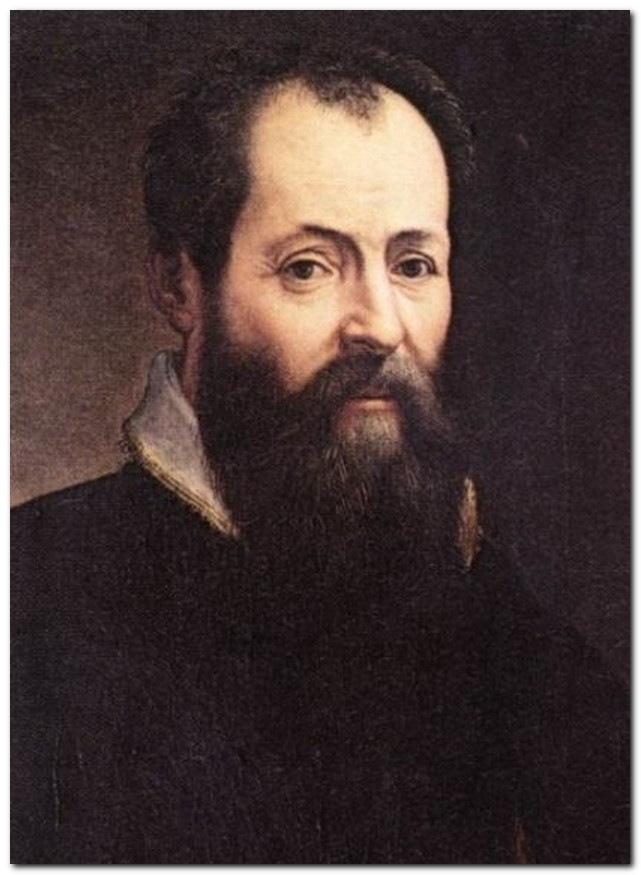 Vasari was born in Arezzo, Tuscany. Recommended at an early age by his cousin Luca Signorelli of the nearby town of Cortona, he became a pupil of Guglielmo da Marsiglia, a skillful painter of stained glass. Later, at the age of 16, his decisive training was in Florence, where he enjoyed the friendship and patronage of the powerful and influential Medici family. He was sent to Florence by Cardinal Silvio Passerini, where he studied under the tutelage of Andrea del Sarto with his fellow pupils Rosso Fiorentino and Jacopo Pontormo, where his humanist education was encouraged. He was befriended by Michelangelo whose painting style would influence his own. (Many years later, it would be Vasari that designed the tomb of Michelangelo in the church of Santa Croce, one of the most visited spots in Florence.)

When he was 19, in 1529, he visited Rome where he studied the works of Raphael and other artists of the Roman High Renaissance. In 1547 he completed the hall of the chancery in Palazzo della Cancelleria in Rome with frescoes that received the name Sala dei Cento Giorni. He was consistently employed by members of the Medici family in Florence and Rome, as well as working in Naples, Arezzo, Cortona and many others.

Many of his pictures still exist, the most important being the wall and ceiling paintings in the Sala di Cosimo I in the Palazzo Vecchio in Florence, where he and his assistants were at work from 1555, and the frescoes begun by him inside the vast cupola of the Duomo were completed by Federico Zuccari and with the help of Giovanni Balducci. He also helped to organize the decoration of the Studiolo of Francesco I, now reassembled in the Palazzo Vecchio.

In the Florentine church of Santa Croce, he was responsible for the painting of The Adoration of the Magi which was commissioned by Pope Pius V in 1566 and completed in February 1567. It was restored in 2011, before being put on exhibition in Rome and in Naples. Eventually it is planned to return it to the church of Santa Croce in Bosco Marengo (Province of Alessandria, Piedmont).

As an artist Vasari was both studious and prolific. His paintings, often produced with the help of a team of assistants (as was customary), are in the style of the Tuscan Mannerists and have been criticized in modern times as being facile, superficial, and lacking a sense of color. Contemporary scholars regard Vasari more highly as an architect than as a painter.

Aside from his career as a painter, Vasari was also successful as an architect. His loggia of the Palazzo degli Uffizi by the Arno opens up the vista at the far end of its long narrow courtyard, a unique piece of urban planning that functions as a public piazza, and which, if considered as a short street, is unique as a Renaissance street with a unified architectural treatment. The view of the Loggia from the Arno reveals that, with what is known as the Vasari Corridor, it is one of very few structures that line the river which are open to the river itself and appear to embrace the riverside environment.

He also renovated the medieval churches of Santa Maria Novella and Santa Croce. At both he removed the original rood screen and loft, and remodeled the retro-choirs. He also designed the palace created for the Cavalieri di San Stefano in Pisa. His designs from the time show the influence of Michelangelo and are outstanding examples of the Tuscan Mannerist style of architecture.

In 1562 Vasari built the octagonal dome on the Basilica of Our Lady of Humility in Pistoia, an important example of high Renaissance architecture. In Rome, Vasari worked with Giacomo Barozzi da Vignola and Bartolomeo Ammanati at Pope Julius III’s Villa Giulia.

Though a painter and architect, he is best known today as a writer, often called “the first art historian”, Vasari invented the genre of the encyclopedia of artistic biographies with his Le Vite de’ più eccellenti pittori, scultori, ed architettori (Lives of the Most Eminent Painters, Sculptors, and Architects), dedicated to Grand Duke Cosimo I de’ Medici, which was first published in 1550. He was the first to use the term “Renaissance” (rinascita) in print, though an awareness of the ongoing “rebirth” in the arts had been in the air since the time of philosopher and poet Leon Battista Alberti (1404-1472). Vasari was also responsible for our use of the term Gothic Art, though he only used the word Goth which he associated with the “barbaric” German style.

According to the historian Richard Goldthwaite, Vasari was one of the earliest authors to use the term “competition” (or “concorrenza” in Italian) in its economic sense. He used it repeatedly, and stressed the concept in his introduction to the life of Pietro Perugino, in explaining the reasons for Florentine artistic preeminence. In Vasari’s view, Florentine artists excelled because they were hungry, with that hunger fueled by their fierce competition amongst themselves for commissions. Competition, he said, is “one of the nourishments that maintain them.” The Lives was also unique in that it included a novel treatise on the technical methods employed in the arts.

The book was partly rewritten and enlarged in 1568, which added the biographies of a number of artists then living, as well as Vasari’s own autobiography, is now much better known than the first edition and has been widely translated. The work has a consistent and notorious bias in favor of Florentines, and Tuscan art in general, and tends to attribute to them all the developments in Renaissance art – for example, the invention of engraving.

Venetian art in particular (along with arts from other parts of Europe), is systematically ignored in the first edition. Between the first and second editions, Vasari visited Venice and while the second edition gave more attention to Venetian art (finally including Titian) it did so without achieving a neutral point of view.

Vasari’s writing style in The Lives is anecdotal and eminently readable. When facts were scarce, however, he did not hesitate to fill in the gaps with information of questionable veracity. His biographies are interspersed with amusing gossip. Many of his anecdotes have the ring of truth, while others are inventions or generic fictions. One such example is the tale of a young Giotto, then a student of Cimabue, painting a such a realistic fly on the surface of a painting that the older master repeatedly tried to brush away. This telling by Vasari is a genre tale that echoes anecdotes told of the Greek painter Apelles.

He did not research archives for exact dates, as modern art historians do, and naturally his biographies are most dependable for the painters of his own generation and those of the immediate past. Modern criticism – with new materials opened up by research – has corrected many of his traditional dates and attributions.

Despite these flaws, Vasari’s work in Lives represents the first grandiose example of modern historiography and has proven to be hugely influential. The canon of Italian Renaissance artists he established in the book endures as the standard to this day. Moreover, the trajectory of art history he presented has formed the conceptual basis for Renaissance scholarship and continues to influence popular perceptions of the history of Western painting.

Vasari enjoyed high repute during his lifetime and amassed a considerable fortune. In 1547, he built himself a fine house in Arezzo (now a museum honoring him), and decorated its walls and vaults with paintings. He was elected to the municipal council or priori of his native town, and finally rose to the supreme office of gonfaloniere. In 1563, he helped found the Florence Accademia e Compagnia delle Arti del Disegno, with the Grand Duke of Tuscany and Michelangelo as capi (heads) of the institution, and with 36 artists chosen as members.

In 1572, Giorgio Vasari died of unspecified causes at the age of 62, in Florence. His body was transported to his hometown of Arezzo for burial at the church of Santa Maria della Pieve. According to church records, “”…today, this day June 27, 1574, it pleased God in the Sunday morning hour of three and one half, to give rest to the soul of the happy and well lived Sir Knight Of The Golden Spur, Giorgio Vasari, famous painter and architect,  in Florence at his home in Borgo Santa Croce, and the body of which is sent to be buried in Arezzo, in the grave arranged by him in the altar chapel he built and manufactured in Pieve Collegiate Aretina.”

Later in 1865, the church was restructured and his body, along with that of other dignitaries, was taken from its original burial spot, and “and these were placed in chestnut crates …and it was built, a pit in the center of the Church, that is 13 meters from the wall of the Porta Maggiore and 4 meters from 3.a column, so that grave was located in the center of the middle aisle, and the said pit it is long and deep m.1,20 m.3.70 with parallel walls on all sides, then covered by a crawlspace and then floor. In this pit there were placed the caskets filled with the remains of the following corpses…,”  a list of names then appear, including Vasari’s.