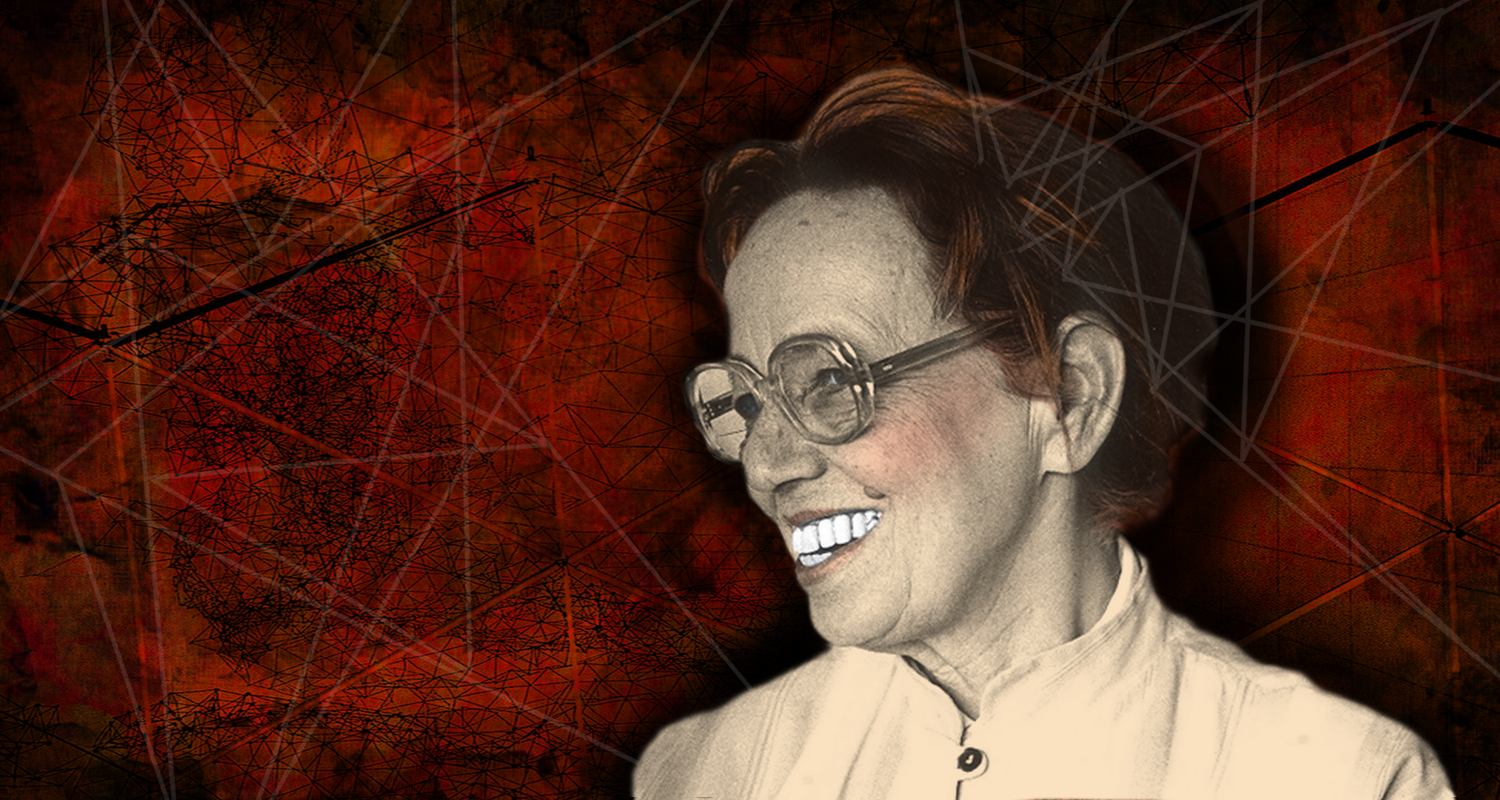 Gego (1 August 1912 – 17 September 1994) was a modern Venezuelan artist and sculptor. Her most popular works were produced in the 1960s and 1970s, during the height of popularity of Geometric abstract art and Kinetic Art. Although these genres influenced her somewhat, Gego tried to develop her own style by drawing lines in space and break from the popular art of Venezuela. 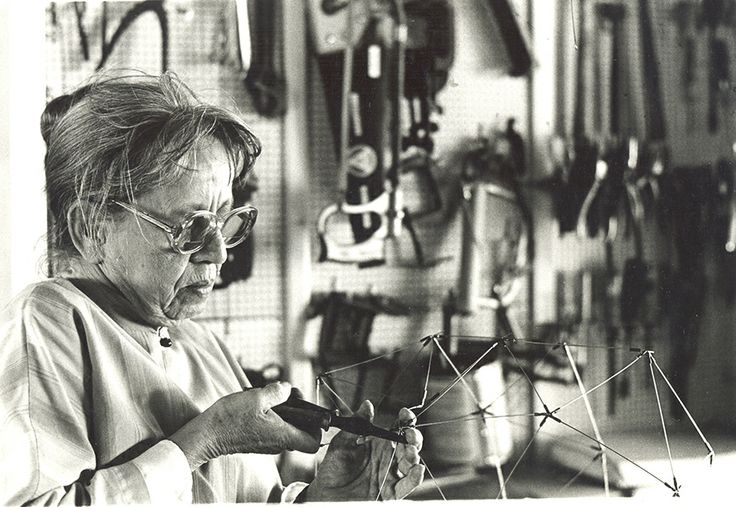 Gego was born Gertrud Louise Goldschmidt in Hamburg, Germany in 1912. Although she was the niece of the medieval art historian Adolf Goldschmidt, who taught at the University of Berlin, she decided to attend the Technische Hochschule of Stuttgart in 1932, where she was taught by popular masonry artist Dr. Paul Bonatz and in 1938 received a diploma in both architecture and engineering.

Her German citizenship was nullified in 1935, due to the fact that her family was of Jewish heritage. Four years later she moved to Venezuela, where she gained citizenship in 1952. (Years later, in 1987, Professor Frithjof Trapp of the University of Hamburg led an investigation called “Exile and Emigration of Hamburg Jews.” Gego was one of the people he had hoped to investigate, and after several letters to her home, Gego finally agreed to respond, but the letter was never mailed and instead stayed in her collection of notes. In her testimony titled ” Reflection on my origins and encounters in life” Gego describes how her family identified with German society. She described, in detail, her education history and her departure from Germany.) 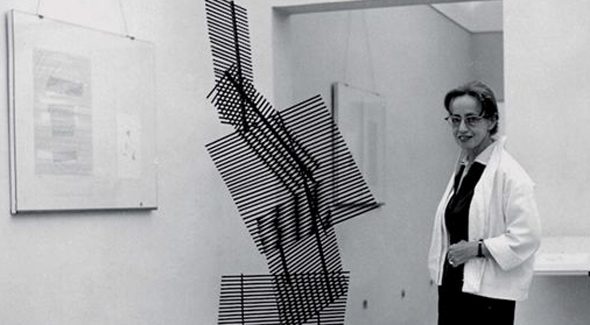 Gego met Venezuelan urban planner Ernst Gunz at the architectural firm where she worked with other architects to design the Los Caobos housing estate for the independent film maker and Venezuelan ambassador to Argentina, Luis Roche. Gego and Gunz married in October 1940, and soon opened a furniture studio called ‘Gunz’, where Gego designed lamps and wooden furniture. The couple had two children, Tomás (b. 1942) and Barbara (b. 1944). Gego closed Gunz in 1944 in order to spend more time with her children. 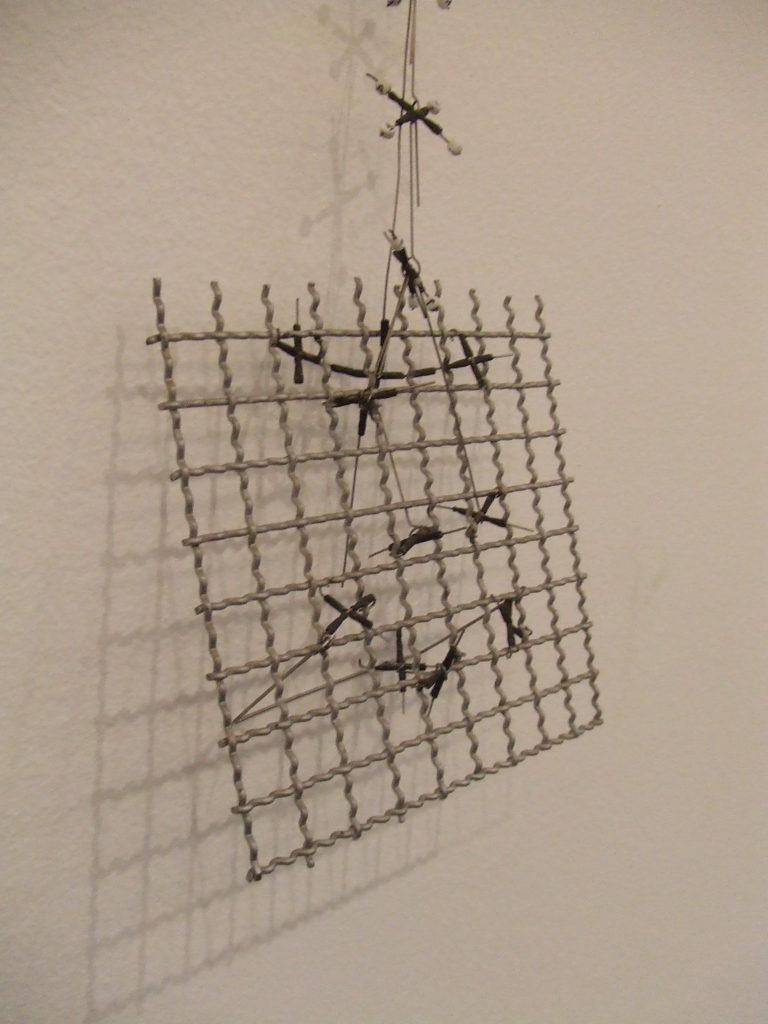 By 1948 she returned to designing private homes, nightclubs and restaurants. In 1951 she separated from Ernst Gunz, and in 1952 met artist and graphic designer Gerd Leufert. Gego and Leufert remained together for the rest of their lives. This romantic partnership coincides with the development of her artistic career. She began exhibiting her watercolors, collages, and monotypes in 1954 as well as experimenting with creating three-dimensional creations.

After moving to Caracas, Venezuela, she taught at the school of architecture of the Central University between 1958 and 1967. Additionally, between 1964 and 1977, she taught at the Neumann Institute of Design in Caracas, an institution where many other renowned artists, such as Harry Abend, also taught. She taught “Bidimensional and Three-Dimensional Form” and “Spatial Solutions” and published two articles between 1971 and 1977. 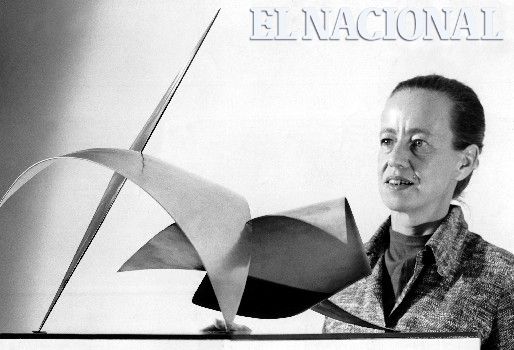 In 1947, the Venezuelan people had overthrown the dictatorial government. Gego felt that after a time of crisis, students are the members of society that are the most influential, and she believed that with her education and experience she would be a great asset to young minds. Included in her Sabiduras, a folder of her informal writings discovered upon her death, there is a letter addressed to her colleagues explaining the criteria that would be beneficial to the students of Venezuela. In it, she explains that only through experience can artists, and architects in particular, learn their medium. Images and theories about architecture would not further their artistic training. Gego’s views were fueled by her belief that students were taught with too much emphasis on rationality and were becoming “ignorant of imagination”. 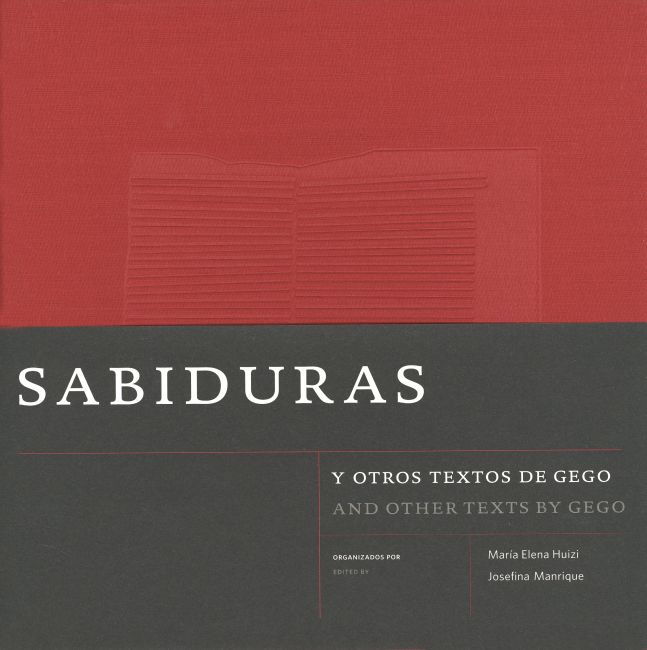 Modernism was the artistic trend sweeping through Latin America at the time, and artists in Venezuela participated enthusiastically. Modernism was a political tool as well. Latin American governments were trying to catch up to the advancements of the United States during the Post World War II era and Venezuela thought by encouraging the modern art movement, which incorporated ideas of the industry, science, and architecture, the country would be seen as progressive. In 1957, as part of this movement, Gego made her first sculpture. 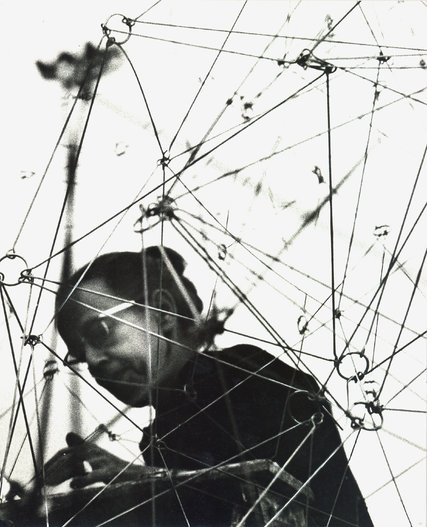 She was aware of the modern movement when she came to Caracas, but she did not want to simply co-opt the ideas of Kinetic Art, Constructivism or Geometric Abstraction. Instead, she wanted to create a style of her own because she was able to use so many aspects of her life in her art—for example, her German heritage. In the end, Gego saw that these new projects labeled desarrollista (developmentalist movement) were pleasing the elite and government, but she wanted an art that would relate to the local community of Venezuela. 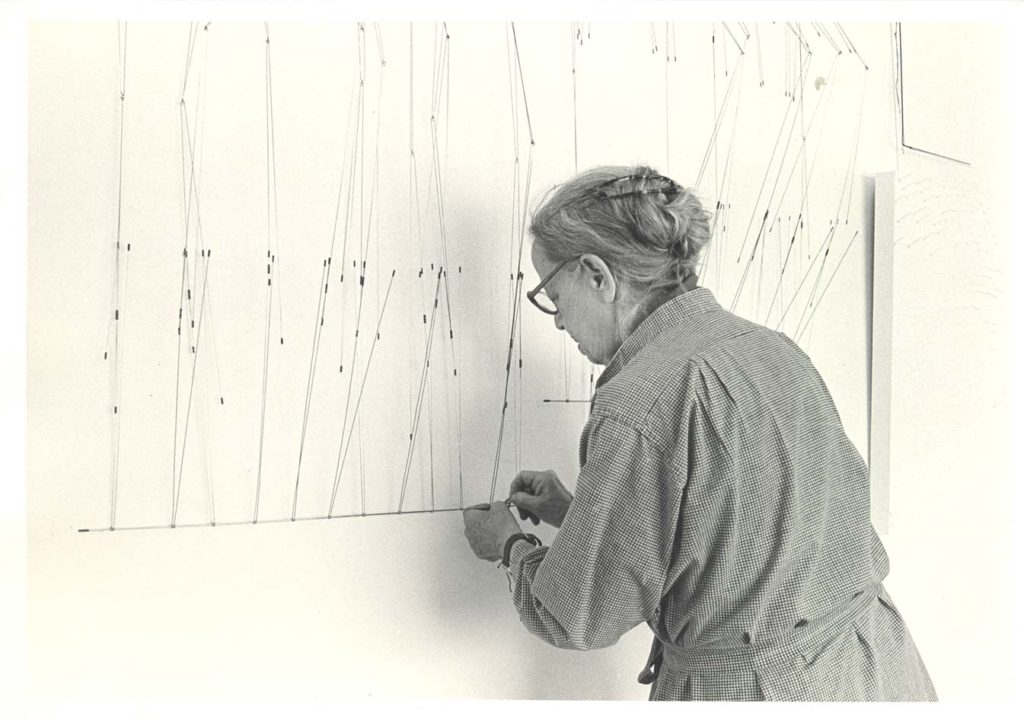 From Kinetic Art, Gego incorporated the ideas of motion as well as the importance of experimentation and the spectator. One of her earliest works, Esfera (Sphere) (1959), consists of welded brass and painted steel of different widths that are placed at different angles to one another in order to create overlapping lines and fields. When the viewer walks around the sphere, the visual relationship between the lines changes, creating a sense of motion. Esfera echoes the work done by famous Kinetic artists like Carlos Cruz-Diez and Jesus Rafael Soto. 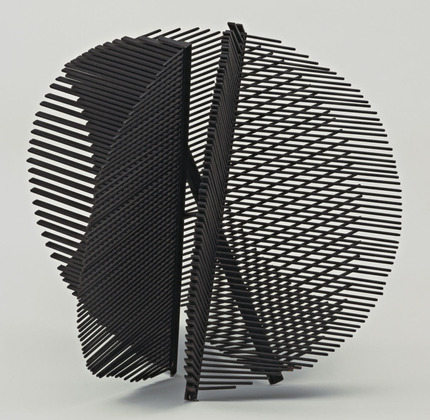 It was not until the mid-1960s that Gego departed from the basic concept of Kinetic Art in response to her developing ideas about lines. For Gego, a line inhabited its own space, and as such, it was not a component in a larger work but instead it was a work by itself. Therefore, in her artworks, she did not use line to represent an image; line is the image. 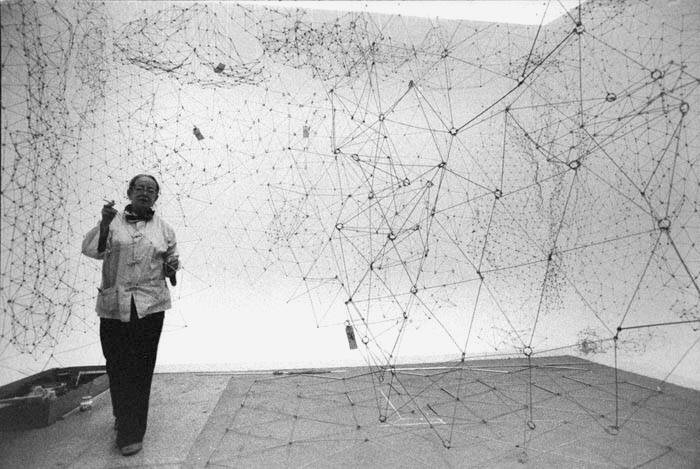 The strength or purpose of the line was enhanced by her use of different materials, such as steel, wire, lead, nylon and various metals. In addition to relating to her interest in architecture, these materials also contradicted the new modernist movement in Latin America. Gego not only used these materials to create lines in her massive sculptures but also in her series entitled Dibujos Sin Papel (Drawings without Paper). These works were created from scraps of metal that were bent and weaved together in order to evoke movement, experimentation and spontaneity, which reflect her view of space. 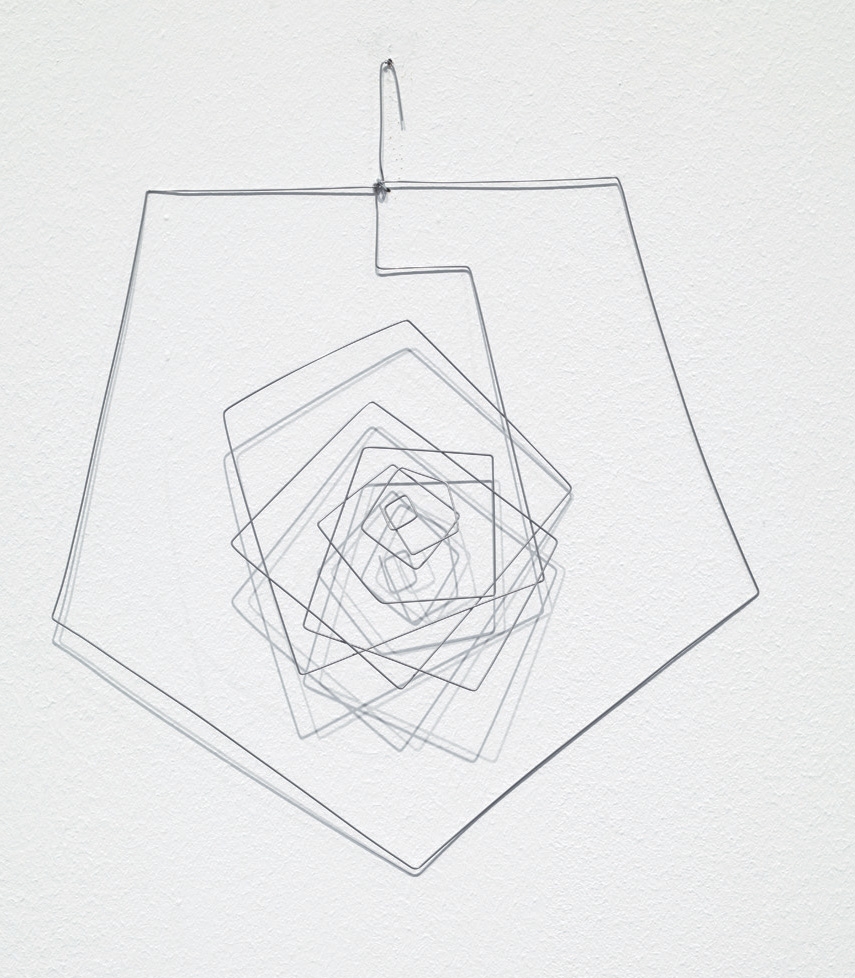 Gego considered space as its own form; as if her artwork was occupying the artwork of the room itself. Since her work is made from nets and grid-like materials, negative space is everywhere, causing the negative as well as the positive space to be appreciated. But it is the shadows created by her works that reveal the integral connection between the sculpture and the room it occupies. Gego is thus allowed to play with the idea of the stable and unstable elements of art. 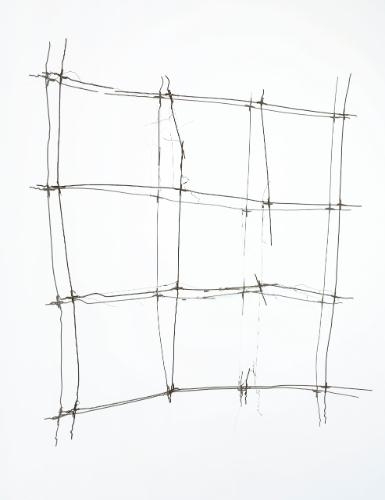 The stable elements of art is the sculpture itself, while the unstable elements consist of the constantly changing shadows and the slight movement in her design due to the fragility of her materials. In fact, the way her sculptures exist in space changes every time it was installed because Gego had the power to recreate the image as she wanted. 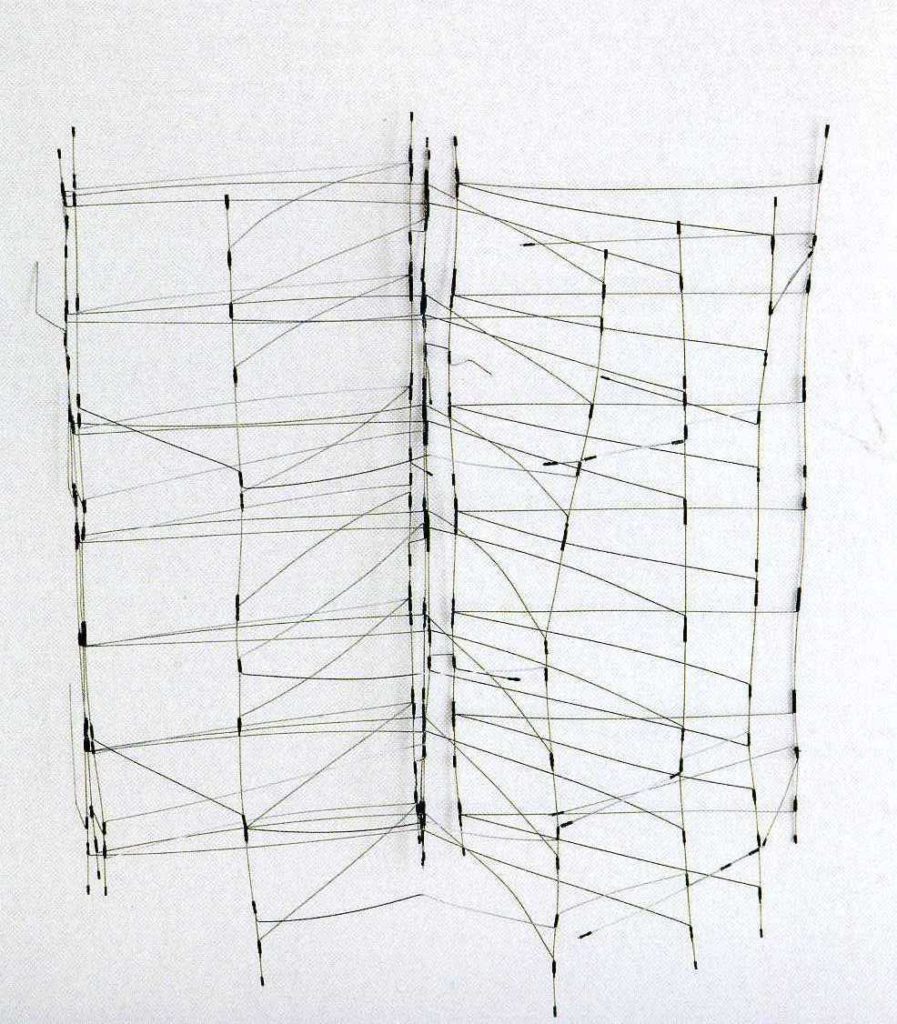 While in Los Angeles in the late 1960s, Gego composed a series of lithographs that were mostly untitled except for a ten-page booked entitled, Lines in 1966. This book is full of lithographs produced in gray and red. Variations in the thickness, length, and direction of the lines demonstrate the fundamental instability of line. By experimenting with line in a different medium, Gego emphasized that the notion of “line” retains its strength and independence regardless of its specific location or form. 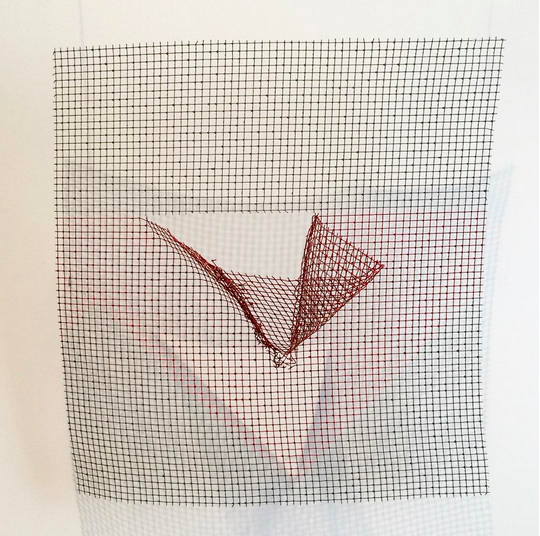 Her series of Reticuláreas is undoubtly her most popular and most talked about group of artworks. Her first series was created in 1969. Pieces of aluminum and steel were joined together to create an interweaving of nets and webs that fills the entire room when exhibited. Her use of repetition and layering in the massive structure causes the piece to seem endless. Since her death, the permanent collection of Reticuláreas is in the Galería de Arte Nacional in Caracas, Venezuela. 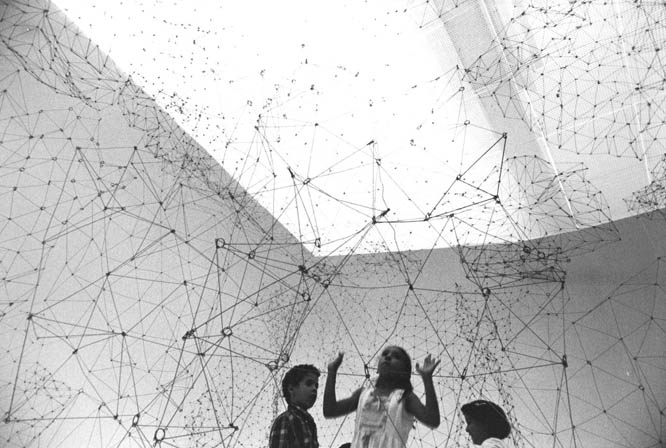 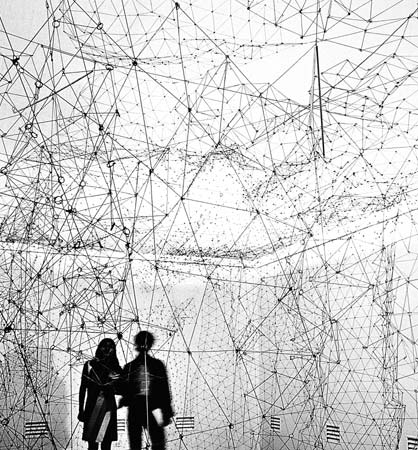 Gego passed away of unspecified causes at the age of 82, in 1994. Since her death, her children and grandchildren have taken the responsibility to preserve Gego’s legacy. That same year, they founded the Fundacion Gego to organize her artwork and to promote the awareness of their relatives contribution to the art world. the Fundacion Gego gave the permission to publish Gego’s personal writings and testimonies in 2005. 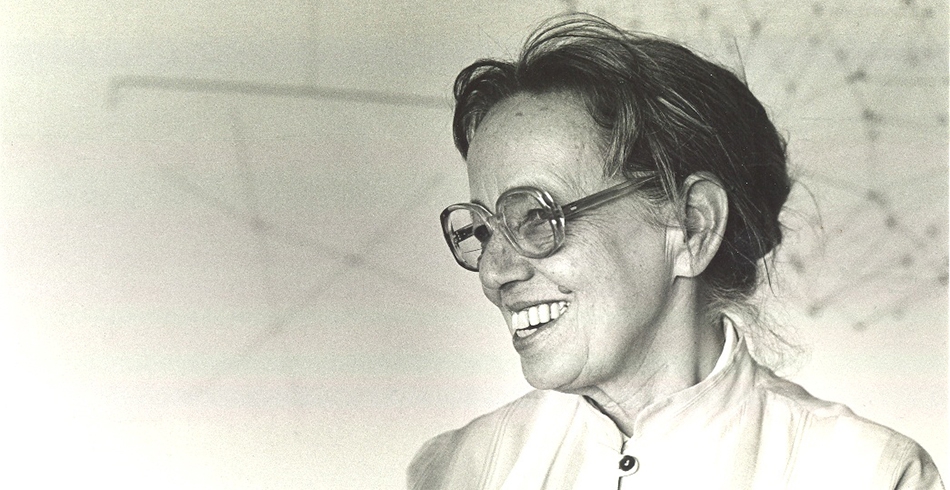