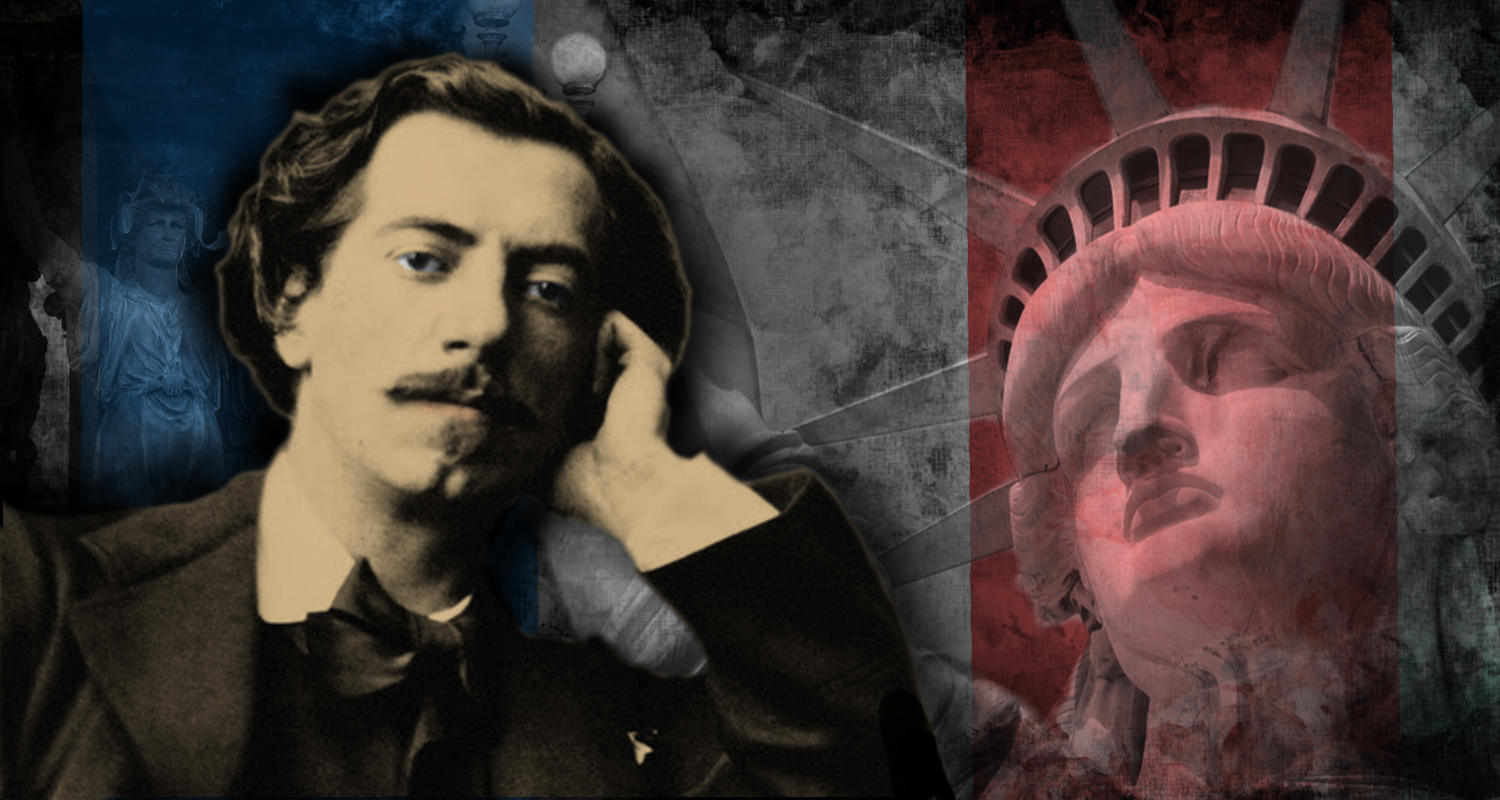 Frédéric Auguste Bartholdi (2 August 1834 – 4 October 1904) was a French sculptor who is best known for designing the Statue of Liberty. 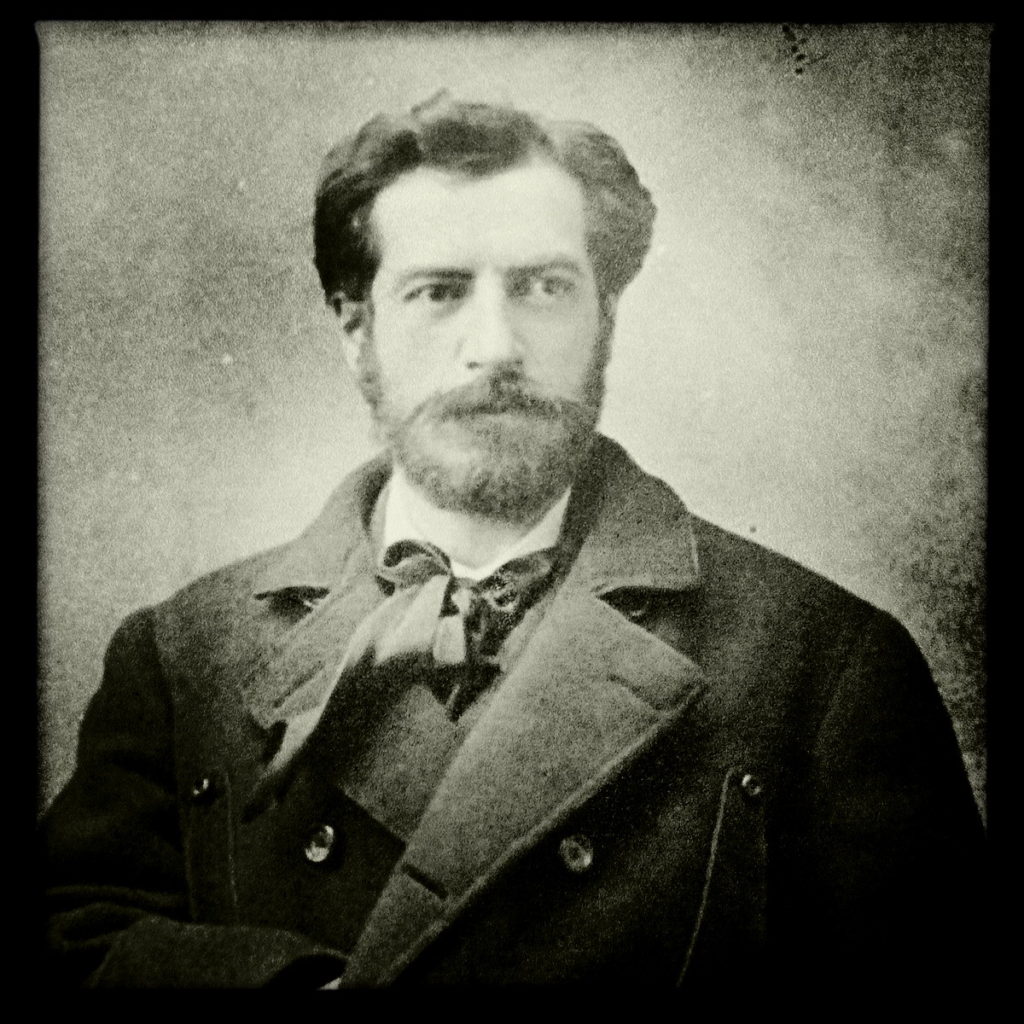 Born in Colmar, in the Haut-Rhin department of France, to Jean Charles Bartholdi (1791–1836) and Augusta Charlotte Bartholdi (née Beysser; 1801–1891), Frédéric Auguste Bartholdi was the youngest of their four children, and one of only two to survive infancy, along with the oldest brother, Jean-Charles, who became a lawyer and editor. When Bartholdi’s father died, his mother moved the family to Paris, while still maintaining ownership and visiting their house in Alsace, which later became the Bartholdi Museum. He attended the Lycee Louis-le-Grand in Paris, and received a BA in 1852. He then went on to study architecture at the École nationale supérieure des Beaux-Arts as well as painting under Ary Scheffer in his studio in the Rue Chaptal, now the Musée de la Vie Romantique. Later, Bartholdi turned his attention to sculpture, which afterward exclusively occupied him.

Bartholdi served in the Franco-Prussian War of 1870 as a squadron leader of the National Guard, and as a liaison officer to General Giuseppe Garibaldi, representing the French government and the Army of the Vosges. In 1875, he joined the Freemasons Lodge Alsace-Lorraine in Paris. In 1871, he made his first trip to the United States, to select the site for the Statue of Liberty, the creation of which would occupy him after 1875. 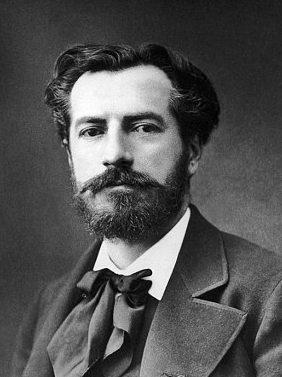 On December 15, 1875, Bartholdi married Jeanne-Emilie Baheux Puysieux in Newport, Rhode Island. They had no children.

Bartholdi was one of the French commissioners in 1876 to the Philadelphia Centennial Exposition. There he exhibited bronze statues of “The Young Vine-Grower,” “Génie Funèbre,” “Peace” and “Genius in the Grasp of Misery,” for which he received a bronze medal. 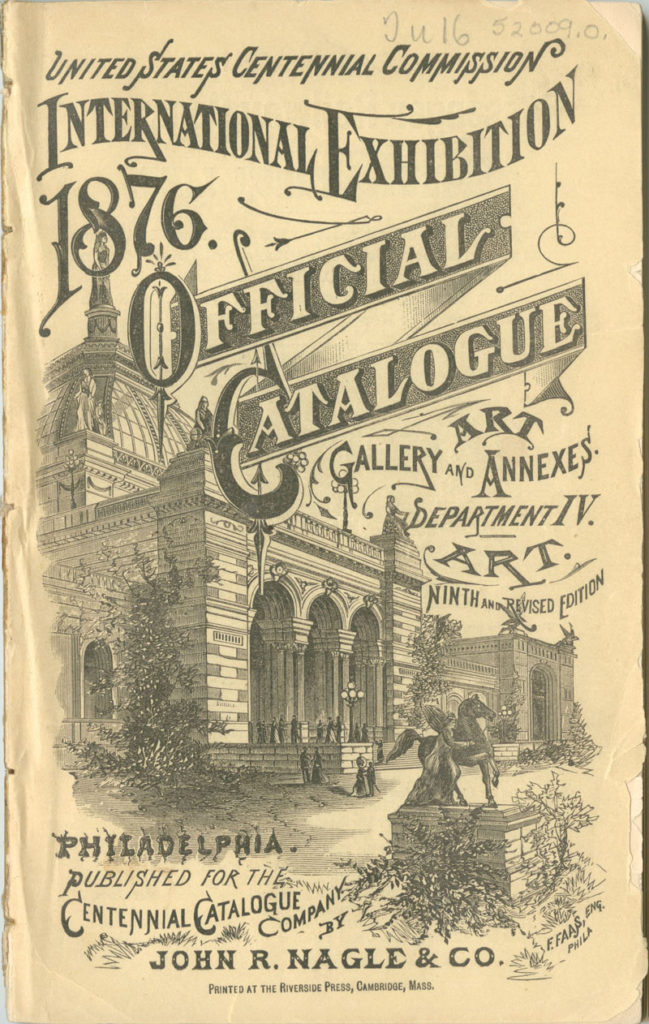 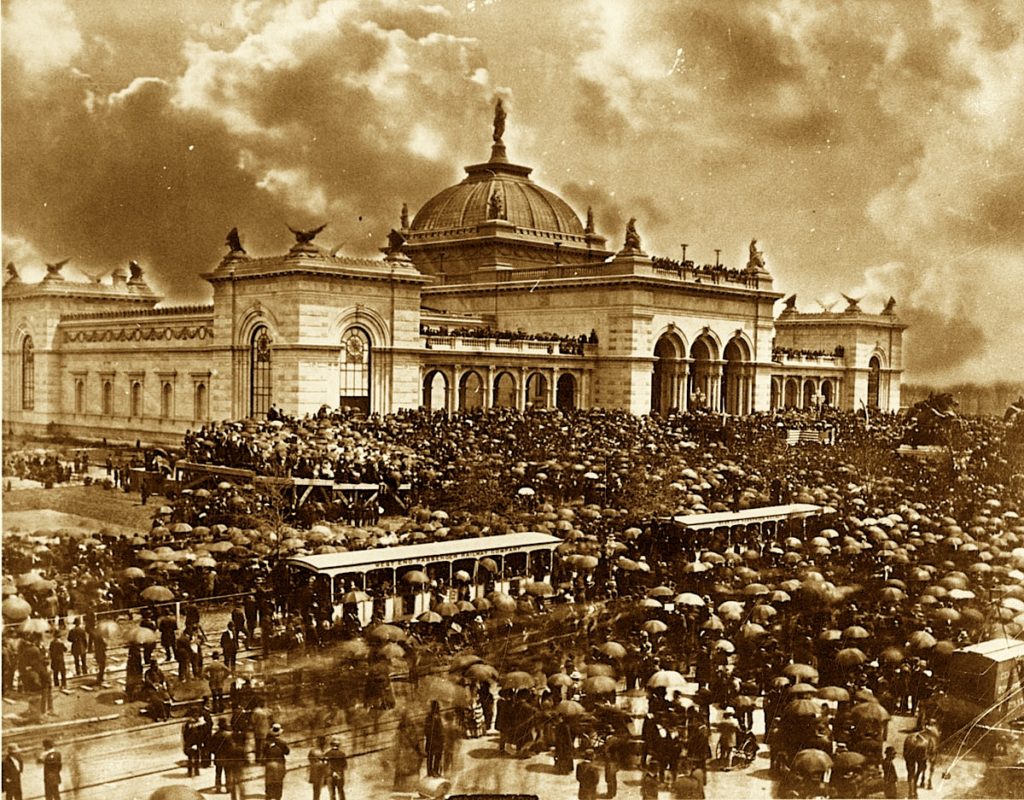 The work for which Bartholdi is most famous is Liberty Enlightening the World, better known as the Statue of Liberty.

Soon after the establishment of the French Third Republic, the project of building some suitable memorial to show the fraternal feeling existing between the republics of the United States and France was suggested, and in 1874 the Union Franco-Americaine (Franco-American Union) was established by Edouard de Laboulaye. Bartholdi’s hometown in Alsace, having first lost independence and passing under French control, had just passed into German control in the Franco-Prussian War. These troubles in his ancestral home of Alsace are purported to have further influenced Bartholdi’s own great interest in independence, liberty, and self-determination. 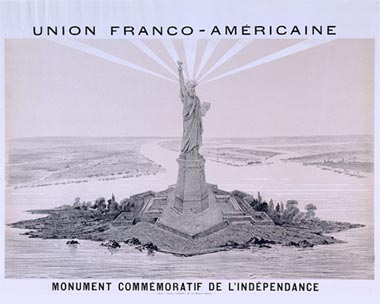 Bartholdi subsequently joined this group, with his plans for the work having been approved, the Union Franco-Americaine raised more than 1 million francs throughout France for the building of the statue.

In 1879, Bartholdi was awarded design patent U.S. Patent D11,023 for the Statue of Liberty. This patent covered the sale of small copies of the statue. Proceeds from the sale of the statues helped raise modest but insufficient money to build the full statue.

While funding for the statue continued to be a problem for years, the idea was compelling enough to survive, and finally funding was completed in some large blocs from within the Union Franco-Americane and their organized efforts with other connections.

On 4 July 1880, the statue was formally delivered to the American minister in Paris, the event being celebrated by a great banquet. 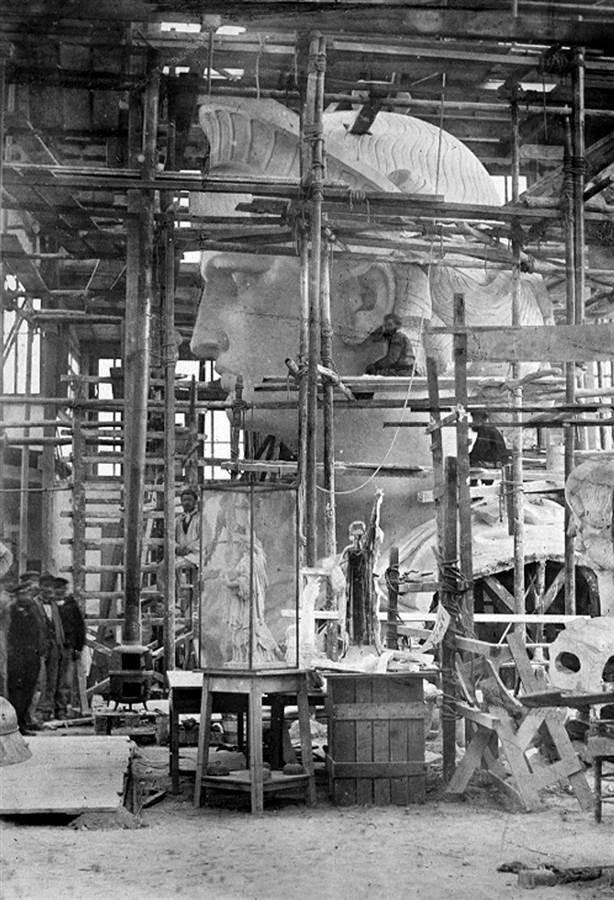 Before starting his commission, Bartholdi had traveled to the United States and personally selected Bedloe’s Island in New York Harbor as the site for the statue. The United States agreed to responsibility for funding the building of the pedestal, with about $300,000 being raised. 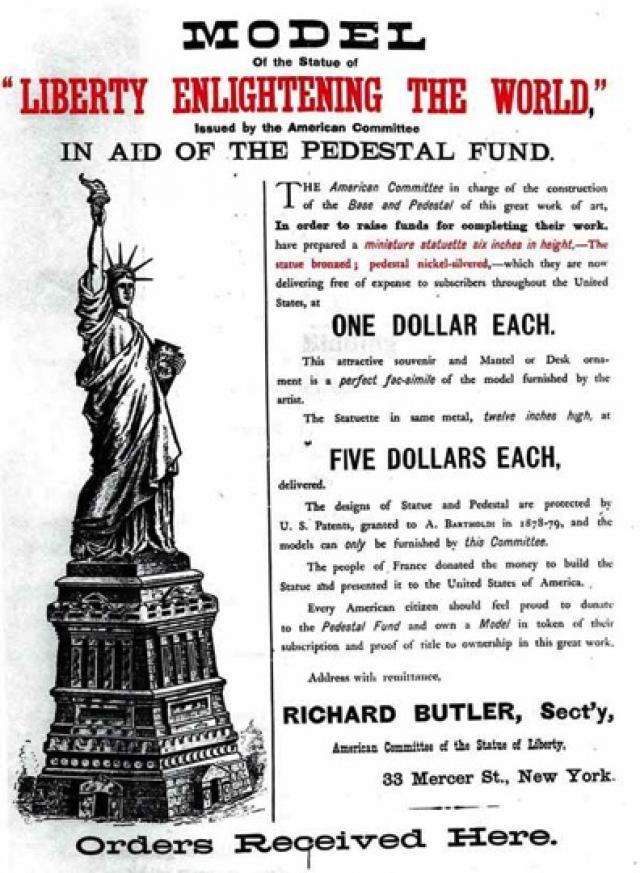 In October 1886, the structure was officially presented as the joint gift of the French and American people.

The statue is 151 feet and 1 inch high, and the top of the torch is at an elevation of 305 feet 1 inch from mean low-water mark. It was the largest work of its kind that had ever been completed up to that time, but was the tallest structure in New York City for only four years, until the New York World Building surpassed it at 349 feet in 1890.

It was rumored in France that the face of the Statue of Liberty was modeled after Bartholdi’s mother.

Bartholdi, who received the rank of Commander of the Legion of Honor in 1886, died of tuberculosis in Paris on 4 October 1904, aged 70.

Other works from Bartholdi:

Special thanks to:
Daily Artfixx, On This Day, Wikipedia, Find-A-Grave, A&E Bio, The Smithsonian American Art Museum Renwick Gallery, Famous Birthdays, Encyclopedia Brittanica, and all the art history buffs that keep the internet full of wonderful information and images.