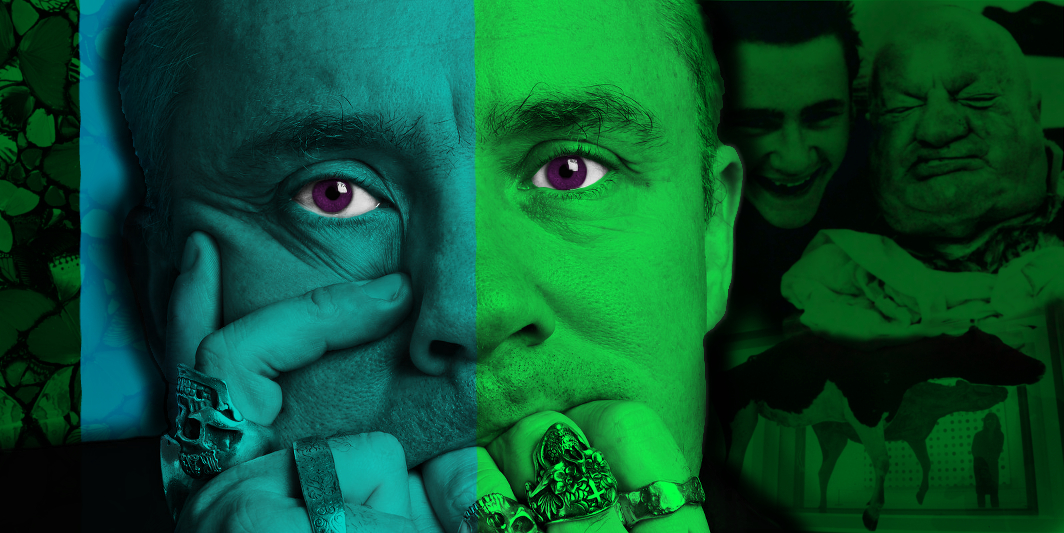 A successful and controversial artist, Damien Hirst was born in Bristol, England, on June 7, 1965. He emerged as a leading figure in the Young British Artists movement in the late 1980s and 1990s. His works, which include dead animal displays and spin-art paintings, have sold for exceptionally high prices. He is one of the wealthiest artists living today.

Raised Catholic, he grew up in Leeds. His early religion education would later factor into his artwork. He showed an interest in the grisly and gruesome aspects of life early on. His mother would later describe him as a morbid child.

As a teenager, he enjoyed looking at illustrated pathology books, fascinated by the images of disease and injury. He also showed an interest in drawing, a passion his mother supported. His father, a car mechanic, left the family when he was only 12 years old.

He occasionally got into trouble as teenager, and was caught shoplifting twice. Despite his sometimes wild behavior, he made his way to college. He studied art at the Goldsmith’s College at the University of London. While there, he put together a ground-breaking exhibit entitled “Freeze” in 1988. The show featured the works of Fiona Rae, Sarah Lucas, and others, as well as his own.

Hirst and his fellow students became part of an emerging movement known as the Young British Artists. They were known for their unusual materials and for their challenging art concepts. One of his early works, “With Dead Head,” illustrates his interest in death and shaking up the art establishment. In the photograph the artist, with a huge grin on his face, poses next to a severed head in a morgue.

While not everyone was enthralled with his work, he received support from Charles Saatchi, advertising titan and art collector. Saatchi lent financial assistance to Hirst, and also started collecting his pieces which also advanced the artist’s reputation. Saatchi bought two of the young artist’s medicine cabinet sculptures, which one critic later said constituted “a constellation of still lifes that express and reflect the human body as a field of vulnerabilities and of hopeful medical interventions.”

In 1991, Hirst had his first solo exhibition at the Woodstock Street Gallery in London. He also participated in the Young British Artists show at the Saatchi Gallery the following year. There he displayed “The Physical Impossibility of Death in the Mind of Someone Living,” a 14-foot-long glass tank with a shark preserved in formaldehyde. The shark had been bought from an Australian fisherman.

He continued to set the art world on fire with his work at the 1993 Venice Bienniale, a renowned international art exhibition. There he showed “Mother and Child Divided,” an installation piece that featured a bisected cow and her calf displayed in four vitrines, or glass cases, filled with formaldehyde. With his controversial and sometimes gruesome works, he soon became one of the best known artists in Britain. He won the prestigious Turner Prize in 1995. “It’s amazing what you can do with an E in A-Level art, a twisted imagination and a chainsaw,” Hirst said in his acceptance speech.

Even though his career was thriving, not every exhibit went as planned. He wanted to bring rotting cattle for an exhibit in New York City in 1995, but he was stopped by the city’s health authorities. However, he enjoyed a warm welcome the following year with a show at New York’s Gagosian Gallery.

In addition to his glass tank works, he has made paintings and sculptures. He explored his interest in the pharmacological age with such canvases as “Controlled Substances Key Painting” (1994). The work was part of a series known as spot paintings, but Hirst only painted a few of them. He had other artists carry out his visions, much like myriad other successful artists have done over the centuries.

In addition to being a creative visionary, Hirst has proved to be a savvy businessman. He has parlayed his fame and notoriety into an art empire, becoming one of the wealthiest living artists today. Some compare him to Jasper Johns and Jeff Koons in his ability to command huge prices for his works.

As he continued to push the boundaries of art, in 2007 he unveiled “For the Love of God,” a glittering, diamond-encrusted skull made of platinum. Many critics were less than impressed with this “celebration against death,” as the artist described. Others marveled at the anticipated selling price of $100 million. Though no one initially bought the piece, it was later bought by a group that included Hirst and London’s White Cube gallery.

In 2008, he side-stepped his usual galleries to auction his work directly to the public. The auction, called “Beautiful Inside My Head Forever,” was held at Sotheby’s in London and brought in roughly $198 million. He has also done well through selling prints and other items bearing some of his signature styles and images through his company, Other Criteria.

In 2009, Hirst exhibited a group of paintings, No Love Lost, Blue Paintings, which provoked the ire of many critics who labeled the pieces “dull” and “amateurish.” Many of these works drew inspiration from one of his favorite artists, Frances Bacon, which led to some unfavorable comparisons.

A step in his quest for making art more accessible, Hirst launched his own skateboard line in 2011.

Today, Hirst shows no signs of slowing down. He participates in exhibits around the world, and in November of 2015, Hirst opened his own gallery in London, the Newport Street Gallery.  The gallery presents exhibitions of work drawn from Hirst’s art collection, such as John Hoyland and Jeff Koons. Housed within a renovated Victorian scenery-painting studio in Vauxhall, south London, admission to the gallery is free.