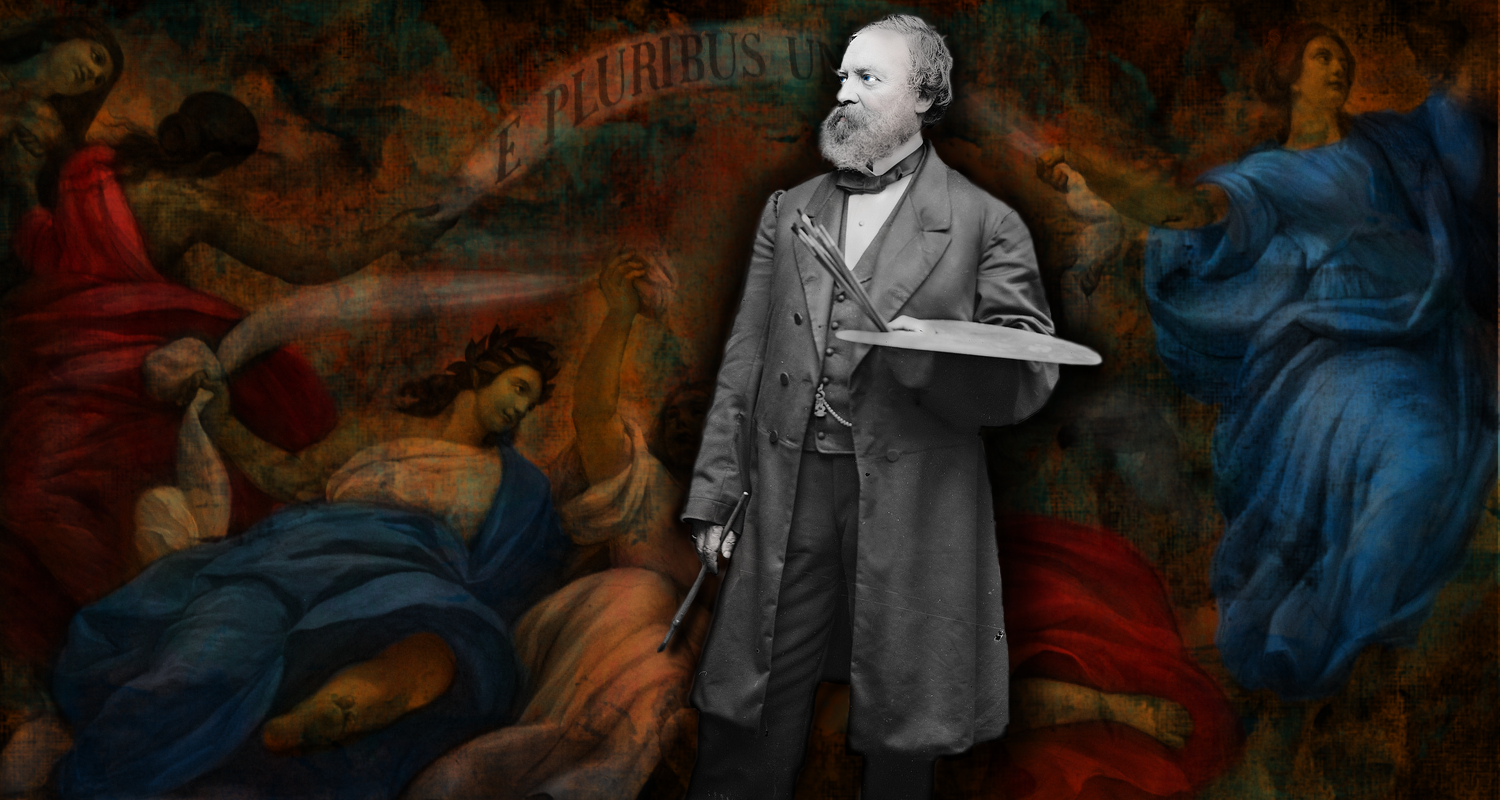 Constantino Brumidi (July 26, 1805 – February 19, 1880) was a Greek-Italian-American historical painter, best known and honored for his fresco work in the Capitol Building in Washington, DC. 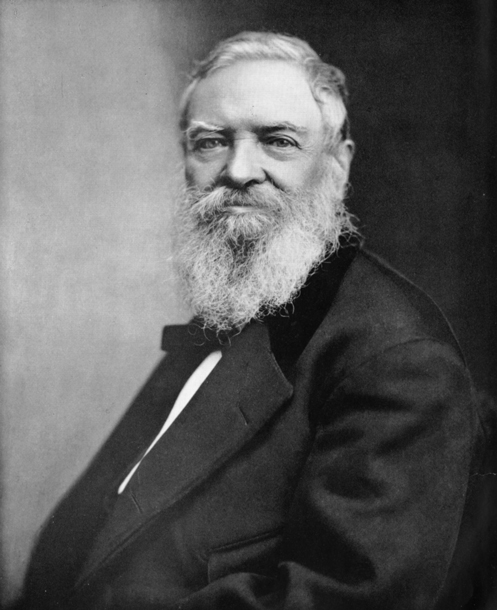 Brumidi was born in Rome, Italy, to his Italian mother and his Greek father, who had emigrated from Filiatra in the province of Messinia, Greece. He showed his talent for fresco painting at an early age and painted in several Roman palaces, among them being that of Prince Torlonia. Under Gregory XVI he worked for three years in the Vatican.

Though a proud member of the short-lived “New Roman Republic,” the occupation of Rome by French forces in 1849 apparently persuaded Brumidi to leave his beloved country. He sailed for the United States that same year, where he became a naturalized citizen in 1852. First taking up residence in New York City, the artist painted a number of portraits to earn a living. Subsequently, he undertook more important works, the principal being a fresco of the Crucifixion in St. Stephen’s Church, for which he also executed a Martyrdom of St. Stephen and an Assumption of Mary. He also executed frescoes at Taylor’s Chapel, Baltimore, Maryland.

In 1854 Brumidi went to Mexico, where he painted an allegorical representation of the Holy Trinity in the Mexico City cathedral. On his way back to New York he stopped at Washington D.C. and visited the Capitol. Impressed with the opportunity for decoration presented by its vast interior wall spaces, he offered his services for that purpose to Quartermaster General Montgomery C. Meigs. This offer was accepted, albeit allegedly reluctantly as Meigs did not trust the wandering artist to commit to finishing the work. As it turned out, Meigs was quite wrong and from the time he was hired, Brumidi worked tirelessly on the Capitol decor until his death in 1880.

His first art work in the Capitol Building was in the meeting room of the House Committee on Agriculture. At first he received eight dollars a day, which Jefferson Davis, then Secretary of War of the United States, helped increase to ten dollars.

His work attracting much favorable attention, he was given further commissions, and gradually settled into the position of a Government painter. His chief work in Washington was done in the rotunda of the Capitol and included the Apotheosis of George Washington in the dome and the Frieze of American History, which contains allegorical scenes from American history.

His work in the rotunda was left unfinished at his death, but he had decorated many other sections of the building, most notably hallways in the Senate side of the Capitol now known as the Brumidi Corridors.

Brumidi’s Liberty and Union paintings are mounted near the ceiling of the White House entrance hall.

A Brumidi fresco appears behind the altar in St. Ignatius Church in Baltimore, Maryland. Another, of Saint Aloysius Gonzaga receiving communion from Saint Charles Borromeo, hangs over the high altar of St Aloysius Church in Washington, D.C.

Despite his acclaim and notable work, Brumidi died in near poverty in Washington, D.C., and was interred in an unmarked grave at Glenwood Cemetery. The location of Brumidi’s grave, as well as the artist himself, were basically forgotten for 72 years. However, thanks to one great fan of his work, he and his place in history were rescued from obscurity. 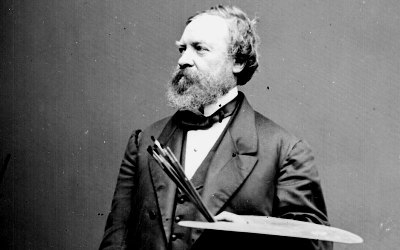 Myrtle Cheney Murdock launched a campaign to resurrect the reputation of Constantino Brumidi in 1936. As the wife of a freshman Congressman from Arizona, Mrs. Murdock was struck by the beauty of the frescoes painted on the walls and ceilings of the U.S. Capitol. After enquiring about the artist to no avail, Myrtle Cheney Murdock began to research the life and art of Brumidi. Eventually, Mrs. Murdock became the Capitol’s resident expert on Brumidi, and was employed as a Capitol guide until her death. She published six books on the Capitol building, one of which, Brumidi, Michelangelo of the Capitol, deals exclusively with the life and work of Constantino Brumidi. This book, published in 1950, depicts a dashing and romantic artist striving to portray his conception of liberty and freedom. Mrs. Murdock writes,”Everything about this man in long black cape and close fitting beret betokened pride and triumph in achievement– the tense erectness of the body, the tilt of the head, the glow of the cheek.” Her treatment of Brumidi is frequently fawning and never critical.

Mrs. Murdock’s crusade to revive the memory of Brumidi culminated in Congressional recognition of his gravesite. On February 19, 1952, a bronze marker was set in place at the formerly unmarked grave discovered through Murdock’s research. 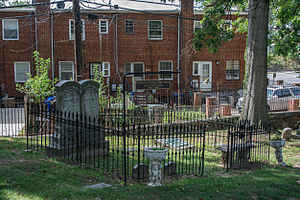 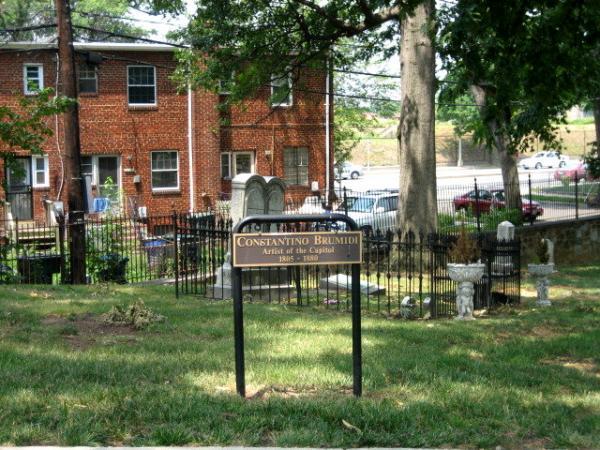 At this time, the President of Italy presented Myrtle Cheney Murdock with the Order of the Star of Italian Solidarity for her work “in the cause of the cultural relations between the two countries of which the work of the Italian artist, Brumidi, is a brilliant example.”

For the rest of her life, Myrtle Cheney Murdock worked in the U.S. Capitol building as a Brumidi expert and official guide. She also travelled for speaking engagements on the topics of “From Congressional Wife to Capitol Guide,” “The Capitol Building of the United States,” and “Constantino Brumidi, Michelangelo of the United States Capitol.”

On June 10, 2008, Congress passed, and on September 1, 2008, President George W. Bush signed, Public Law 110-59 (122 Stat. 2430), which posthumously awarded the Congressional Gold Medal to Constantino Brumidi, now  displayed in the Capitol Visitor Center, as part of an exhibit honoring him. 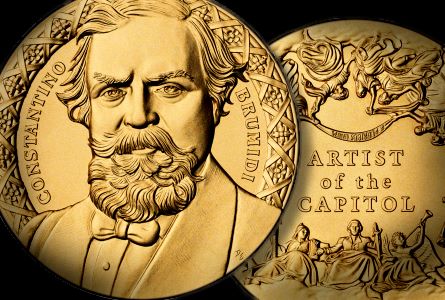