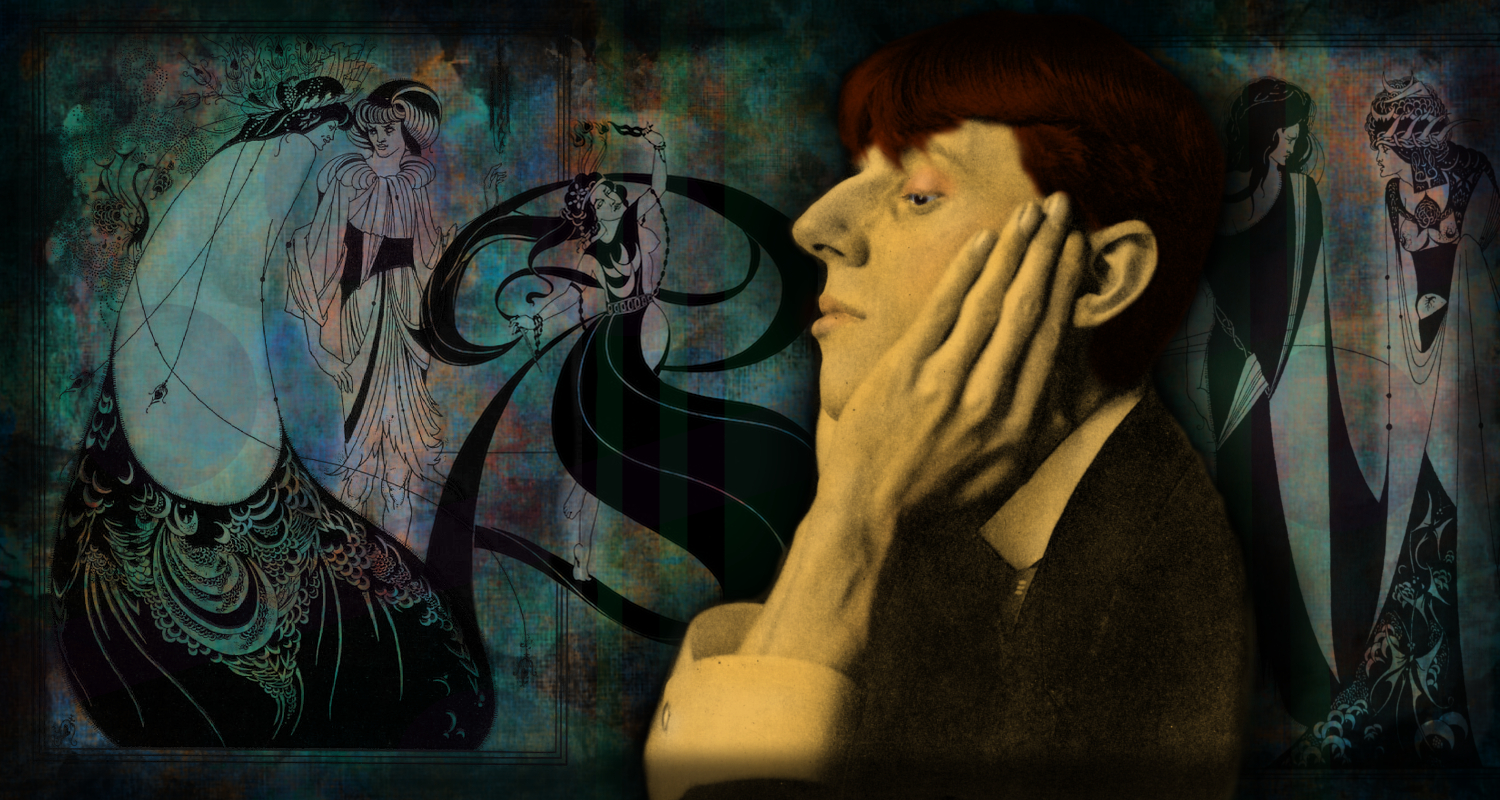 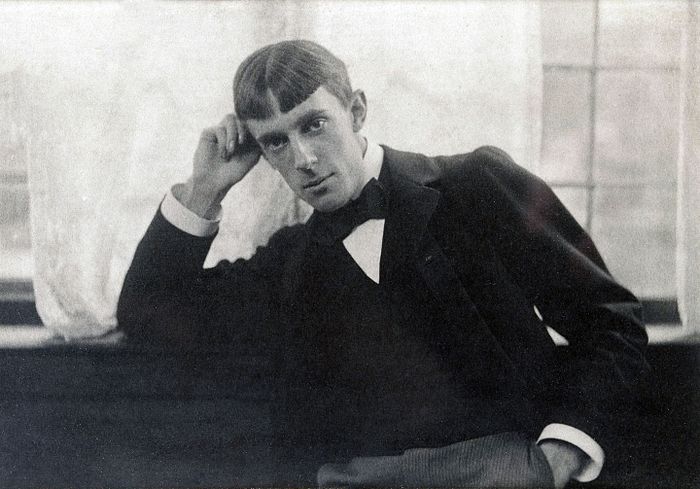 Aubrey Vincent Beardsley was born in Brighton, England, on 21 August 1872, and christened on 24 October 1872. His father, Vincent Paul Beardsley (1839–1909), was the son of a tradesman, but had no trade himself and relied on a private income from an inheritance that he received from his maternal grandfather when he was 21. Vincent’s wife, Ellen Agnus Pitt (1846–1932), was the daughter of Surgeon-Major William Pitt of the Indian Army. The Pitts were a well-established and respected family in Brighton, and Beardsley’s mother married a man of lesser social status than might have been expected. He had one sister, Mabel who was one year older.

In 1883 his family settled in London, and in the following year he appeared in public at 9 years old as an “infant musical phenomenon”, playing at several concerts with his sister. In January 1885 he began to attend Brighton, Hove and Sussex Grammar School, where he would spend the next four years. His first poems, drawings and cartoons appeared in print in “Past and Present”, the school’s magazine.

In 1888 he obtained a post in an architect’s office, and afterwards one in the Guardian Life and Fire Insurance Company. In 1891 however, he took up art as his profession, thanks to the advice and encouragement of the Pre-Raphaelite painter Sir Edward Burne-Jones, as well as the co-founder and president of the Société Nationale des Beaux-Arts, Pierre Puvis de Chavannes. In 1892 he attended the classes at the Westminster School of Art, then under Professor Fred Brown.

In 1892, Beardsley travelled to Paris, where he discovered the poster art of Henri de Toulouse-Lautrec, and the Parisian fashion for Japanese prints, both of which would be major influences on his own style. Beardsley’s first commission in 1893 was quite a spectacular one, illustrating Le Morte d’Arthur by Thomas Malory, for the publishing house J. M. Dent and Company. 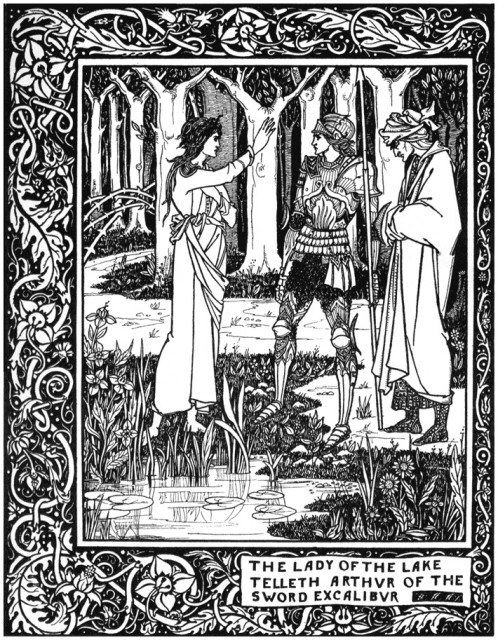 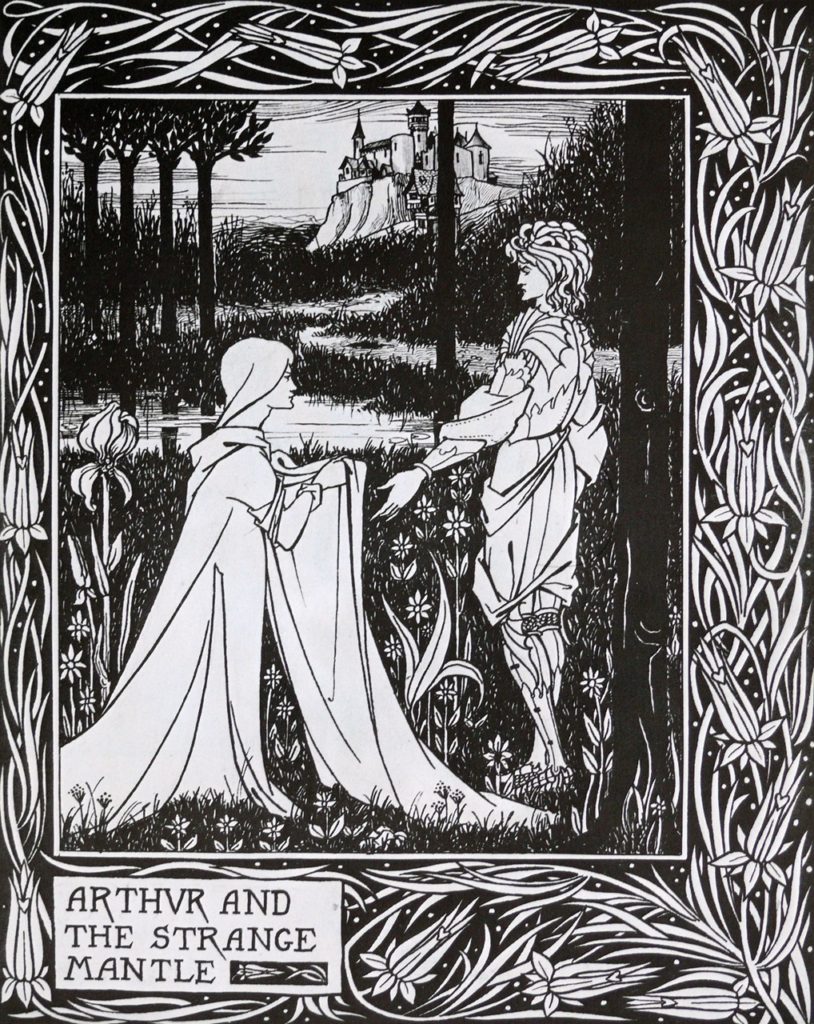 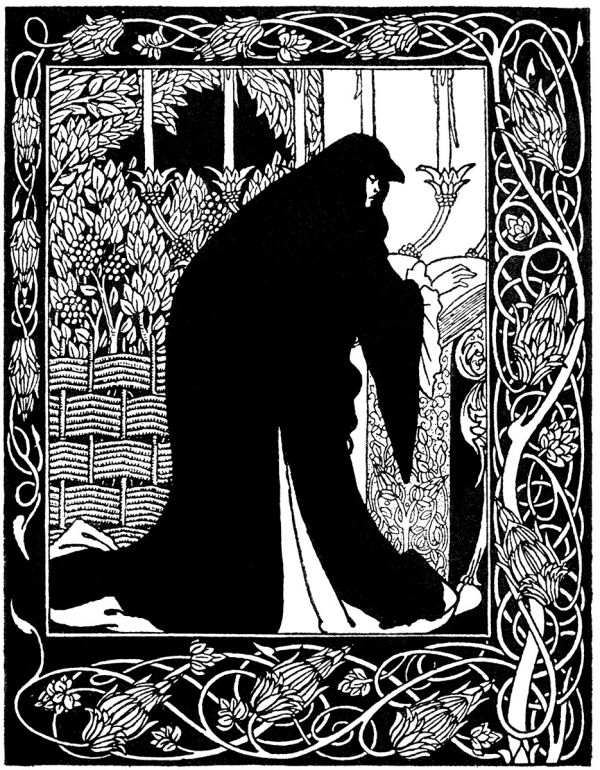 His six years of major creative output can be divided into several periods, identified by the form of his signature. In the early period his work is mostly unsigned. During 1891 and 1892 he progressed to using his initials, A.V.B. In mid-1892, the period of Le Morte d’Arthur and The Bon Mots he used a Japanese-influenced mark which became progressively more graceful, sometimes accompanied by “A.B.” in block capitals. 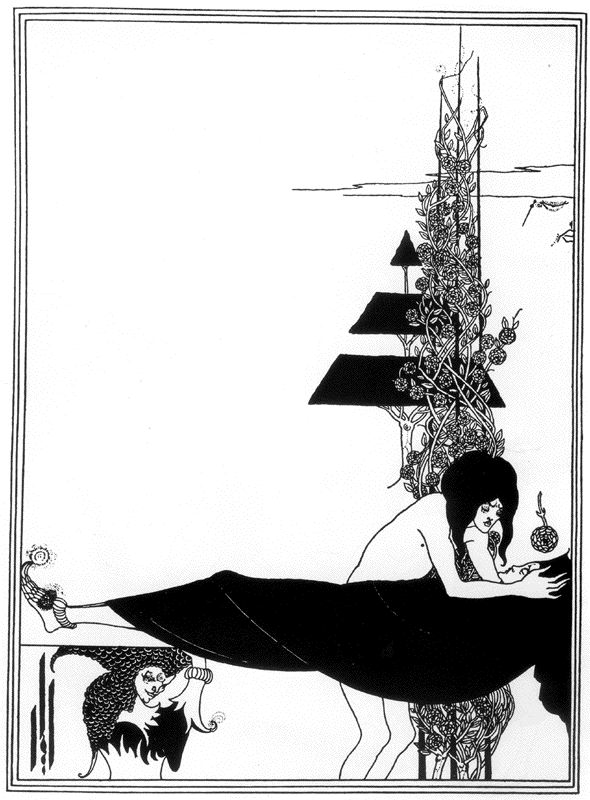 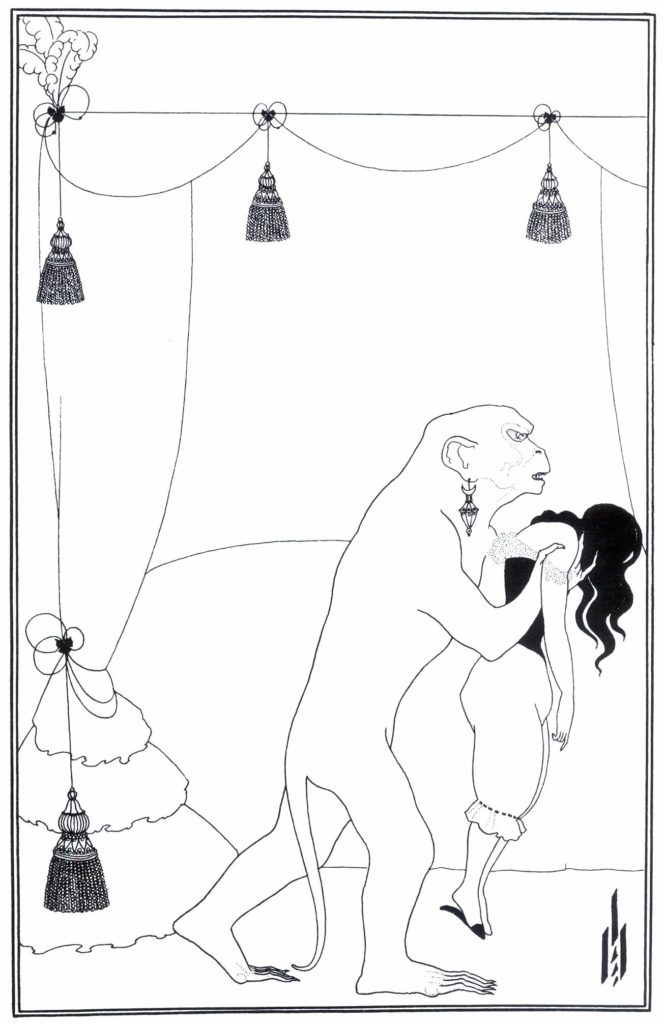 He co-founded the quarterly literary periodical, “The Yellow Book,” with American writer Henry Harland, and for the first four editions he served as Art Editor and produced the cover designs and many illustrations for the magazine. He was closely aligned with Aestheticism, the British counterpart of Decadence and Symbolism. Most of his images are done in ink, and feature large dark areas contrasted with large blank ones, and areas of fine detail contrasted with areas with none at all. 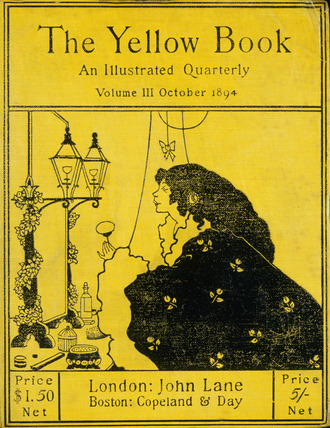 He ended up being dismissed from “The Yellow Book” due to his friendship with Oscar Wilde and the general revulsion against Aestheticism that followed the scandal surrounding Wilde’s arrest in 1895. Following his dismissal from the magazine, Beardsley then became principal illustrator of another new magazine, “The Savoy.” 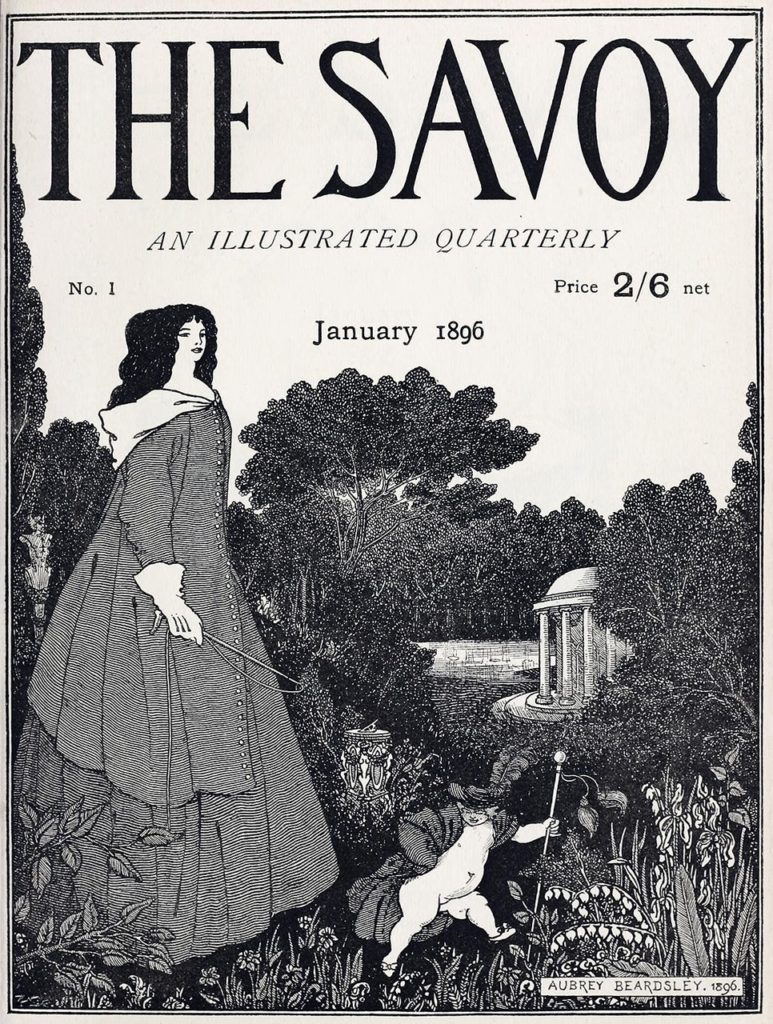 He also illustrated numerous books, including in 1896 Alexander Pope’s Rape of the Lock. It was also during this time that he wrote several poems and a prose parody, Under the Hill (1903; the original, unexpurgated version, The Story of Venus and Tannhauser, appeared in 1907). He also completed and had published the collection, A Book of Fifty Drawings by Aubrey Beardsley (1897). 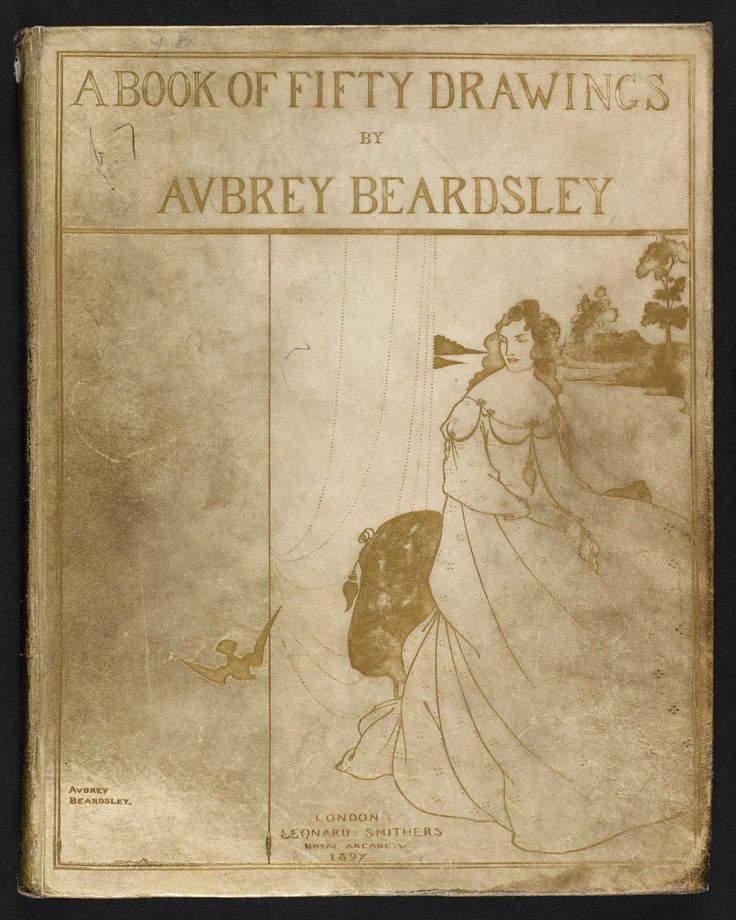 Beardsley is often considered the most controversial artist of the Art Nouveau era, renowned for his dark and perverse images and grotesque erotica, which were the main themes of his later work. His illustrations were in black and white, against a white background. Some of his drawings, inspired by Japanese shunga artwork, featured enormous genitalia. 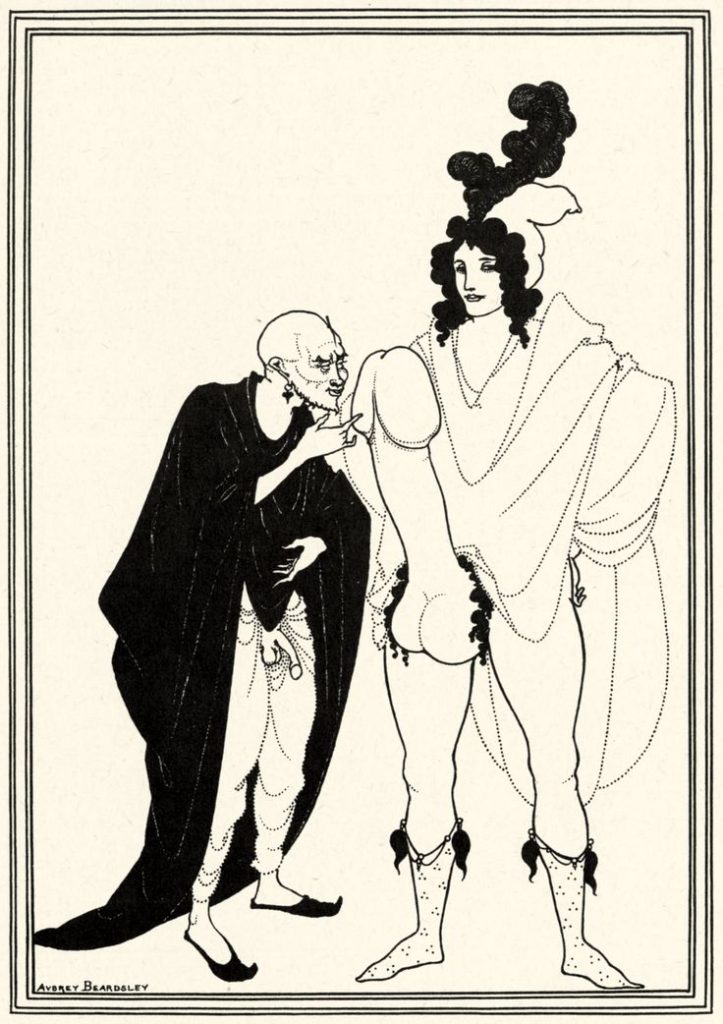 He is also very well known for his drawings for Oscar Wilde’s play Salome, which was first published in Paris in 1896, but has been in reprint ever since. 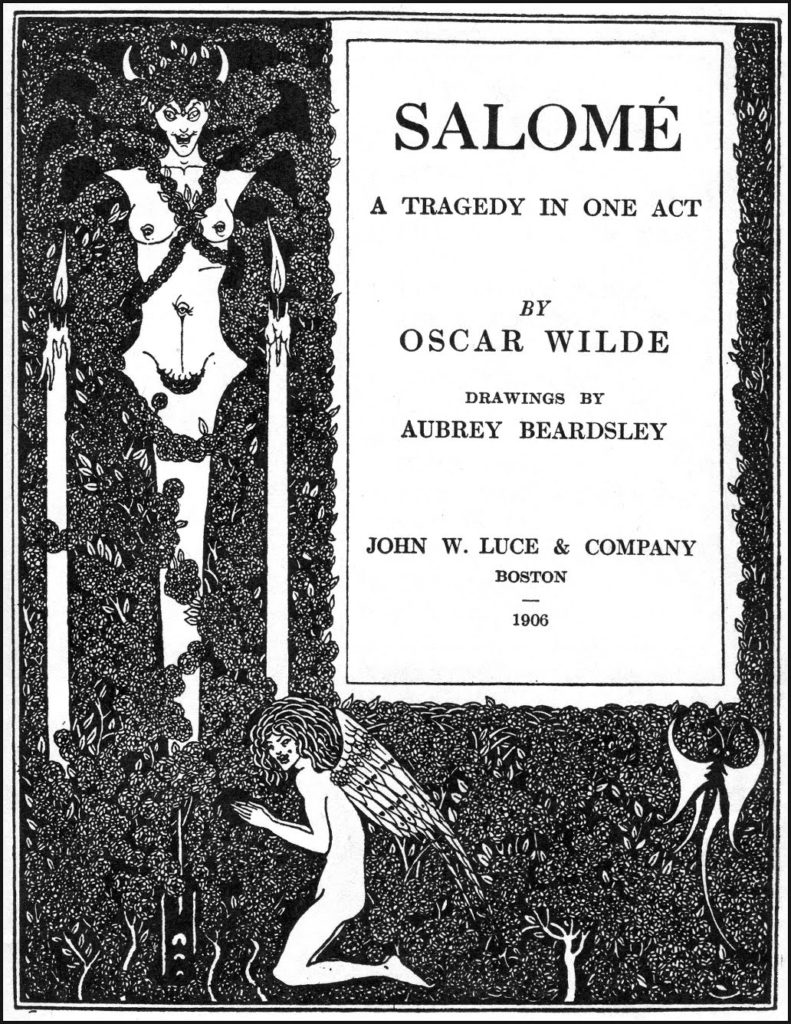 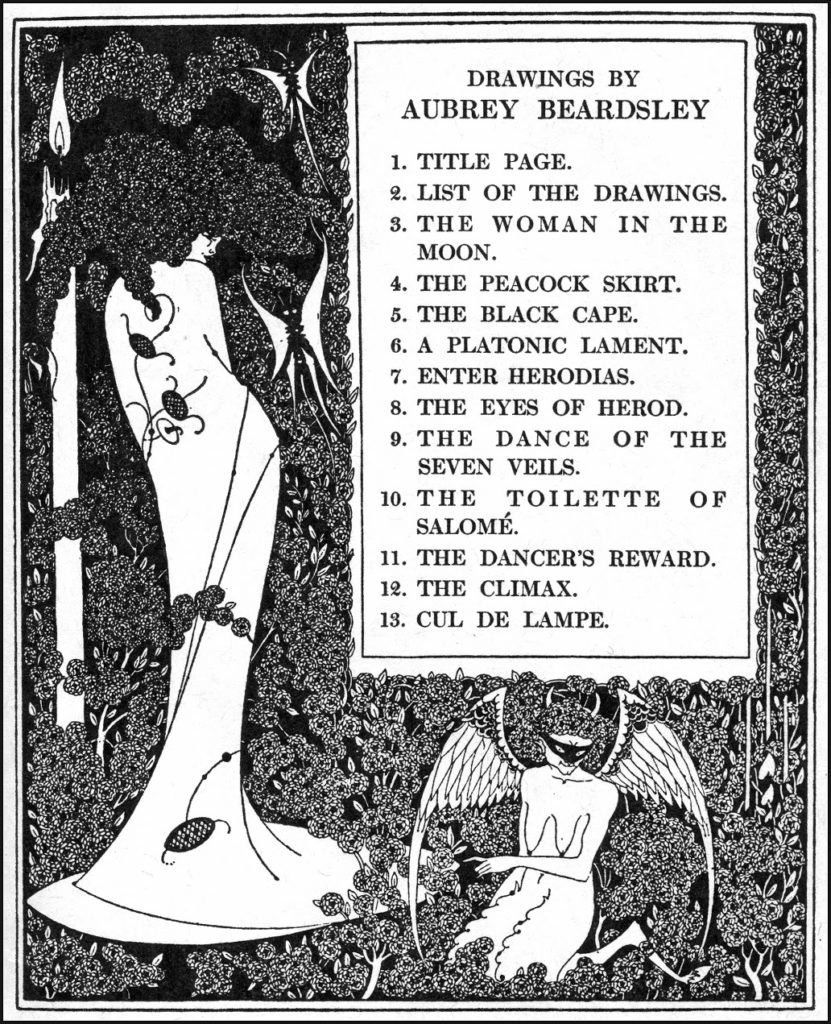 Beardsley was a caricaturist and did some political cartoons, mirroring Wilde’s irreverent wit in art. Beardsley’s work reflected the decadence of his era and his influence was enormous, clearly visible in the work of the French Symbolists, the Poster art Movement of the 1890s and the work of many later-period Art Nouveau artists. 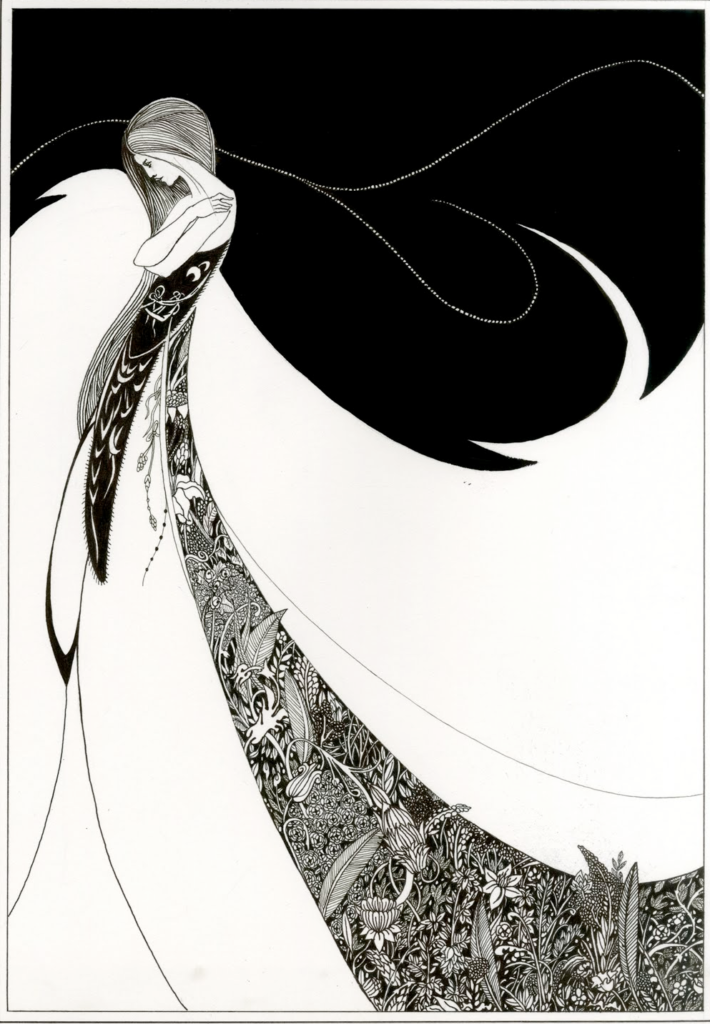 Beardsley was a well known to be quite eccentric, privately but also in public. He said, “I have one aim—the grotesque. If I am not grotesque I am nothing.” Oscar Wilde said of him that he had “a face like a silver hatchet, and grass green hair.” 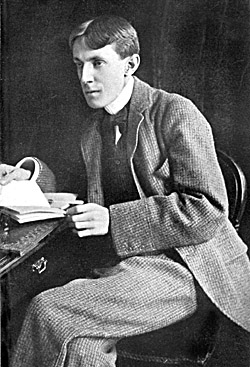 Beardsley was obsessively meticulous about his attire: dove-grey suits, hats, ties; yellow gloves were his casual attire. He would also do things like appear at his publisher’s in a morning coat and patent leather pumps (a formal men’s shoe in the late 1800’s, not the women’s footwear what we call “pumps” today).
Although Beardsley was associated with the homosexual clique that included Oscar Wilde and other English aesthetes, the details of his sexuality remain in question. He was generally regarded as asexual, but with the flamboyant “dandies” of the day, he certainly felt most at ease in style and personal freedom of expression.

Delicate in health from the age of six, throughout his entire career, Beardsley had recurrent attacks of tuberculosis. He suffered frequent lung hemorrhages and was often unable to work or leave his home. From 1896 his health had declined to such a point that he was left an invalid.

Perhaps because of his progressing illness (and his mother’s influence), Beardsley converted to Roman Catholicism in March 1897, and subsequently begged his publisher, Leonard Smithers, to “destroy all copies of Lysistrata and bad drawings… by all that is holy all obscene drawings.” Smithers ignored the artist’s wishes, and actually continued to sell reproductions as well as forgeries of his work long after Beardsley’s untimely demise . 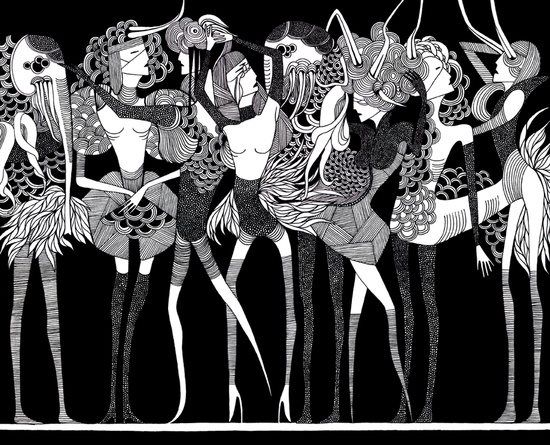 Later in 1897 his deteriorating health prompted his move to the town on Menton on the French Riviera, where he died a year later on 16 March 1898 at the Cosmopolitan Hotel, due to complications of tuberculosis. He was attended by his mother and sister. Following a Requiem Mass in Menton Cathedral the following day, his remains were interred in the cathedral’s adjacent cemetery. 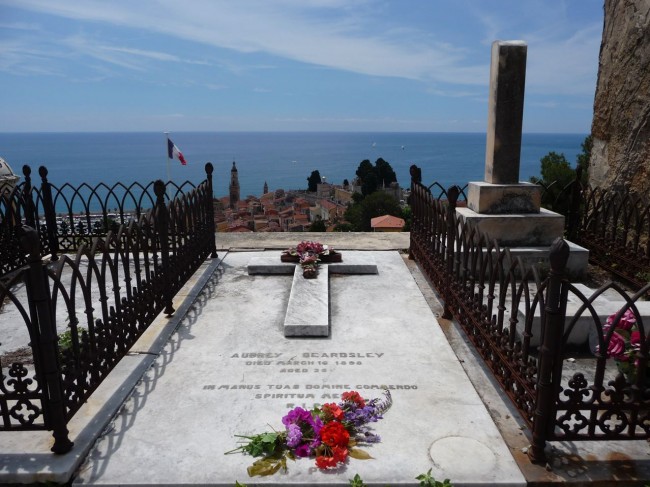