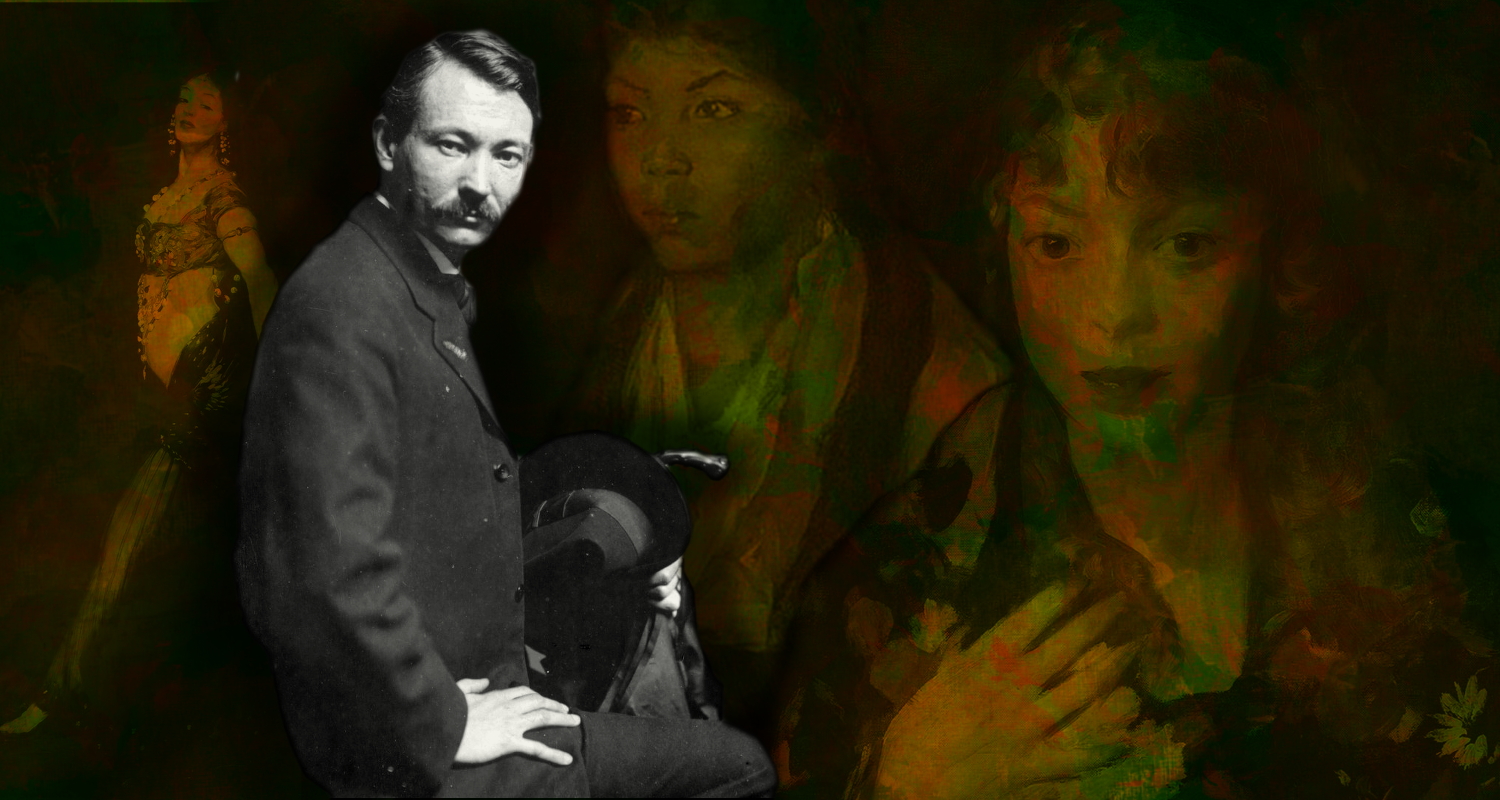 Robert Henri (June 24, 1865 – July 12, 1929) was an American painter and teacher. He was a leading figure of the Ashcan School of American realism and an organizer of the group known as “The Eight,” a loose association of artists who protested the restrictive exhibition practices of the powerful, conservative National Academy of Design.

Robert Henri (a distant cousin of Mary Cassat) was born Robert Henry Cozad in Cincinnati, Ohio, his mother was Theresa Gatewood Cozad, and his father, John Jackson Cozad, was a gambler and real estate developer. In 1871, Henri’s father founded the town of Cozaddale, Ohio. In 1873, the family moved west to Nebraska, where John J. Cozad founded the town of Cozad. In October 1882, Henri’s father became embroiled in a dispute with a rancher, Alfred Pearson, over the right to pasture cattle on land claimed by the family. When the dispute turned physical, Cozad shot Pearson fatally with a pistol. Cozad was eventually cleared of wrongdoing, but the mood of the town turned against him. He fled to Denver, Colorado, and the rest of the family followed shortly afterwards. In order to disassociate themselves from the scandal, family members changed their names. The father became known as Richard Henry Lee, and his sons posed as adopted children under the names Frank Southern and Robert Earl Henri (pronounced “hen rye”). In 1883, the family moved to New York City, then to Atlantic City, New Jersey, where the young artist completed his first paintings. 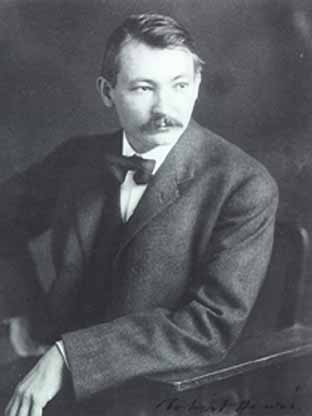 He was admitted into the École des Beaux Arts in Paris, and during his time there, he visited Brittany and Italy. At the end of 1891, he returned to Philadelphia, studying under Robert Vonnoh at the Pennsylvania Academy. In 1892, he began teaching at the Philadelphia School of Design for Women. A born teacher, Henry enjoyed immediate success at the school. 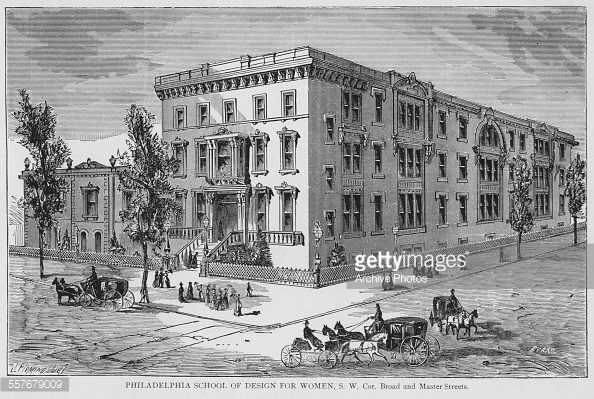 In Philadelphia, Henri began to attract a group of followers who met in his studio to discuss art and culture, including several illustrators for the Philadelphia Press who would become known as the “Philadelphia Four”: William Glackens, George Luks, Everett Shinn, and John Sloan. They called themselves the Charcoal Club. Their gatherings featured life drawing, raucous socializing, and readings and discussions of Ralph Waldo Emerson, Walt Whitman, Émile Zola, Henry David Thoreau and other literary stars of the day.

By 1895, Henri had come to reconsider his earlier love of Impressionism, calling it a “new academicism.” He was urging his friends and proteges to create a new, more realistic art that would speak directly to their own time and experience. He believed that it was the right moment for American painters to seek out fresh, less genteel subjects in the modern American city. The paintings by Henri, Sloan, Glackens, Luks, Shinn, and others of their acquaintance that were inspired by this outlook eventually came to be called the Ashcan School of American Art. They spurned academic painting and Impressionism as an art of mere surfaces. Art critic Robert Hughes declared that, “Henri wanted art to be akin to journalism. He wanted paint to be as real as mud, as the clods of horse-shit and snow, that froze on Broadway in the winter, as real a human product as sweat, carrying the unsuppressed smell of human life.” Ashcan painters began to attract public attention in the same decade in which muckraking journalists were calling attention to slum conditions.

For several years, Henri divided his time between Philadelphia and Paris, where he met the Canadian artist James Wilson Morrice. Morrice introduced Henri to the practice of painting pochades (small sketches or studies done in paint) on tiny wood panels that could be carried in a coat pocket along with a small kit of brushes and oil. This method facilitated the kind of spontaneous depictions of urban scenes which would come to be associated with his mature style.

In 1898, Henri married Linda Craige, a student from his private art class. The couple spent the next two years on an extended honeymoon in France, during which time Henri prepared canvases to submit to the Salon. In 1899 he exhibited Woman in Manteau and La Neige (The Snow), which was purchased by the French government for display in the Musée du Luxembourg.

He began teaching at the New York School of Art in 1902, where his students included Joseph Stella, Edward Hopper, George Bellows, Stuart Davis, and others that would go on to achieve fame.

In 1905, Linda, long in poor health, died. Three years later, Henri remarried; his new wife, Marjorie Organ, was a twenty-two-year-old cartoonist for the New York Journal. Henri’s 1911 portrait of Marjorie, The Masquerade Dress, is one of his most famous paintings and hangs in the permanent collection of the Metropolitan Museum of Art.

In 1906, Henri was elected to the National Academy of Design, but when painters in his circle were rejected for the Academy’s 1907 exhibition, he accused fellow jurors of bias and walked off the jury, resolving to organize a show of his own. He would later refer to the Academy as “a cemetery of art.”

In 1908, Henri was one of the organizers of a landmark show entitled “The Eight” (after the eight painters displaying their works) at the Macbeth Galleries in New York. Besides his own works and those produced by the “Philadelphia Four” (who had followed Henri to New York by this time), three other artists who painted in a different, less realistic style — Maurice Prendergast, Ernest Lawson, and Arthur B. Davies—were included. The exhibition was intended as a protest against the exhibition policies and narrowness of taste of the National Academy of Design. The show later traveled to several cities from Newark to Chicago, prompting further discussion in the press about the revolt against academic art and the new ideas about acceptable subject matter in painting.

Henri was, by this point, at the heart of the group who argued for the depiction of urban life at its toughest and most exuberant. Conservative tastes were necessarily affronted. About Henri’s Salome of 1909, critic Hughes observed: “Her long legs thrust out with strutting sexual arrogance and glint through the over-brushed back veil. It has far more oomph than hundreds of virginal, genteel muses, painted by American academics. He has given it urgency with slashing brush marks and strong tonal contrasts. He’s learned from Winslow Homer, from Édouard Manet, and from the vulgarity of Frans Hals“.

In 1910, with the help of John Sloan and Walt Kuhn, Henri organized the Exhibition of Independent Artists, the first non-juried, no-prize show in the U.S., which he modeled after the Salon des Indépendants in France. Works were hung alphabetically to emphasize an egalitarian philosophy. The exhibition was very well-attended but resulted in few sales. 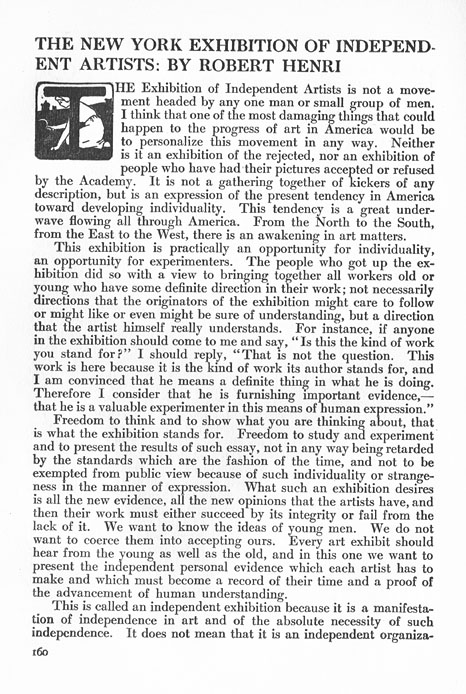 The relationship between Henri, Sloan, and Kuhn was a close and productive one at this time, and their collaboration would play a key role in the 1913 Armory Show. Biographer William Innes Homer writes: “Henri’s emphasis on freedom and independence in art [as demonstrated in the Exhibition of Independent Artists], his rebuttal of everything the National Academy stood for, makes him the ideological father of the Armory Show.”

The Armory Show, American’s first large-scale introduction to European Modernism, was a mixed experience for Henri. He exhibited five paintings but, as a representational artist, he naturally understood that Cubism, Fauvism, and Futurism implied a challenge to his style of picture-making. In fact, he had cause to be worried. A man, not yet fifty, who saw himself in a vanguard was about to be relegated to the position of a conservative whose day had passed. Arthur B. Davies, an organizer of the show and a member of The Eight, was particularly disdainful of Henri’s concern that the new European art would overshadow the work of American artists. 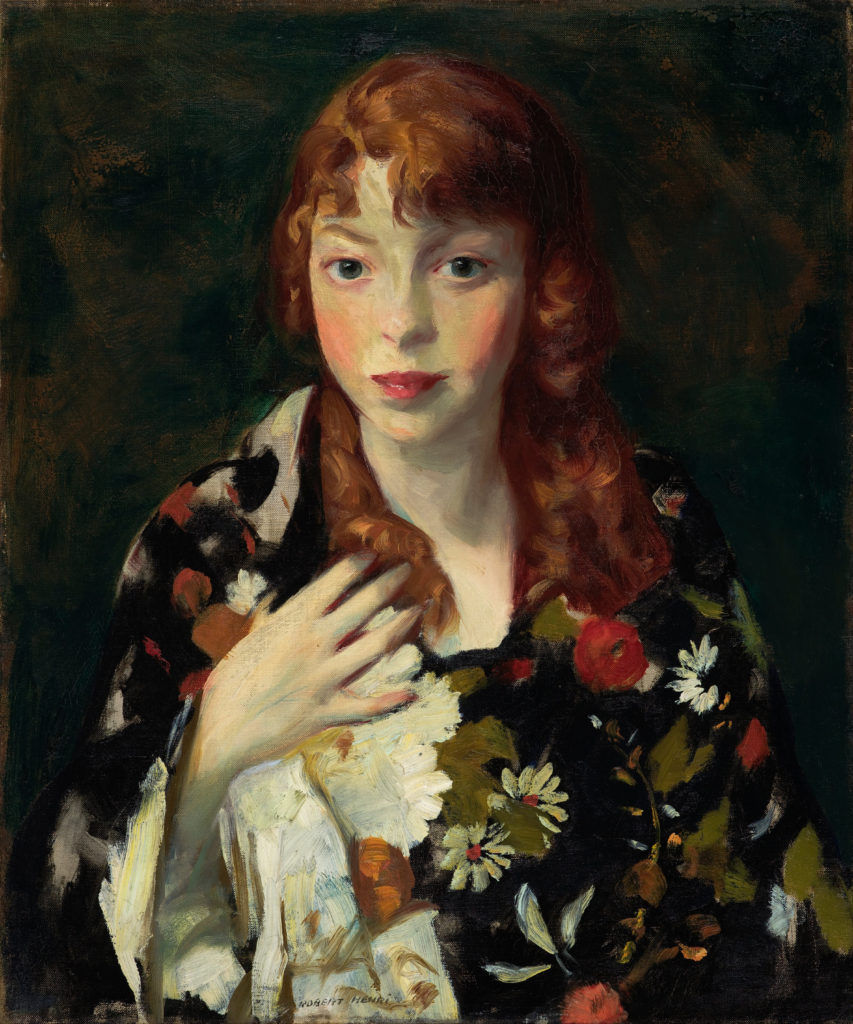 On the other hand, some Henri scholars have insisted that the reputation Henri earned in later histories as an opponent of the Armory Show, and of Modernism in general, is unfair and vastly overstates his objections. They point out that he had a keen interest in new art and recommended that his students avail themselves of opportunities to study it. Art historian Sarah Vure notes that “[as] early as 1910, Henri advised students to attend an exhibition of works by Henri Matisse and two years later he urged them to see the work of Max Weber, one of the most avant-garde of American moderns.”

Never a conservative politically, Henri admired anarchist and Mother Earth publisher Emma Goldman and taught from 1911 at the Modern School. Goldman, who later sat for a portrait by Henri, described him as “an anarchist in his conception of art and its relation to life.”

Henri made several trips to Ireland’s western coast and rented Corrymore House near Dooagh, a small village on Achill Island, in 1913. Every spring and summer for the following years he would paint the children of Dooagh. Henri’s portraits of children, seen today as the most sentimental aspect of his body of work, were popular at the time and sold well. In 1924, he purchased Corrymore House.

During the summers of 1916, 1917, and 1922, Henri went to Santa Fe, New Mexico to paint. He found that locale as inspirational as the countryside of Ireland had been. He became an important figure in the Santa Fe art scene and persuaded the director of the state art museum to adopt an open-door exhibition policy.

While traveling to the United States after visiting his summer home in Ireland in November 1928, Robert Henri suffered an attack of neuritis, which crippled his leg. (The underlying cause was discovered too late as metastatic prostate cancer.) He was hospitalized at St. Luke’s Hospital in New York. Gradually he became weaker, until he died of cardiac arrest early in the morning of July 12, 1929. His illness was not generally known, and came as a surprise in art circles. Upon his death, artist and pupil Eugene Speicher said “not only was he a great painter, but … I don’t think it too much to call him the father of independent painting in this country.” 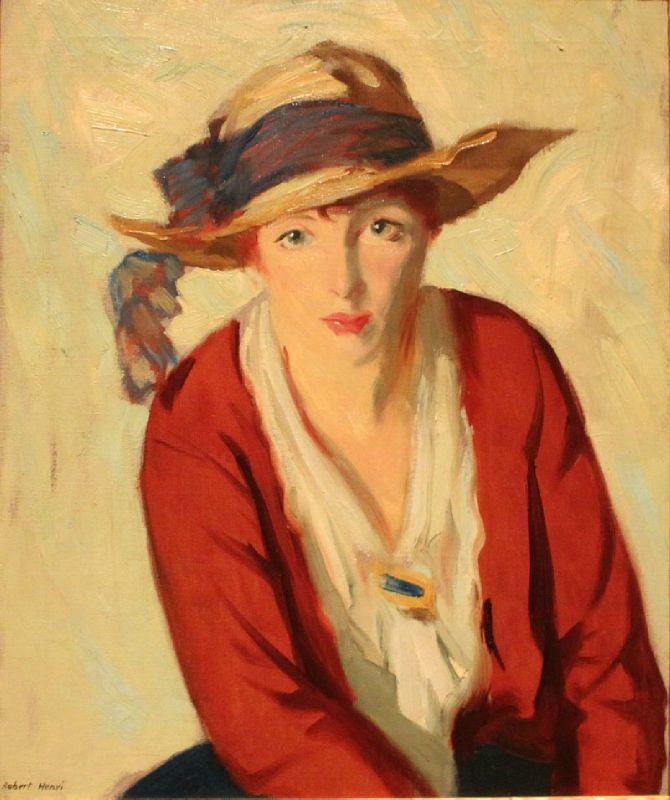 At his death, it was reported that he was cremated, and his ashes buried in the family vault in Philadelphia. He was eulogized by colleagues and former students and was honored with a memorial exhibition of seventy-eight paintings at the Metropolitan Museum of Art. 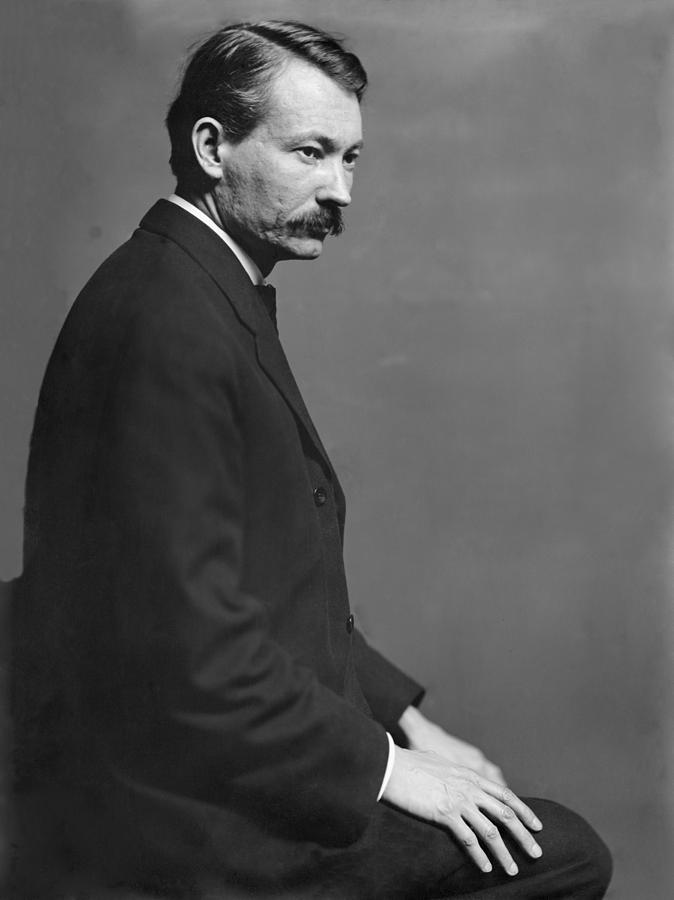