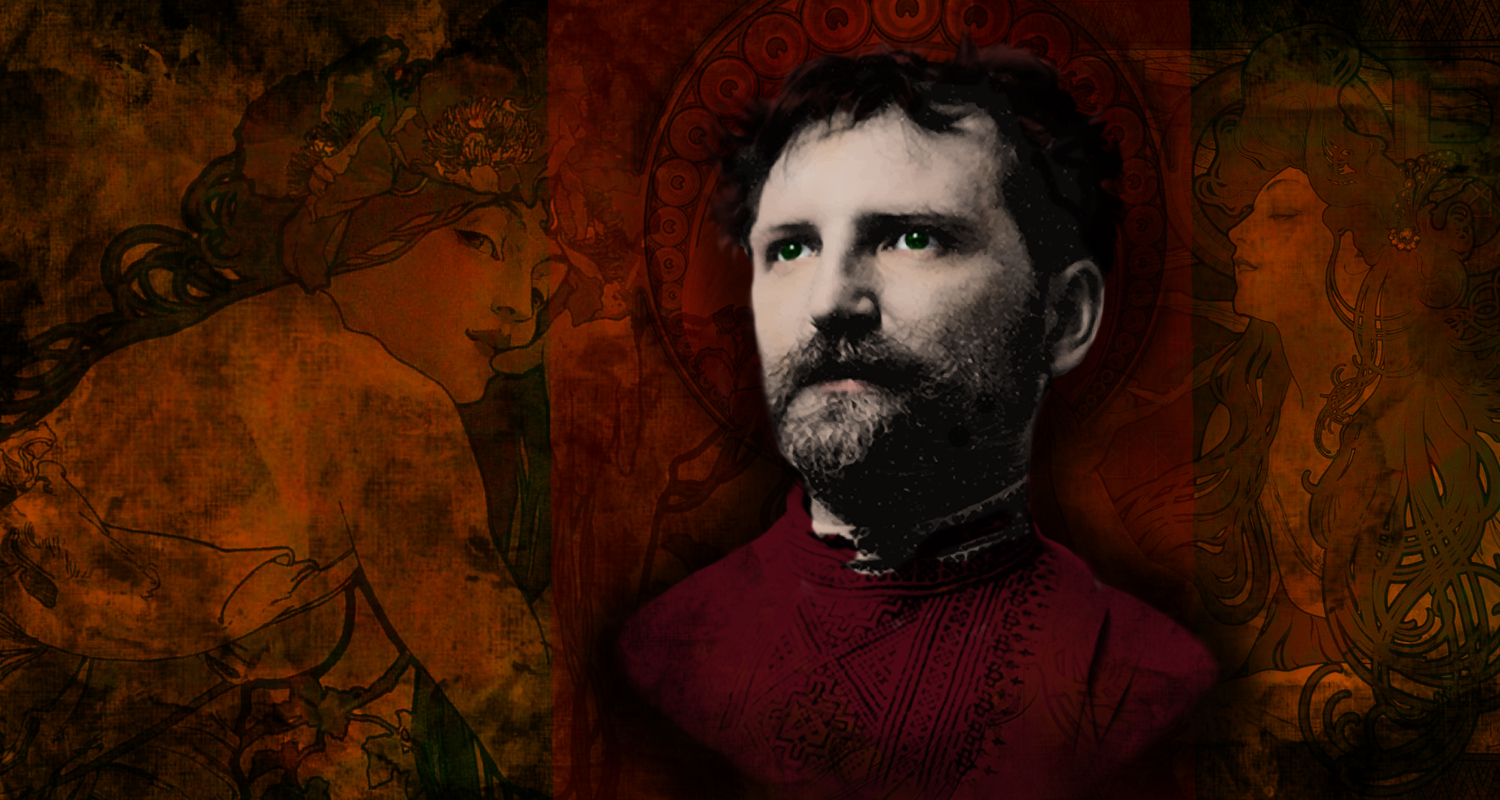 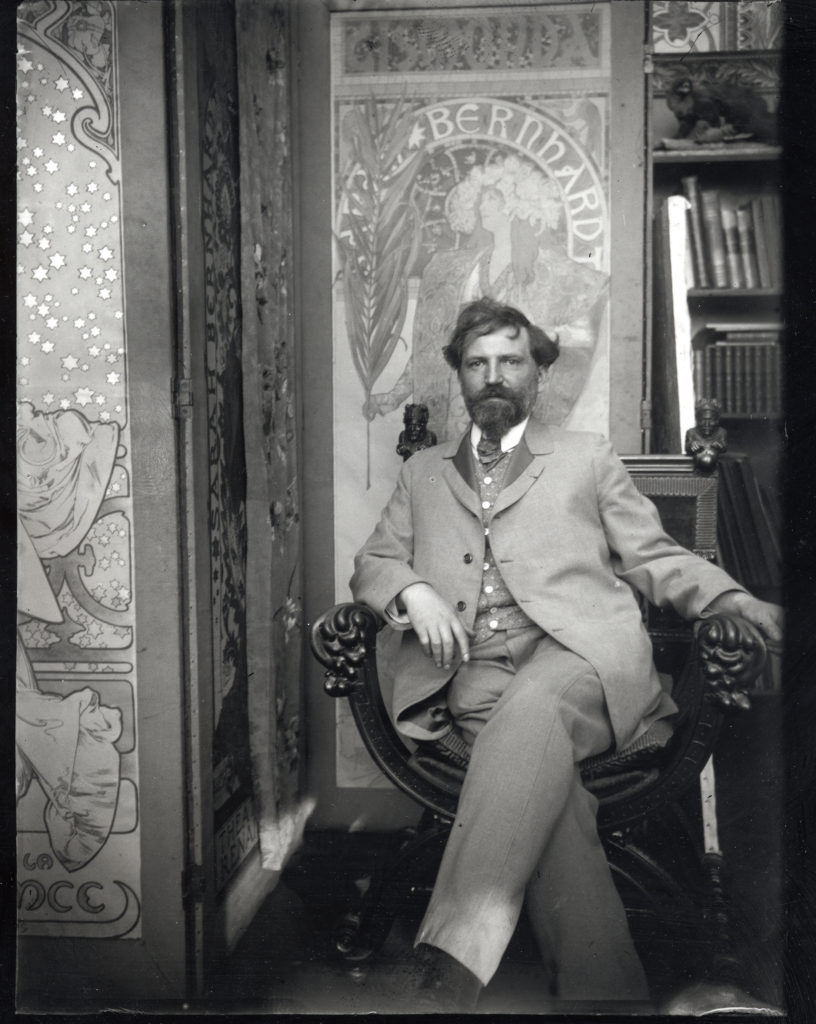 Alphonse Maria Mucha was born in the town of Ivančice, Moravia (currently a region of the Czech Republic). In 1871, Mucha became a chorister at the Saint-Peter’s Cathedral in Brno, where he received his secondary school education. It is there that he had his first revelation, in front of the richness of Baroque art. During the four years of studying there, he formed a friendship with Leoš Janáček who would become the greatest Czech composer of his generation.

Although his singing abilities allowed him to continue his education through high school in the Moravian capital of Brno, drawing had been his main hobby since childhood. He worked at decorative painting jobs in Moravia, mostly painting theatrical scenery.

In 1879, he relocated to Vienna to work for a major Viennese theatrical design company, while informally augmenting his artistic education. When a fire destroyed his employer’s business during 1881 he returned to Moravia, to do freelance decorative and portrait painting.

Count Karl Khuen of Mikulov hired him to decorate Hrušovany Emmahof Castle with murals, and was impressed enough that he agreed to sponsor Mucha’s formal training at the Munich Academy of Fine Arts.

Mucha moved to Paris in 1887, and continued his studies at Académie Julian and Académie Colarossi. In addition to his studies, he worked at producing magazine and advertising illustrations, as well as other commercial endeavors.

In December of 1894, he happened to go into a print shop where there was a sudden and unexpected need for a new advertising poster for a play featuring Sarah Bernhardt, the most famous actress in Paris, at the Théâtre de la Renaissance on the Boulevard Saint-Martin. Mucha volunteered to produce a lithographed poster within two weeks, and on 1 January 1895, the advertisement for the play Gismonda by Victorien Sardou was posted in the city, where it attracted much attention.

Bernhardt was so satisfied with the success of this first poster that she began a six-year contract with Mucha.
He produced a flurry of paintings, posters, advertisements, and book illustrations, as well as designs for jewelry, carpets, wallpaper, and theatre sets in what was termed initially The Mucha Style but became known as Art Nouveau (French for “new art”).

Mucha’s style was given international exposure by the 1900 Universal Exhibition in Paris, of which Mucha said, “I think [the Exposition Universelle] made some contribution toward bringing aesthetic values into arts and crafts.” He decorated the Bosnia and Herzegovina Pavilion and collaborated with decorating the Austrian Pavilion. His Art Nouveau style was often imitated.

The Art Nouveau style however, was one that Mucha attempted to disassociate himself from throughout his life; he always insisted that rather than maintaining any fashionable stylistic form, his paintings were entirely a product of himself and Czech art. He declared that art existed only to communicate a spiritual message, and nothing more; hence his frustration at the fame he gained by his commercial art, when he most wanted to concentrate on more artistic projects.

In the U.S., Mucha expected to earn money to fund his nationalistic projects to demonstrate to Czechs that he had not “sold out”. He was assisted by millionaire Charles R. Crane, who used his fortune to help promote revolutions and, after meeting Thomas Masaryk, Slavic nationalism.

Alphonse and his family returned to the Czech lands and settled in Prague, where he decorated the Theater of Fine Arts, contributed his time and talent to create the murals in the Mayor’s Office at the Municipal House, and other landmarks around the city. When Czechoslovakia won its independence after World War I, Mucha designed the new postage stamps, banknotes, and other government documents for the new state. 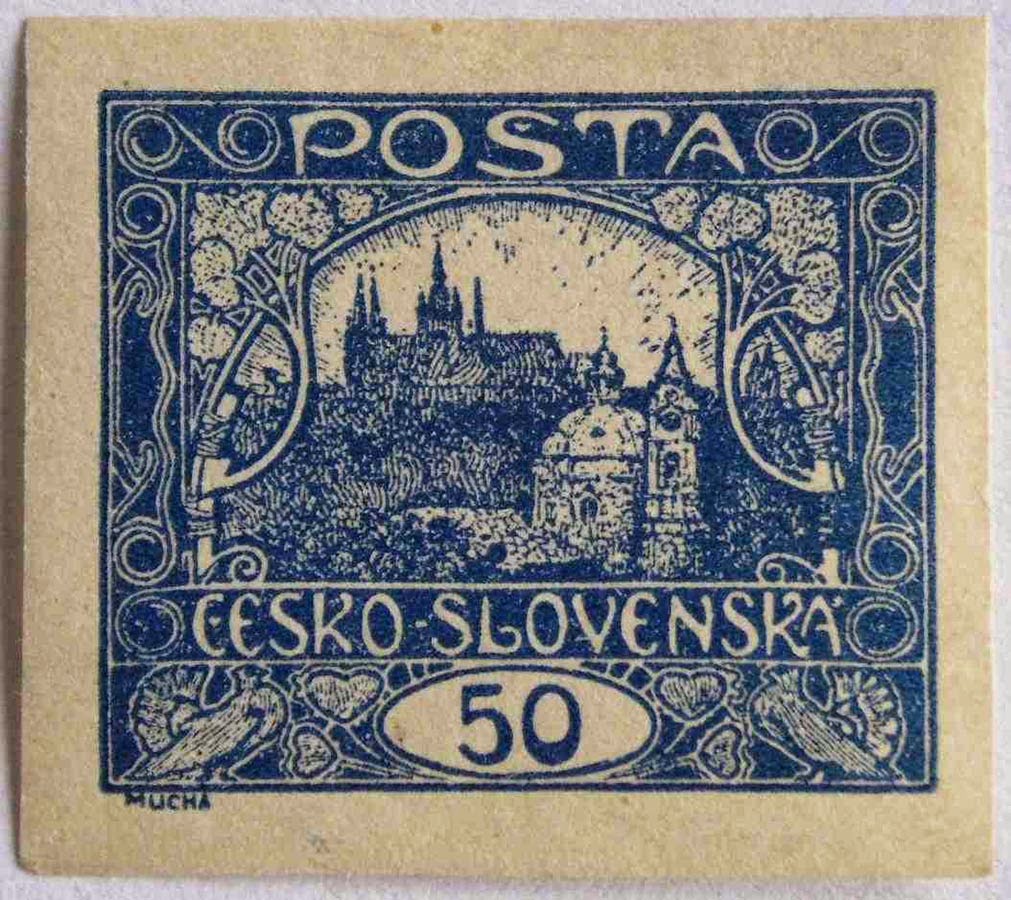 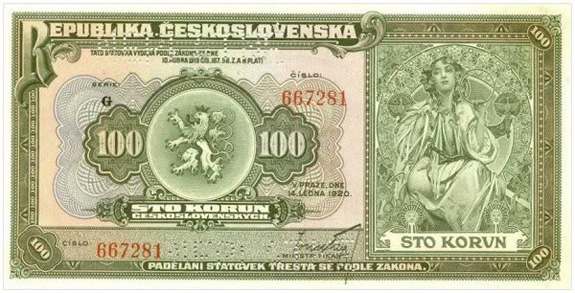 Mucha considered his publication Le Pater to be his printed masterpiece, and referred to it in the New York Sun of 5 January 1900 as what he had “put [his] soul into it”. Printed on 20 December 1899, Le Pater was Mucha’s occult examination of the themes of The Lord’s Prayer and only 510 copies were produced. 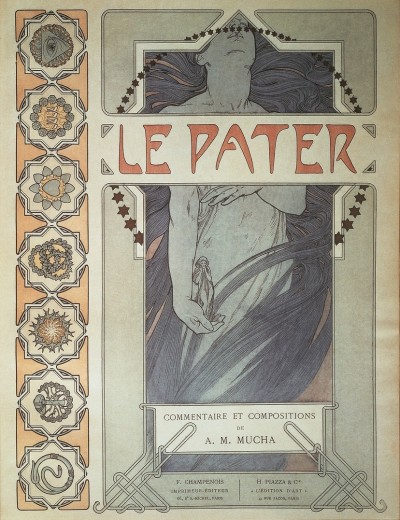 Mucha spent many years working on what he considered his life’s fine art masterpiece, The Slav Epic (Slovanská epopej), a series of twenty huge paintings depicting the history of the Czech and the Slavic people in general, bestowed to the city of Prague in 1928. He had wanted to complete a series such as this, a celebration of Slavic history, since he was young. From 1963 until 2012 the series was on display in the chateau in Moravský Krumlov in the South Moravian Region in the Czech Republic. Since 2012 the series has been on display at the National Gallery’s Veletržní Palace in Prague.

The rising tide of fascism during the late 1930s resulted in Mucha’s works and his Slavic nationalism being denounced in the press as ‘reactionary’. When German troops moved into Czechoslovakia during the spring of 1939, Mucha was among the first persons to be arrested by the Gestapo. During his interrogation, the aging artist became ill with pneumonia. Though released eventually, his health was severely weakened by this event. He died in Prague on 14 July 1939, due to lung infection, and was interred there in the Vyšehrad cemetery. 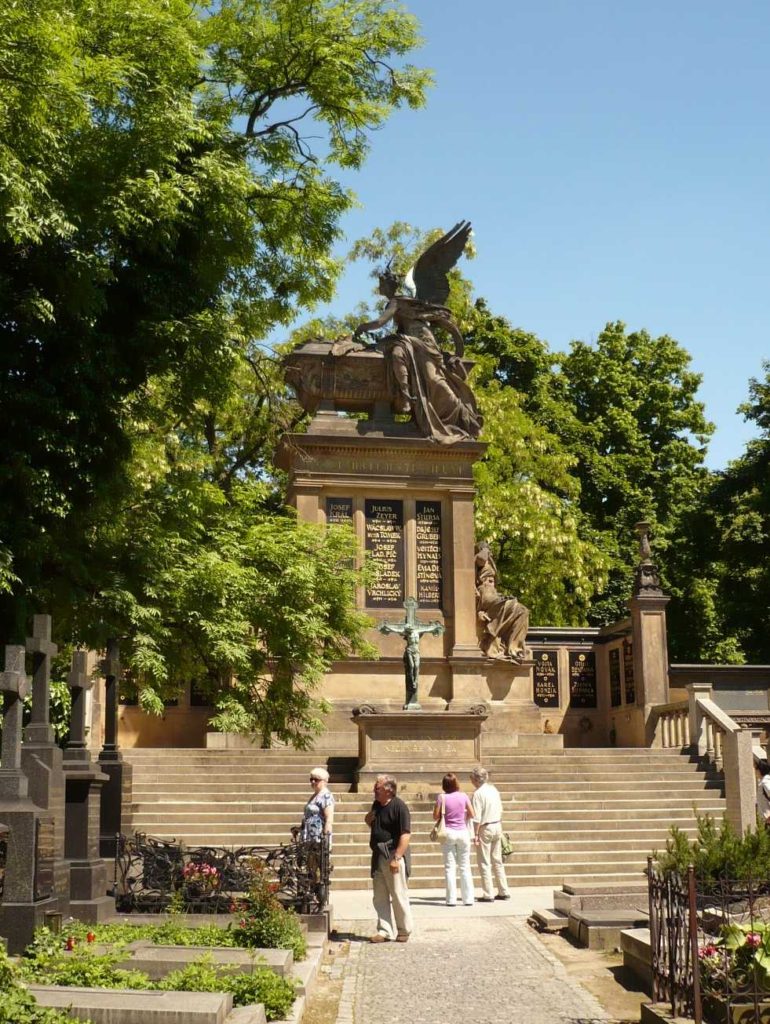 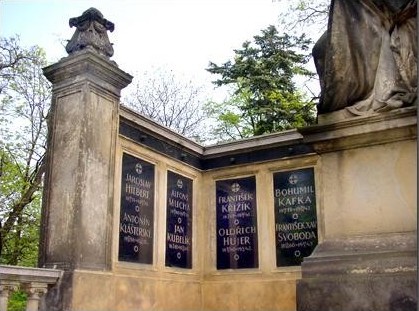 Although it enjoys great popularity today, at the time when he died, Mucha’s style was considered outdated. His son, author Jiří, devoted much of his life to writing about him and bringing attention to his artwork. In his own country, the new authorities were not interested in Mucha. The Slav Epic was rolled and stored for twenty-five years before being shown in Moravský Krumlov, and a Mucha museum opened in Prague, managed by his grandson John Mucha. 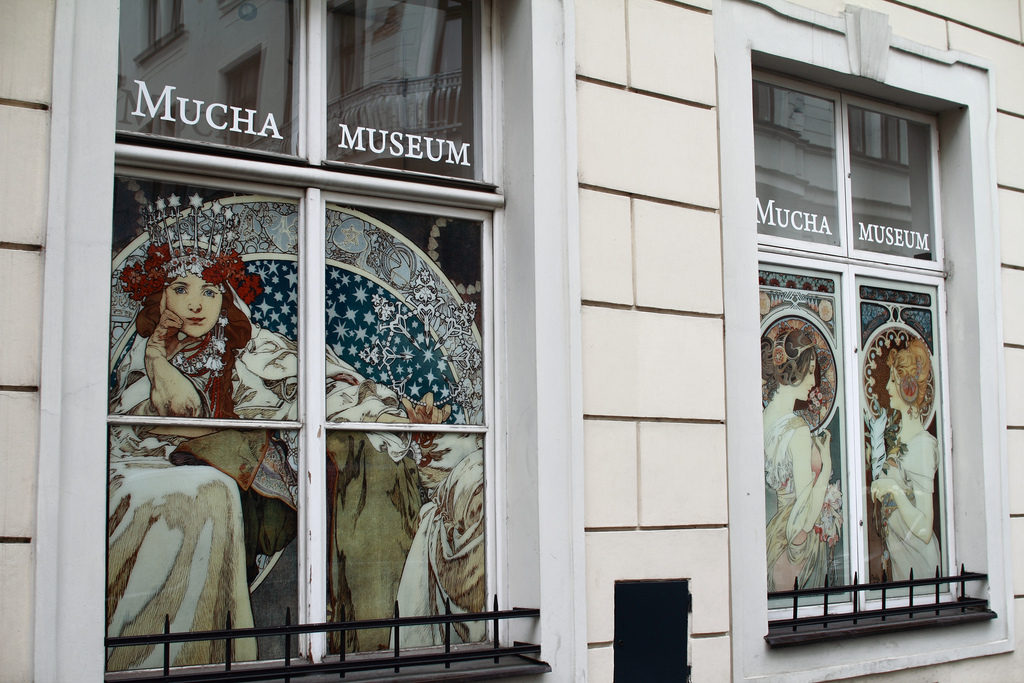 Mucha’s work has continued to experience periodic revivals of interest for illustrators and artists. Interest in his distinctive style experienced a strong revival during the 1960s (with a general interest in Art Nouveau) and is particularly evident in the psychedelic posters of Hapshash and the Coloured Coat, the collective name for British artists Michael English and Nigel Waymouth, and Bob Masse.

One of the largest collections of the artist’s works is in the possession of former world no. 1 professional tennis player Ivan Lendl, who started collecting his works upon meeting Jiří Mucha in 1982. His collection was exhibited publicly for the first time in 2013 in Prague.